38 Across is the 113th episode of M*A*S*H, the 16th in the fifth season of the show, which originally aired on CBS-TV on January 11, 1977. It was directed by Burt Metcalfe, and written by Everett Greenbaum and Jim Fritzell.

Hawkeye calls his naval doctor friend for help in a crossword puzzle but his message is too vague and results in an admiral coming to the 4077th to help with a supposed serious medical crisis.

During the latest lull in activity at the 4077th, Hawkeye received a New York Times crossword puzzle and becomes determined to finish it. Everyone in the camp contributes to the puzzle, and soon there is only one word remaining: five letters meaning "Yiddish; bedbug." No one can decipher this last clue.

Meanwhile, Klinger launches his latest Section 8 scheme- he plans to EAT an entire Jeep to prove how crazy he is! Potter remains unconvinced as he watches Klinger swallow lug nuts and a windshield wiper but the Corporal persists. Shortly after, Klinger rushes to the doctors in pain- he needs an emergency stomach pump!

In desperation to solve the crossword puzzle, Hawkeye contacts a Navy friend who knows some Yiddish named Tippy Brooks serving on an aircraft carrier. The communication lines are damaged during Hawkeyes' call but the doctors soon learn Tippy is coming to MASH 4077- along with his supervisor, Admiral Cox. They believe Hawkeye is requesting urgent assistance for a medical issue.

At first Tippy is glad to see his old friend but when Hawkeye explains the true nature of his call Brooks is horrified- if the Admiral learns he came all this way for nothing both doctors could face court-marial. Hawkeye attempts to pass off some unremarkable post-op cases as urgent issues for the Admiral (including Klingers' X-Ray showing a stomach full of machine parts) but Cox is unconvinced.

Father Mulcahey burst in to announce there has been a terrible accident with some locals; a supply truck overturned and some kerosene exploded while the Koreans were scavenging leftover fuel. Brooks & Admiral Cox both quickly jump into triage to help the burn victims, and the resulting surgery session lasts several hours.

As they prepare to leave the next day, Cox asked once again why Hawkeye had called them to MASH. Hawkeye is forced to confess the crossword puzzle problem, and Cox is outraged that they had someone come all this way just to learn "Vantz." Brooks is scared but Hawkeye is thrilled- the puzzle is finished!

Without a lot of wounded, Hawkeye and B.J. are bored, bored, bored. Luckily, they find a New York Times crossword puzzle and are determined to complete it, eventually getting the whole operating staff in on it.

They are down to one last clue - a five-letter term for a Yiddish bedbug - and none of them can answer it. Hawkeye gets so frustrated that he has Radar place a call to an old friend, Tippy Brooks, who is a crossword whiz and is currently serving on a Navy ship in Pusan Harbor. Brooks is in surgery when they call, so they leave a message saying they need his help urgently.

Unfortunately, Brooks takes the message a little too literally, and radios that he and an Admiral are on their way to the 4077th. Hawkeye and B.J. are bewildered, wondering how they're going to explain all this.

Meanwhile, Klinger is working on his latest ruse for getting his long desired Section 8 discharge. He plans to disassemble a jeep and EAT all the parts, one at a time.

Tippy Brooks (Oliver Clark) and Admiral Cox (Dick O'Neill) do in fact arrive, having had to avoid enemy fire and end up walking the rest of the way to the 4077th. Brooks asks Hawkeye what the emergency is, and after some hemming and hawing, Hawkeye tells him the reason they called.

Brooks is furious, and says they have to come up with some sort of story for the Admiral. They struggle to devise a suitable story (with Hawkeye still determined to find out the missing Yiddish word, much to Tippy's annoyance, especially since he doesn't know the answer).

They take the Admiral on a tour of Post Op, pretending a series of routine cases are confounding medical diagnoses.  One of the cases is Klinger, who has developed a stomachache from swallowing so many inedible items such as a windshield wiper and lug nuts with motor oil. The Admiral sees through all this, and is mad at the 4077th for wasting his time.

He's in the middle of a tirade when Father Mulcahy runs in and says there's been an accident involving some Korean civilians, who have suffered horrible burns. Brooks and Cox help out, and at the end of it, are impressed that this group of goofballs are in fact a top-flight medical unit.

After seven hours of surgery, Hawkeye, B.J., Col. Potter, Father Mulcahy, Brooks, and Cox wind down in the Mess Tent. A North Korean radio announcer, Seoul City Sue, brands "Captain Hawkeye Pierce" a war criminal because of his operating on a North Korean prisoner's head, stating that he was performing experiments.

The next day, Brooks and Cox leave. Cox wants to know the real reason Hawkeye summoned Brooks. Cox is incredulous, shouting, "You dragged us all the way up here just to get the word  VANTZ??!!" Hawkeye and Brooks are delighted. Vantz!

Frank Burns all this while has been has been playing with a ball bearing toy. He manages to get all the BBs in his toy in place--until Hawkeye upsets the toy; . Burns has a hissy fit..and then starts over aga 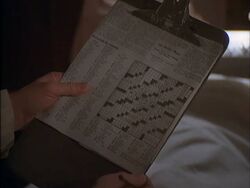 The crossword puzzle in Hawkeye's hands. 1 across is supposed to be "cast" and 1 down "chap" but as can be seen, both of these are 5 letters long. 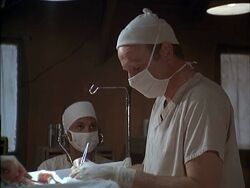 Gwen Farrell as an unnamed anesthetist. 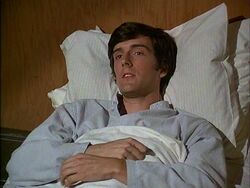 Rex Knowles as an unnamed American patient - Hawkeye says he is suffering from dehyration but when Admiral Cox asks if he wants a drink, he says no. 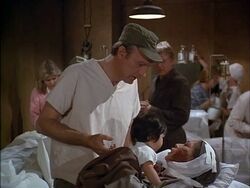 Momo Yashima as a Korean mother who is reluctant to let go of her child. 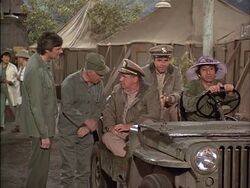 Cox and Tippy prepare to depart from the MASH. Klinger's hat looks familiar, like he has worn it before. (Its the hat he wore to his engagement to his first wife Laverne Esposito). In the background are Kellye Nakahara and Jennifer Davis.
Add a photo to this gallery

Retrieved from "https://mash.fandom.com/wiki/38_Across_(TV_series_episode)?oldid=25119"
Community content is available under CC-BY-SA unless otherwise noted.