Aid Station was the 19th episode of Season 3 of the CBS-TV series M*A*S*H, also the 67th overall series episode. Written by Larry Gelbart and Simon Munter and directed by William Jurgensen, it first aired on February 11, 1975.

Hawkeye, Houlihan, and Klinger go to an battalion aid station at the front. Working closely together under heavy fire and unsanitary medical conditions, the three return to camp with new found respect for one another.

Replacements are needed at an aid station and the 4077th is selected to provide a surgeon, scrub nurse and corpsman until regulars are assigned. Henry admits this is a dangerous assignment and requests volunteers. Margaret agrees to go, but no doctor volunteers, so burnt sausages are drawn from a bedpan to make the decision. Hawkeye is selected and Father Mulcahy picks a personnel card at random to select the corpsman: Klinger.

Each say their goodbyes: Klinger makes arrangements with Radar to dispense the Klinger Collection in case he doesn't return; Margaret gives Frank her “independent Margaret” soliloquy before giving him a hard kiss on the lips; Hawkeye shares a drink with Trapper and tells him he has a will in his locker.

The trio head off for the aid station without incident, save for a flat tire changed by Margaret. The aid station barely resembles a medical facility – the red cross on the roof was blown away by enemy fire. They meet Dever, the lead medic, and prepare a makeshift triage and operating room which is literally out in the open. Artillery shells crash all around and wounded soon pour in, making the anemic working conditions even worse. Margaret is pressed into surgical duty while Klinger doubles as a nurse. Back at camp, tension is causing frayed nerves. Frank needs Henry's help to close an incision; a nervous Radar gets Trapper's permission to sleep in Hawkeye's bunk; an agitated Henry pays a late night visit for a nightcap and keeps everyone awake with his rambling.

All's quiet overnight at the aid station, where all are sleeping except Hawkeye and Margaret. Margaret is nervous about snipers, so an exhausted Hawkeye bunks down next to her, sharing a blanket.

Next morning, replacements arrive and Hawkeye, Margaret and Klinger drive back to the 4077th. Hawkeye stops short of camp to let Margaret know she is his “favorite officer in the U.S. Army” and Klinger echoes the sentiment. Klinger replaces his helmet with a woman's hat, announces he's ready for the Army again, and the trio make a triumphant entry into camp. Things are not quite the same: Hawkeye tells the truth that there was nothing between him and Houlihan (which Trapper has a hard time believing); Frank shows his jealousy when Margaret won't return his affections; Klinger is pretty angry at Radar for selling his entire collection of dresses.

Next dinner, as Trapper and Frank whine and complain about trivial things like the food and coffee, Hawkeye and Margaret silently toast each other over their new-found respect for each other. 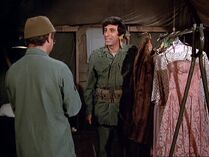 Klinger tells Radar what to do with his collection if he doesn't come back from the aid station. The mink coat is for Lieutenant Brown. 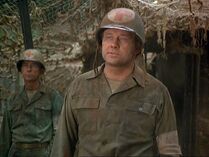 Tom Dever (uncredited) greets Hawkeye, Margaret and Klinger on arrival at the aid station. He is not wearing any rank insignia but a lead aidman at an aid station would normally be a sergeant. 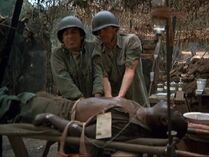 Hawkeye gets Klinger to perform the roles of a surgical nurse - from the look on his face, Klinger has probably never been that close to the action before. 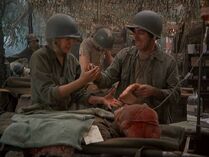 Hawkeye (in the background) asks Margaret to start the operation without him. Margaret is hesitant. Klinger has just passed her a scalpel. 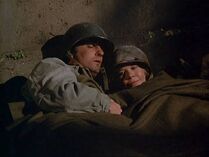 Margaret is worried about snipers so Hawkeye bunks down next to her and covers her with his blanket. 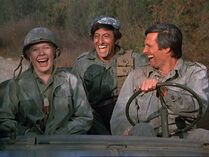 Klinger exchanges his helmet for a hat - he's ready for the army now. The trio drive into camp singing "Over hill, over dale...."
Community content is available under CC-BY-SA unless otherwise noted.
Advertisement