As Time Goes By

As Time Goes By

As Time Goes By was the 255th overall episode of the CBS television series M*A*S*H, and the 15th of Season 11; the episode had the distinction as being the series' final half-hour episode and the last episode to be filmed. Written by Dan Wilcox and Thad Mumford and directed by Burt Metcalfe, the episode aired on February 21, 1983, and was repeated on September 12, 1983. The episode was followed by 2½-hour TV film-episode special "Goodbye, Farewell, and Amen", which aired the very next week. Although it was the series finale, it had been shot much earlier in the season.

Margaret asks for contributions for a 4077th "time capsule".

In the O Club, Winchester reads a newspaper article mentioning a time capsule being buried in Los Angeles. He thinks its a useless gesture, but Margaret likes the idea, and starts an effort to create one for the 4077th.

Hawkeye, also initially skeptical, changes his mind and wants to be included in the selection process, much to Margaret's distrust.

B.J. pulls a mild joke on Rizzo, passed out in the O Club. Even though its just a joke, Rizzo promises revenge.

The time capsule effort is interrupted when wounded arrive, including a sniper who is alleged to have shot a G.I. Klinger is put in charge of incarcerating the prisoner, a beautiful young Korean woman named Soon-Lee (Rosalind Chao). She protests her innocence, but Klinger won't listen.

Later, Margaret and Hawkeye resume their search, and Margaret wants something military. Potter demurs, but thinks Hawkeye's suggestion of a bunion pad (of great use to Potter after so many long sessions in OR) is a great idea. Margaret is aghast.

The G.I. shot by the sniper is missing - he and the chopper flying to the 4077th never having arrived. Soon-Lee protests her innocence, saying that she got separated from her family and if she doesn't find them soon, she may never see them again. Klinger, at least partly sympathetic, says he can't let Soon-Lee go until I-Corps tells him to. He tries to make Soon-Lee understand, but she hurls her tray of food at him in fury.

The missing chopper arrives the next morning, with the pilot explaining that the chopper's fan belt busted, forcing them to land. A sniper's bullet hit their radio, leaving him unable to call anyone. The chopper pilot (Michael Swan) quietly picks up a new fan belt, and leaves.

Rizzo gets revenge on B.J. by using a dud grenade to force him out of the showers onto the compound, sans clothes. B.J. now also swears revenge, which he gets with the help of Winchester.

B.J. then operates on the wounded man, and Klinger takes possession of the bullet. He determines that it doesn't fit the gun Soon-Lee was holding when she was picked up, proving she's innocent. Klinger frees her, and he and Father Mulcahy driver her to a refugee camp where Mulcahy thinks her parents might be.

Meanwhile, the time capsule effort continues on its parallel tracks - Margaret collects the usual items, with Hawkeye's being a little more informal: a bottle of cognac from Winchester, a stale piece of toast from Igor, and Klinger's Scarlett O'Hara dress. Margaret is sure Hawkeye is doing this to mock the time capsule.

In Post Op, they talk to the wounded soldier, and he tells an amazing story: the chopper pilot, with a shot-up chopper, could only fly 200 yards at a time, so he would walk that far ahead, all alone, finding a place to land. He'd then walk back, fly to the new location with his wounded cargo, and then start all over again. This went on all night, and the young man is sorry that the pilot left so unceremoniously before he could thank him.

Klinger, Father Mulcahy, and Soon-Lee make it to the refugee camp, only to be cruelly disappointed, when its obvious that these are not Soon-Lee's parents.

Later that night, Margaret and a bunch of the others break ground and prepare to bury the time capsule. Rizzo donates some spark plugs, Kellye donates some combat boots, and Col. Potter donates one of his favorite Zane Grey novels.

At last minute, Hawkeye, B.J., and Winchester show up with a trunk full of their own items, planning to bury an alternate time capsule. Margaret protests, but then Hawkeye shows what's inside: the broken fan belt from the chopper, reasoning that since nobody noticed the pilot while they had a chance, they should at least make sure his story survives. Hawkeye then lifts Radar's teddy bear, added to represent "All the soldiers who came over here as boys and went home as men." B.J. offers up a favorite fishing lure, one that Hawkeye told him belonged to Henry Blake - it stands for "All the men that never made it home." Father Mulcahy puts a set of boxing gloves in the capsule, hoping that any future wars will not need anything more sufficient to fight with. Winchester adds a bottle of cognac - pointing out that the drink will be 100 years old when the capsule is opened again, and a magnificent treat to whomever finds it.

Margaret accepts these items gracefully, but draws the line at Klinger's Scarlett O'Hara dress. Klinger and the others protest, pointing out that the dress can also represent something important - like "the girls [we] left behind!" Finally she relents, but insists it be his basic black dress, not "that awful get-up." Klinger praises her "impeccable taste" and runs off excitedly to get it. That had been his first choice in any case.

Margaret thanks Hawkeye for his contributions, and he says that as long as they're burying things, "Why not the hatchet?"

Later, Hawkeye, B.J., and Winchester head to the O Club, where on the way they discuss the long-gone Frank Burns. They meet up with Klinger, who is taking Soon-Lee to the O Club as well. The place is packed, and Klinger is sure they'll never get a table.

Winchester is confident a few tables will open up shortly, producing the dud grenade he took from Rizzo. 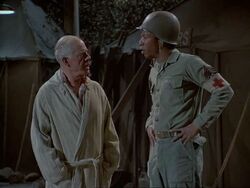 Wesley Thompson plays a corpsman who tells Potter they sent out Stoddard by chopper earlier in the day but Potter says he hasn't arrived. 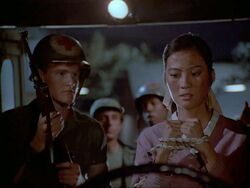 This corpsman guarding Soon-Lee looks very familiar but he is not credited. 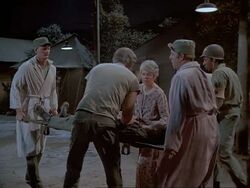 The nurse in the floral nightgown doesn't look very recognizable but she is Jo Ann Thompson according to the shooting schedule. 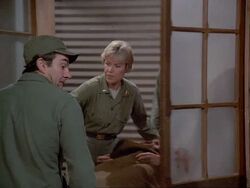 Brigitte Chandler billed simply as "Nurse #2". She previously appeared in "U.N., the Night and the Music". 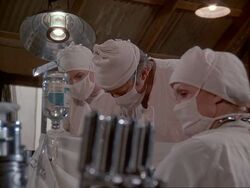 Brigitte Chandler is also here in the O.R., according to the call sheet for this scene. She is probably the one to B.J.'s right. The seated anesthetist is not named in the call sheet. 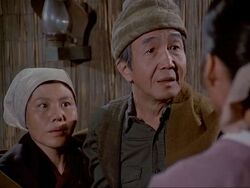 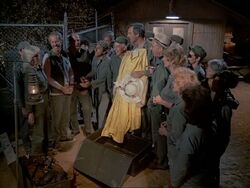 This last scene to be shot is good for identifying the extras. There is also footage of the rehearsals for this scene. Jan Jorden is the tall one next to Mulcahy. Next to her is Jennifer Davis. Gwen Farrell is nearest camera. Alberta Jay is behind Jennifer Davis, in shadow. 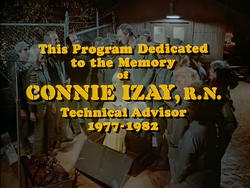