Bottoms Up was the 15th episode of Season 9 of the CBS-TV series M*A*S*H, also the 213th overall series episode. Written by Dennis Koenig and directed by Alan Alda, it originally aired on March 2, 1981.

Margaret finds out that a long-time friend still has a very serious, drinking problem. Meanwhile, Hawkeye is labeled a villain for supposedly pulling one too many pranks on Charles, but the real prank is on both men.

An old friend of Margaret's, Captain Helen Whitfield (Gail Strickland), is serving out her final weeks in the Army at the 4077th. She and Margaret spend some time playing cards, and Helen keeps winning. Margaret wants to keep playing, but Helen begs off and says she has to write a letter to her brother.

The next morning, wounded arrive, and Helen seems a little under the weather. Nurse Kellye offers to cover for her, but Helen declines. During the session, Margaret asks Helen for a bottle of AB+, but when she grabs AB- instead, Klinger notices and quietly points out her mistake. She quickly grabs a correct bottle, remarking that the bottles should be marked better, but Klinger is confused as the labels were already well-marked.

Near the end of the session, Hawkeye and B.J. pull a prank on Charles, with Hawkeye pretending to be a wounded patient and dropping Charles' pants in front of everyone. The prank goes over like a lead balloon, and when it comes time to fess up, B.J. leaves Hawkeye holding the bag. Later in the Mess Tent, Hawkeye is disgruntled when he is greeted with jeers while Charles is treated like a hero.

Later that night, Margaret and Helen have drinks in the Officer's Club, and once again before the evening is over, Helen takes off, claiming she has to write a letter to her brother. When Margaret comments that she just wrote him the other night, Helen claims that was a letter to her father.

Also in the Officer's Club, Hawkeye and B.J. (and this time Klinger) plan a prank where Hawkeye plans to make himself the victim, and to get back in good graces with the rest of the camp: Hawkeye applies glue to a chair that he himself will sit in, thereby losing his own pants. But when Hawkeye sits down he isn't stuck, and Charles winds up sitting in the glue chair and has to be cut out of it by Klinger. Pretending to be embarrassed himself, B.J. says he wants no part of any of Hawkeye's future stunts and leaves. Charles, calling Hawkeye "Rear Admiral Pierce", is again exalted and asks Klinger to get a new pair of pants from the supply room ("maybe several"), while a confused and indignant Hawkeye is again being jeered by the others who begin throwing handfuls of peanuts and pretzels at him.

In the Supply Room, Klinger finds Helen alone in the dark and very drunk. The next morning he reluctantly tells Potter about it. He also mentions how he had to stop Helen from giving a wrong blood type, which he had thought little of at the time. Potter goes to talk to Margaret about the drunkenness and the incident in the OR, who vehemently defends Helen and accuses Potter of a double standard, but Potter pulls rank and shouts her down. When he asks Margaret about Helen, she assures him it's not a problem, but her words are only to placate Potter; she then storms off to the nurses tent to confront Helen, saying she just had to lie for her, and demanding to know if she's back on the booze, and if her near-fatal mistake in the OR had anything to do with it. Helen defends herself, saying it's not a problem, but Margaret is adamant; she transfers Helen to the lab, as it's unsafe for her to work in the OR, and any more foul-ups will go on her permanent record. Helen swears she won't let her down.

Still determined to clear his name, Hawkeye asks Klinger to again help him to pull another prank, remarking that Charles' pants are off limits, but when he declares that the next gag, that he again plans to pull on himself, is not going to backfire like the one in the Officers Club, Klinger suddenly has a realization and tells Hawkeye, "I think the joke really was on you", and reveals that B.J. had told him to switch the chairs so that Charles would get it again. In the Swamp, Hawkeye tells Klinger's story to Charles, and also mentions that Charles' getting de-pants'd in the OR was B.J.'s idea as well. Hawkeye then shares his observation that B.J. has been deviously orchestrating things and then sitting back to watch the fun while Charles gets humiliated and Hawkeye gets blamed. Charles becomes convinced that Hawkeye is telling the truth and marvels at B.J.'s brilliance, but then Hawkeye reminds Charles of the 'old saying', "He who lives by the joke shall die by the joke", and with his help, Hawkeye orchestrates a revenge prank on B.J.

The next morning, B.J. wakes up in his cot-- not in the Swamp, but in the Nurses' Tent; to his horror, he finds he is naked underneath his covers, which have been tightly fastened to the cot so he can't get out of bed without exposing himself. When the PA announces incoming wounded, B.J. has no choice but to get up, covering his genitals with Helen's pillow as he backs out the door; as the door opens he is treated to a barrage of catcalls by most of the others waiting right outside, including Hawkeye and Charles, the latter of whom is snapping pictures with a camera and saying, "Smile, Hunnicutt. Say 'cheesecake'!"; the PA announcer comes back on the loudspeaker saying, "Sorry, Doctor Hunnicutt. They made me do it!".

Days later in the Mess Tent, Helen starts to freak out as she gets a tray of food, claiming she sees things crawling in it, and that they're now crawling all over her. She drops her tray, and starts screaming and convulsing, and Potter and Margaret grab her, trying to calm her down. Potter explains to a bewildered Igor that Helen has the DTs (delirium tremens) - which can happen when someone is "drying out." Horrified, an apologetic Margaret tells Potter she would've said something if she had known Helen's drinking was severe enough for her to go through withdrawal. Potter accepts this, claiming Helen fooled a lot of people, but worst of all, herself. Helen starts to calm down, and quietly clams she is staying true to her promise, and Margaret agrees.

Weeks later in the Officers Club, Margaret reads a letter from Helen to Potter and Klinger; Helen has joined an Alcoholics Anonymous support group back home, and mentions that it's easier to accept that she has a problem knowing that she's not alone. Potter remarks that the biggest step to recovery is admitting you have a problem. Margaret and Potter toast her with two Scotch and waters- without the Scotch. Charles and Hawkeye are sitting at the bar mulling through the pictures of B.J. when he comes in and confiscates them, but when Hawkeye tells him about the 8x10 glossies tacked to the camp bulletin board, B.J. runs out in a panic, and Hawkeye and Charles share a huge laugh of satisfaction. 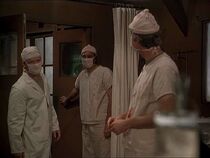 Bill Snider in the first of his many appearances as various corpsmen and other bit roles in the series. He is on the left announcing a new patient. 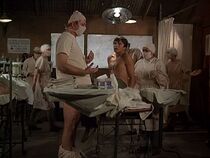 Jimmy Baron as the "fake" patient that is part of a practical joke played by Hawkeye and B.J. on Winchester. 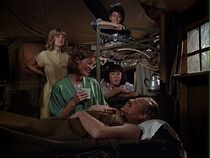 Shot of the B.J inside the nurses' tent. Shari is on the top bunk and Kellye below. Whitfield is the one in the green robe. The nurse in the yellow pajamas is not credited and we don't know who plays her. 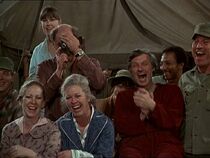 Shot of the crowd gathered to "welcome" B.J. when he emerges from the nurses' tent. Laurie Bates (in blue) gets a credit but she doesn't seem to have any lines and does almost as little or as much as Jo Ann Thompson who is next to her.
Community content is available under CC-BY-SA unless otherwise noted.
Advertisement