Bug Out were the 98th and 99th episodes of the CBS-TV series M*A*S*H, and, also the hour-long, two part season premiere episode arc of the fifth season of the series. Written by Jim Fritzell & Everett Greenbaum and directed by Gene Reynolds, Bug Out first aired on September 21, 1976, and was repeated March 29, 1977.

When a rumor for a camp relocation turns out to be real, Hawkeye, Margaret, and Radar volunteer to stay behind for a patient who cannot be moved.

Radar gets a phone call that the MASH is scheduled for a surprise practice "bug out", but that it's to remain top-secret. He unwisely tells Klinger, who tells Burns and Houlihan, and by the time the news gets to Col. Potter, it's assumed the camp is under a full-scale attack.

Col. Potter tries to stamp out the rumors, to no avail. When a patient with spinal-cord damage arrives, Hawkeye is initially reluctant to operate because, once he's been worked on, the patient can't be moved for 24 hours. Potter insists they aren't bugging out, so Hawkeye (with Margaret and B.J. assisting) goes ahead. But as soon as they start, the 4077th gets a word from HQ that they are, in fact, bugging out.

This sends everyone into a frenzy. Col. Potter puts Frank in charge (he has no choice, since Burns is second in command) while he scouts locations for a new MASH.

Hawkeye says he's staying behind to look after the patient, and Margaret volunteers to stay as well. And, at the last moment, as everyone is riding out of camp, Radar stays behind, too.

Col. Potter, B.J., and Frank lead the caravan to the new location for the 4077th, and walk up to what looks like an abandoned hut. Except that - it's not abandoned, it's full of "business girls."

Frank wants to evict them by force, but Potter wants to try and bargain with them. No matter what he offers, they refuse to turn over the building. That is, until they see Klinger's array of clothes, which they moon over. Potter asks Klinger to give up The Klinger Collection, as an act of patriotism ("Do it for...Toledo."). Klinger reluctantly agrees.

Meanwhile, back at the 4077th, the spinal cord patient is slowly recovering. Two jeeps drive into camp, doing reconnaissance on the area, and the soldiers are surprised when Hawkeye and Radar approach. When asked by Hawkeye where the front is, one soldier replies: "You're standing on it."

The next day, the patient is well enough to be flown out by chopper. After the chopper takes off, Hawkeye, Margaret, and Radar climb in a jeep to catch up with the rest of the unit. Hawkeye stops in the middle of the camp, remembering how much they all went through there together. He goes to start the jeep up again, but it won't turn over. When they hear a loud clamor of people coming up the road, they assume it's the Chinese and try to hide - which proves difficult, since all that's left of the tents are the framework.

They start to panic as the noise gets louder, but are relieved to see that it's the rest of the 4077th, led by Col. Potter. He tells them that the U.S. retook the same piece of land, so they have been ordered to return to home. Relieved, Margaret climbs aboard Sophie, her arms around Col. Potter as he manages the traffic.

In a final scene, things at the 4077th are returning to normal, as Hawkeye and B.J. resume their latrine-digging-watching (as they were in the beginning of the episode). 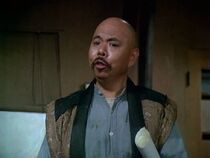 Cho Man Chin (Richard Lee-Sung) turns up to sell Potter a new site for the 4077th when he hears they are bugging out. 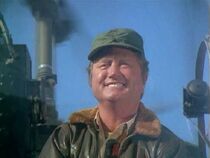 Barry Cahill as a chopper pilot. His name is not given in the credits but Potter does call him "Barry" (the actor's real first name). 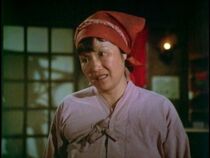 Frances Fong in her only appearance on M*A*S*H playing the Rosie character. 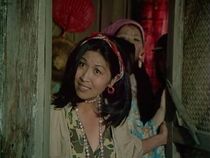 Eileen Saki as the Korean madam. Saki will return later to play Rosie. 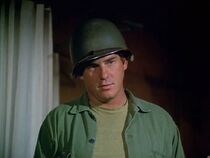 James Lough (a.k.a. James Carroll) in the first of his various appearances on M*A*S*H. Here he is playing a 4077th enlisted man. Burns sends him to take Hawkeye's chair. 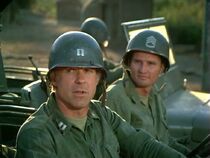 Don Eitner as an intelligence captain, His name is not given in the credits but he does introduce himself to Hawkeye as Captain Stevens.
Community content is available under CC-BY-SA unless otherwise noted.
Advertisement