Byron Chung made a total of seven appearances on the CBS-TV series M*A*S*H in various roles spanning the 11 seasons. He first appeared in the Season 1 episode "Germ Warfare", and make his last appearance as Lt. Chong-Wa Park, a North Korean fighter pilot who bailed out of his plane, and whom endures bribery offers from a U.S. Army PR man, Major Reddish (Jeffrey Tambor) in the Season 11 episode "Foreign Affairs".

A character actor who mostly plays bit roles, Byron has made, in addition to his M*A*S*H episode appearances, appearances on such TV series as Salvage I, which starred Andy Griffith, Room 222, and Get Christie Love. Byron has also appeared in the films When Hell Was in Session (1979) and The Letter (1982). 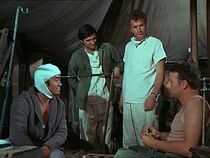 Chung as the P.O.W. from "Germ Warfare". 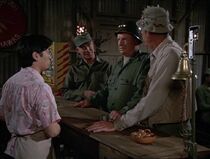 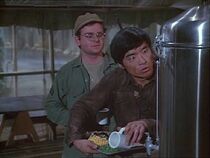 As a North Korean soldier in "Dear Ma". 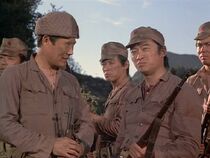 With Soon-Tek Oh (left) in 'The Yalu Brick Road". 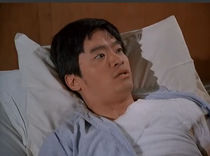 As Lt. Chong-Wa Park in "Foreign Affairs".
Add a photo to this gallery

Retrieved from "https://mash.fandom.com/wiki/Byron_Chung?oldid=19110"
Community content is available under CC-BY-SA unless otherwise noted.