Change Day was the 131st episode of the CBS-TV series M*A*S*H. The episode, which was the ninth episode of Season 6, was written by Laurence Marks and directed by Don Weis. It originally aired on November 8, 1977.

Charles launches a get-rich quick scheme involving the coming change of Army scrip, while Klinger comes up with a new plan to get back to the States: get admitted to West Point and deliberately get kicked out.

Col. Potter gets word that I Corps is changing the official Army scrip (what they use for money instead of actual U.S. currency), and makes the announcement that everyone should get their money ready for the big exchange the following day.

Winchester sees this an opportunity to make some extra money - he hatches a plan to buy up all the old, soon-to-be-useless scrip from all the Korean villagers (which, technically, they shouldn't have in the first place) and exchange it for new scrip.

The problem is, his plan is close to highway robbery - he's only offering 10 cents on the dollar, keeping the other 90 cents for himself. When Hawkeye and B.J. get word of the plot (from Winchester's Korean tailor, who confides in them), they hatch a plan to thwart "a robber baron who makes house calls."

Elsewhere, Klinger has happened upon a new scheme to get out of the Army. His Uncle Gus has connections with a certain Senator back home, and this way, he secures acceptance to take the entrance exam to West Point Military Academy in New York. The plan is to pass the exam, get shipped to the Academy, flunk out, then head back to Toledo.

Meanwhile, a soldier, Corporal Boone, who was operated on by Hawkeye, gets a visit from an M.P., who expresses his gratitude to the doctors for saving his buddy's life. Boone asks the M.P. to exchange $400 in old scrip for the new scrip for him, as he'll be laid up for the next 6 weeks and can't do it himself. The M.P. is glad to oblige.

When Hawkeye and B.J. learn of Winchester's scheme, they ask the M.P. for a favor, but he says he can't because he'll be exchanging Boone's scrip for him. Hawkeye offers to exchange the $400 for him if he does the favor, to which Boone and the M.P. both agree.

Hawkeye has the money on him while dining in the mess tent that evening. A fight breaks out between Igor and Zale, and when everyone runs out to watch it, someone swipes the $400 from the table. Hawkeye is devastated and breaks the bad news to Boone, who is understandably upset, thinking Hawkeye swiped it for himself. When Father Mulcahy learns of the theft, he is so incensed he makes an impassioned appeal on the PA system for the return of the money.

Klinger reports to Col. Potter's office, where he and B.J. administer the West Point entrance examination to him. All his confidence disappears as he reads the first question. He begs for a coffee break, but Potter reminds him he has 3 hours to complete the exam. B.J. quips, "It'll take him that long just answer that question." After 3 hours, Klinger has not answered a single question correctly.

While Winchester is on his way back from fleecing the masses, Hawkeye and B.J. have the M.P. force Winchester to stop, saying the main road has been mined. This makes Winchester have to grab all his money and walk to the 4077th. After an hour, he arrives at camp, only to be stopped by Klinger - who is currently trying a scam acting as by-the-book Navy Cadet - keeping anyone from entering the camp while the scrip exchange is taking place, which is SOP.

Winchester, stuck outside with piles of soon-to-be-useless scrip, begs Hawkeye and B.J. to do the money exchange for him. They agree to, but only offering him the original 10 cents on the dollar rate he offered the Korean villagers. They take just enough to give Boone back his lost $400, and give the rest back to Winchester, who storms off, his plan to make a killing having gone up in smoke.

Hawkeye presents Boone with $400 in new scrip, and Boone thanks him and apologizes for accusing him of theft. Father Mulcahy rushes in excitedly with another $400 in new scrip - apparently, the original thief was convicted by his speech and returned the money to Mulcahy's tent. Hawkeye gives the extra money back to Mulcahy, telling him to "take the orphans out to dinner and a show." Father Mulcahy is overwhelmed at the impact his message had, and considers doing a weekly broadcast. Hawkeye muses, "I wonder if thou shouldst?" Mulcahy blushes and quips, "Well, it was just a thought." 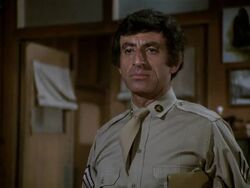 Klinger in a rare moment smartly dressed - the medical corps insignia for enlisted men is clearly seen on his left lapel. 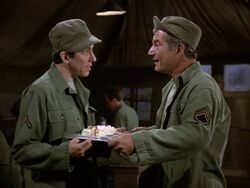 Peter Riegert (left) in one of two appearances as Igor. The other one is in "War of Nerves". 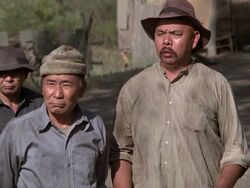 Richard Lee Sung (right) has a speaking part but is uncredited in this episode. 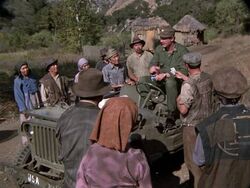 Winchester buying up the old scrip. In his left hand can be seen some blue scrip which he has just bought over. The villager next to him is holding something greenish - that's US dollars which he has just received from Winchester. 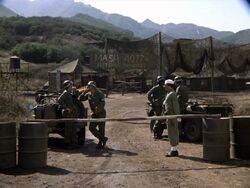 A good view of the camp gate. In the background is the motor pool and the water tower is at the extreme left. To the right, out of the camera view, is the Officers Club. Klinger is on guard, now dressed as a midshipman - he wants to try for the Naval Academy next. 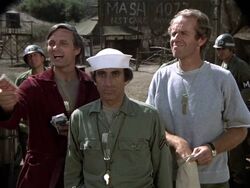