Chief Surgeon Who? is the fourth episode of Season 1 of the television series M*A*S*H. It was first broadcast on October 8, 1972 and was repeated twice, on April 15 and July 29, 1973. It was written by Larry Gelbart, who won a Writers Guild Award for it, and directed by E.W. Swackhamer. This episode marks the first appearance of Jamie Farr as Corporal Klinger.[1] In Watching M*A*S*H, Watching America, a sociological examination of M*A*S*H as an illustration of shifting American values in the 1970s and early 1980s, James H. Wittebols cites this episode as an example of the satirizing of hypocritical authority figures.[2]

After complaints about the surgeons' practical jokes during sessions, Lt. Col. Blake decides to appoint a chief surgeon. Despite protests from the Majors, he chooses Hawkeye. In retaliation, the Majors bring a General to the camp to inspect Hawkeye's work.

This episode opens with the viewer getting a chance to see what daily life is like inside the O.R. - even though Frank Burns is ranking surgeon, he's clearly out of his depth. He's snappish and rude to the others, and, even worse, he's behind in his medical information. Everyone on the medical staff seems to turn to Hawkeye for help and advice.

After a particularly nasty blow-up between Hawkeye and Frank, Henry realizes the 4077th can't keep going like this, so he has to appoint a chief surgeon.

Henry calls Frank and Hawkeye to his office. He skips over Frank and names Hawkeye as Chief Surgeon which Hawkeye reluctantly accepts. Frank is enraged and forces Henry to admit that, "when the heat's on", Hawkeye is the best surgeon in camp.

Frank and Hot Lips decide to go to General Barker, and complain about this breach of army protocol.

When Barker arrives at the 4077th, Frank and Hot Lips tell him that there's a wounded man waiting to be operated on. He storms off to go find "Chief Surgeon Pierce."

He finds Hawkweye, Trapper, Capt. Kaplan (Jack Riley), and Ugly John playing cards. He demands Hawkeye operate - now. Hawkeye refuses the order, saying medically it's not the best idea while the patient is still in shock. He's having a nurse give the patient some blood and getting him ready for surgery, and expects to operate around 3am, when he's more stable.

Barker doesn't like that answer, so he storms off to find Henry, only to find that the whole camp seems to be jumping, even this late at night: he passes a soldier hiding a woman under a poncho, Radar reading comics while drinking Henry's brandy and smoking his cigars, Spearchucker and Nurse Ginger playing "strip dominoes" (this part is usually omitted from most syndicated airings), Hot Lips sneaking Frank out of her tent, the camp's night sentry, Cpl. Klinger (Jamie Farr), patrolling the camp in a WAC uniform, and a nurse in Henry's tent while Henry is out digging worms for fishing.

Once Barker finds Henry, they meet Hawkeye and Trapper in the O.R., now that the patient is ready for surgery. Barker is impressed by Hawkeye's surgical skill, and grudgingly admits he was wrong, and Hawkeye was right. Barker tells Henry to ignore Frank from here on in, and marvels at how anything gets done in this madhouse. He is not reassured when Klinger reappears, naked, still on duty. Hawkeye, Trapper, and Henry take it all in stride.

In an end scene usually cut from syndicated airings, Trapper calls Hawkeye over for help during another busy O.R. session. As he arrives, Frank hesitantly asks Hawkeye for help with his patient. Trapper says he can manage as Hawkeye agrees to help Frank, who seems to have finally accepted the new Chief Surgeon. 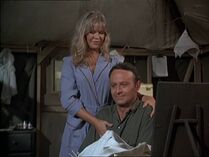 Margaret consoles Frank who is upset that Hawkeye has been appointed Chief Surgeon over him. Note her blue dressing gown with red trim. Lieutenant Carlye Breslin wears it in "The More I See You" (Season 4). 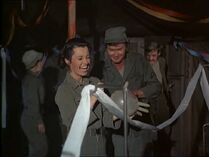 Scorch and Boone put up decorations for the Chief Surgeon's party. Ugly John has just entered the tent behind them. 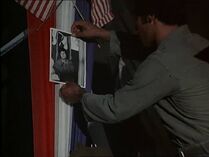 The photo of Hawkeye which Spearchucker is putting up is actually from a scene in the Pilot episode. Hawkeye is popping out of a mailbag in Lieutenant Dish's tent. Someone must have been closely following all his antics with Dish. 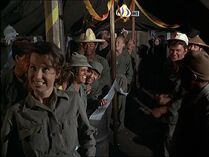 Lots of familiar faces at the party. Scorch in the foreground. Behind her is Gwen Farrell. Behind Spearchucker in the sombrero is Sheila Lauritsen. Boone is to the right in a white hat. 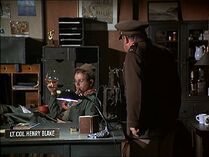 At this point they hadn't decided on Radar's final characterization. Here General Barker finds him smoking a cigar and drinking Henry's brandy. The more naive Radar will come later. 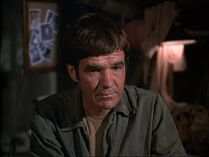 Jack Riley as Kaplan. His Captain's bars (in black) can just be seen on his right lapel. 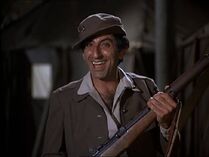 Klinger's first appearance in the entire series. A WAC uniform and a Garand rifle. See description in The Klinger Collection. 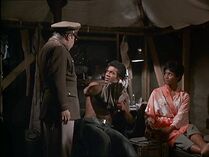 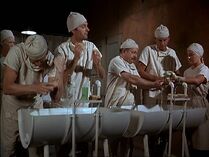 The doctors scrubbing prior to operating. The nurse to the extreme right is probably Marcia Gelman. Behind is a blonde nurse who might be Sheila Lauritsen.
Add a photo to this gallery

Retrieved from "https://mash.fandom.com/wiki/Chief_Surgeon_Who%3F_(TV_series_episode)?oldid=23276"
Community content is available under CC-BY-SA unless otherwise noted.