Visiting Divisional Chaplain who visits Mulcahy at the 4077th

Ned Beatty
Colonel Maurice Hollister is a character who appears in the Season 4 episode of  the CBS-TV series M*A*S*H titled "Dear Peggy". the part of Col. Hollister is played in the episode by Ned Beatty.

Colonel Hollister, a fellow Army chaplain who is the Far East Divisional Chaplain, and who also has a reputation as being the "Attila The Hun of Chaplains", pays a visit to the 4077th. His first impression of the moral state of the camp is not a good one as, when he arrives in camp, he witnesses members of the camp, including Hawkeye and Margaret, participate in a jeep-stuffing contest; his condemnation of "debauchery" is heightened when one of the jeep-stuffers emerges: Father Mulcahy himself! 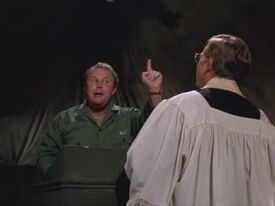 The very next morning, on even the very nervous Father Mulcahy, who is about to deliver a Sunday sermon in his presence, is inspired when Col. Hollister says "You've got to grab them!" when he demonstrates how to give an effective message.

When he delivers his message, the mess tent is packed for Father Mulcahy's service and everyone gives him exaggerated congratulations and compliments afterward to help him save face at the embarrassing scene the day before. Everyone, that is, except Frank and Margaret, who instead tell Hollister they “get chills in the presence of a real spiritual leader.” After they all leave, Hollister reprimands Mulcahy for his lack of aggression and not having the crowd in the palm of his hand.

When Hollister visits O.R., he sees a wounded soldier, Private Davis, whom B.J. began taking charge over after reviving him when Frank gave up on him, almost losing him in surgery. Father Mulcahy is put between a rock and a hard place when Davis still has not improved, but Hollister, who was staying in the VIP tent, orders Mulcahy to write an encouraging letter to the boy's parents telling them everything will be okay, before he was to do his "three push-ups and drink his milk of magnesia"!

As Hollister leaves, Davis is rushed back into surgery because it turns out that Frank never removed all the shell fragments the first time around. Hawkeye and BJ operate on Davis and he pulls through, much to the Father's relief, saving the patient as well as helping Mulcahy and the Colonel save face in the process.

Colonel Hollister is loosely based on a character from the M*A*S*H novel named "Shaking Sammy", a Protestant chaplain from a nearby engineering unit who loved shaking hands, hence his nickname.

Despite repeated warnings, "Shaking Sammy" maintained the bad habit of writing letters to parents of wounded soldiers telling them their boys were well and coming home soon, without first checking to see how badly the soldiers were wounded, or for that matter if they were even still alive. Sammy wrote and sent one such letter to a soldier's family saying that he was well and would be home soon, but the soldier died two hours after the letter was mailed. A furious Trapper John pretended to burn Sammy in effigy by tying him to a stake and throwing what looked like a Molotov Cocktail at him, but turned out to be phony. Trapper John was later reprimanded by Colonel Blake for this.

Community content is available under CC-BY-SA unless otherwise noted.