Col. Flagg is a U.S. Military Intelligence agent. His behavior is rather careless and irrational, and he appears to the staff of the 4077th to be a paranoid, overly methodical military man. At times, he deliberately injures himself - sometimes seriously - to advance a top-secret, highly classified investigation. At one point, he tried to get into CIC headquarters by crashing his jeep into a brick wall and setting himself on fire. When told of this event, Hawkeye's response was "Is this guy available for kids parties?" Another time, to get into MASH 4077, he orders a helicopter pilot to crash, and then twice breaks his own arm. He claims that he is either with the CIA, the CIC, or the CID, depending on who he's dealing with. Majors Frank Burns and Margaret Houlihan, strong anti-Communists and super-patriots, followed one of his assignments with great interest, but were unable to "buddy up" to him as they had hoped.

His dedication to duty is such that Flagg even accuses Major Burns (a known patriot) twice of being a communist agent on the "grounds" that Burns had seen a performance of the Bolshoi Ballet in Tokyo and is reading Reader's Digest, which Flagg notes is "Red's Digest" if you eliminate the 3rd, 5th, and 6th letters.

Flagg used multiple aliases, including "Captain Halloran" during Winter's initial appearance, in the episode "Deal Me Out". (Though it is never made explicitly clear if Halloran is Flagg, dialogue in a later episode referring to the poker game at the core of the episode makes it plausible that the character WInter played in "Deal Me Out" was one of Flagg's many alter egos.) Flagg's other aliases include "Major Brooks"; "Lt Carter"; "Captain Louise Klein"; "Captain Goldberg" (a Jewish chaplain with horn-rimmed glasses), and others. (One of his code names was "Queen Victoria".) At the conclusion of his second appearance (and his first under the name Flagg), a rival intelligence officer says, "Buy you a cup of coffee, Sam?", revealing his (probable) first name. However, his disguises were so obvious that people generally saw through them immediately. Once, he showed up as a Chinese double agent named Ling Chow ("The Abduction of Margaret Houlihan") dressed like Benito Mussolini. Both Potter and Radar casually greeted him by name. When pressed, Radars hasty explanation was that since Flagg looked nothing like himself, it had to be him, as only Flagg had that skill. Potter asked why Flagg was dressed like an Italian wedding usher; it was only then that Flagg claimed he was the Chinese double agent Ling Chow. When Potter remarks he doesn't look Chinese, Flagg claims that "neither would Ling Chow if he was dressed like this."

When Colonel Potter took Blake's place, Potter made a point of standing up to Flagg, telling him coldly "I'm not fond of personal abuse." Army psychiatrist, Major Sidney Freedman, also refused to cave in to Flagg's intimidation: "I'd like to help you, but with your schizophrenia, I'd have to charge you double time." Hawkeye Pierce, Trapper John McIntyre, and later B.J. Hunnicutt were high on Flagg's list of suspects (as "unpatriotic" Communist sympathizers or subversives), but always outwitted him, if Flagg wasn't busy outwitting (or harming) himself. R

Flagg's "trademark" is to assure that no one sees him leave when he finishes a job. ("I have no home. I am the wind.") Keeping up that image backfired at least once when he ordered all of the others in the room to close their eyes as he exited via a leap through the window. When the others opened their eyes after hearing a yelp of pain, Hawkeye investigated and dryly noted, "The wind just broke his leg."("The Abduction of Margaret Houlihan")

Flagg made a serious mistake when he tried to manipulate Major Winchester into spying on Hawkeye when Hawkeye put the welfare of a communist soldier over another patient, since the communist was in worse shape, which led to Flagg thinking Hawkeye was a Communist sympathizer. Winchester, who was of better character than Flagg suspected, instead duped him into thinking a camp bridge game (which included the mayor of Uijeongbu and his brother, the city's chief of police, as guest players), was a meeting of conspirators, which Flagg then attempted to raid. Even though they found out that Major Winchester set the whole thing up, the two angry Korean officials vowed to use their US military contacts to ensure that Flagg would be punished, and since Flagg was never seen again in the series, they apparently succeeded.

Flagg did appear several years after the war in a visit to General Pershing Veteran's Hospital (a guest appearance on the short-lived spinoff AfterMASH), indicating that he at least remained in the military - or possibly the CIA.

Flagg makes his first appearance at the 4077th MASH undercover as "Captain Halloran" of the Army C.I.D. in the episode "Deal Me Out". In later episodes (1972–75), he uses the name "Flagg" with the rank of Lieutenant Colonel. Afterwards, for the rest of the series (1975–83), he held the rank of Colonel. Interestingly, his rank was the same with each MASH 4077 commanding officer: Lieutenant Colonel Henry Blake & later Colonel Sherman Potter. In his first appearance, as a Captain (under an alias), Flagg has the same rank as the Officer of the Day, Captain Hawkeye Pierce. In his last appearance, he wears the DSI of the US Army Finance Corps.. Interestingly in the images displayed here, Col Flagg wears the Army Infantry Officers Brass and on other occasions wears Military Intelligence Officers Brass. Just part of the job... a job perk is is that you should always outrank those people you deal with.

As a CIA operative, Flagg may not have actual military rank. "Colonel Flagg" could be his military alias, with his rank equivalent to the highest-ranking person with whom he is expected to meet.

In one episode, Flagg remarks he has been in Intelligence for twenty years. He claims he was a showgirl at the Sands Hotel in Las Vegas for six weeks. Hawkeye claims to have seen him in that disguise during that time, saying he was wearing a big hat and carrying a parasol as well as being the only showgirl that was carrying a machine gun. 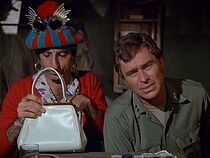 Edward Winter made his first appearance as "Captain Halloran" in "Deal Me Out" (Season 2). Here he is wearing the branch of service insignia of the Military Police Corps which is appropriate to the cover because he is an officer of the Army C.I.D. 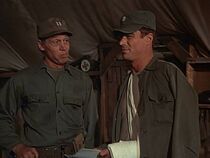 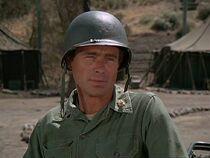 Flagg in his third appearance, in "Officer of the Day". Here he is wearing a lieutenant-colonel rank and the anachronistic modern branch of service insignia of the Military Intelligence Corps. He uses his real name. 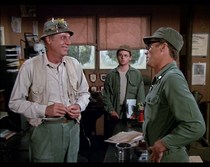 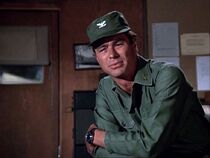 Flagg in his fifth appearance, in "Quo Vadis, Captain Chandler". He now has a Colonel's rank, to match Potter. But note the infantry branch of service insignia.

Flagg in his sixth appearance, The Abduction of Margaret Houlihan (TV series episode)

Flagg in his seventh appearance, in "Rally ‘Round the Flagg, Boys"

Flagg scares Winchester when Flagg asks if he believes that Flagg could break his leg with one finger. Flagg also terrifies O'Reilly, Blake, Burns, and Mulcahy.

When asked who he was by an MP, Hawkeye replied “[he’s] the camp self-abusement Director”

After MASH, in the premiere of a TV SCI-FI series "Misfits of Science," in a character switch, Edward Winter played an aide-de-camp who is killed trying to stop an insane General - who was played by Larry Linville.