Cowboy is the eighth episode of the M*A*S*H television series. Originally shown on November 12, 1972 and rerun May 6, 1973, it was written by Bob Klane and directed by Don Weis. It is the only first-season episode listed in TV Guide as a "classic episode".

After being denied a stateside furlough to straighten things out with his estranged wife, a disgruntled chopper pilot secretly tries to kill Henry.

Lt. John "Cowboy" Hodges, a chopper pilot whose nickname stems from his omnipresent gun holster belt and Stetson hat, lands at the 4077th with another batch of wounded, and another wound of his own, this time in his other shoulder.

In Post Op, Cowboy asks Hawkeye to check the mail as he has been expecting a letter. Seeing the concern in Cowboy's face, Hawkeye asks if there's something wrong, to which Cowboy replies, "Could be, but it ain't somethin' I can fix from here". He then asks Hawkeye if his wound is bad enough to get him sent home, even for a little while. Hawkeye says he'll see what he can do.

Meanwhile, Trapper is attempting to borrow Henry's jeep for a date with a nurse, but Frank refuses to allow it. The two are about to get into it when Henry, who is already in a bad mood, arrives and orders Trapper to find another means of transportation. Henry then goes to his office where Hawkeye is waiting to talk to him about Cowboy. He shows Cowboy's x-ray to Henry and says Cowboy should be sent home. Saying it doesn't look that serious, Henry flatly refuses, and even after Hawkeye tells him that Cowboy has a serious situation back home that needs fixed, Henry still refuses.

In the Swamp, after Hawkeye and Trapper exchange stories about Henry's bad mood, Hawkeye suggests that Henry needs to relax, so the next day, Hawkeye and Ho-Jon take Henry out for a round of golf on a course that he and Trapper mapped out on a large piece of land next to the camp. As they play the first hole (a Par 29 according to Hawkeye), Henry is just starting to unwind. He is about to take a second swing at his ball when they are fired upon from nearby. After diving for cover in nearby bushes, Hawkeye suggests it was a sniper, but Henry is not so sure as he heard the shot come from the camp. Henry gives up on the game and goes back to his tent.

But this so-called mishap turns out to be only the beginning of a chain of close calls for Henry. That night, in his tent, Henry is just getting into bed when a jeep starts up nearby and, with nobody behind the wheel, crashes through Henry's tent; Radar, Father Mulcahy and others run to pull a now-shaken Henry out of the rubble. Moments later, Henry goes to the Swamp and accuses Trapper of trying to kill him because he wouldn't let him use his jeep. Trapper strongly denies it and Hawkeye gives him an alibi saying they have both been in the Swamp all evening. Before they can stop him, a confused Henry trudges out of the Swamp to who-knows-where. Hawkeye and Trapper both agree that someone is trying to get Henry, and that they need to keep a close eye on him, so they both go searching for him. Before Hawkeye can react, the Officers' Latrine blows apart with Henry standing inside, but luckily he has survived again.

At daybreak, Henry is trying to get back to some semblance of normal, but everyone else is too scared to get near him, even Radar. Meanwhile, in Post Op, the mail is being passed out, but again no letter arrives for Cowboy. He laments to Hawkeye that he hasn't heard from his wife in a week, and begins to envision that "she's probably off with some rodeo rider". As he begins checking his gun he mentions to Hawkeye that he could shoot a rattlesnake from 50 feet away, and then cryptically remarks, "Of course, the army has its own kind of snakes, don't it?"

When Henry goes to the Mess Tent for dinner, he is soon joined by Hawkeye and Trapper who both admit they're worried about him, with Hawkeye adding that "if anything happens to you, Frank takes over". They suggest to him that the best thing he can do is to take a short leave of absence. While Hawkeye and Trapper make the arrangements, Henry briefs Frank on what to do- and what not to do. He nervously and quickly shows Frank the file drawers where the duty roster and transmitter codes are kept. Henry then tells Frank that he'll only be gone for a few days and tosses his keys into his chair, which to his horror promptly explodes.

Later, Henry, packed up and ready, is waiting by a jeep outside the Swamp for Hawkeye to return with a driver when Cowboy shows up offering to take Henry to Seoul by chopper. Trapper asks if Cowboy is all right to fly, but Cowboy dodges the question saying that he can get Henry to Seoul much faster than he could get there by jeep. Henry agrees, and the two are on their way.

It is only after Henry and Cowboy depart that Hawkeye calls Trapper to Post Op where, after smelling gun powder, he found a bag hidden underneath Cowboy's cot; the bag was filled with wiring and explosives to make assorted time bombs. Hawkeye realizes that Cowboy is the one responsible for Henry's "accidents" as his way of getting back at Henry for not letting him go home. Hawkeye says they need to find them both, but Trapper already knows where they are.

In the chopper, Henry notices that Cowboy is wearing a parachute while he is not. When he asks Cowboy about it, he only replies that he doesn't need one because it will only break his fall, and soon they start to struggle in the chopper, with Henry trying to keep Cowboy from pushing him out.

As Hawkeye and Trapper frantically try to raise Cowboy on the radio, Radar comes in with a letter that just arrived for Cowboy. When Trapper says that Cowboy's letter has arrived, he refuses to believe it and tells them to read the name and address on the envelope; the name is Mrs. Jean Hodges, his wife's name, and the address is Box 743-- in Reno, Nevada, which sends the two doctors into a panic until Cowboy confirms that Reno is his home town.

Cowboy then tells Trapper and Hawkeye to open the letter and read it to him, which Hawkeye does. Unbelievably, the letter begins "Dear John", which Cowboy says is his real name, and Hawkeye reads the letter over the radio with Cowboy listening intently:

Sometimes when you're away from someone you thought you loved, you find yourself tested by being tempted. That's what has happened to me.

Dear, dear, John, I was tempted, and I didn't want to write until I knew whether I'd passed the test.

If I say I love you more than ever, will it tell you how I did? And that I'm completely worthy of the most wonderful guy in the world?"

Redeemed and relieved, Cowboy turns the chopper around and takes Henry safely back to the 4077th.

Days later, Henry joins Hawkeye and Trapper in the Swamp and informs them that Cowboy has been shipped to Lakeland base hospital in Florida and that his wife has joined him there before he goes home for a month's leave. Henry tells them it was a classic condition of worry and combat fatigue. Trapper gives Henry a drink and asks him if he was scared up in the air with Cowboy. Henry nonchalantly replies that he can take care of himself, but when a nearby jeep loudly backfires Henry jumps, splashing his drink all over Trapper, who along with Hawkeye breaks out in laughter. 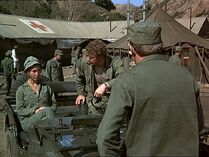 Frank trying to stop Trapper taking the jeep on a date with a nurse. Wonder who she is? Another of our unidentified extras. 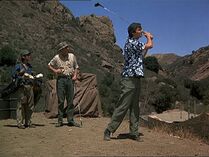 One of the best views of hole 1 of the MASH 4077 Country Club Links. From the view, it appears they are on the upper chopper pad teeing off towards the north east, meaning the ball will go over the camp compound, over the mess tent, over the Swamp and the Commander's tent towards the mine field. It is a Par 29 after all. A similar scene is in the Movie "MASH" when Doctors tee off the chopper pad. 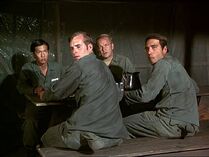 A group of extras in the mess tent about to clear out when they see Henry who seems to be attracting accidents. Ralph Grosh is second from right, seated facing the camera. 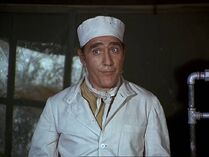 Mike Robelo as the cook.
Add a photo to this gallery

(Henry has just been shot at while playing golf)

(Henry is stunned after a jeep crashes into his tent)

(Henry is suspicious about who is trying to kill him)

(Henry in the Cowboy's helicopter)

Retrieved from "https://mash.fandom.com/wiki/Cowboy_(TV_series_episode)?oldid=23714"
Community content is available under CC-BY-SA unless otherwise noted.