Dear Comrade was the 12th episode of Season 7  of the M*A*S*H TV series, also the 159th overall series episode. The episode, which was written by Tom Reeder, was directed by Charles S. Dubin. The episode originally aired on CBS-TV on November 27, 1978.

A North Korean Spy infiltrates the 4077th and poses as Charles' houseboy, in order to observe and report on 4077th's efficiency and success to his superiors.

Hawkeye and B.J. return to the 4077th after some days of R&R in Tokyo and present Winchester with a gift that they say he definitely needs: a Samurai wig. But Winchester has the last laugh on them when they find the Swamp not the same as it used to be: it is clean and tidy! Winchester introduces them to Kwang (Sab Shimono), a Korean man whom Winchester has hired as a houseboy at the salary of $1.00 an hour..but who only works for 1 hour a day!

Wounded arrive and the doctors rush off. We then learn, from Kwang's voiceover, that he is not what he seems: he is actually a Korean spy. He narrates a report to his intelligence chief, saying that he has secured a post as a "a grinning lackey" to "an American capitalist fool" - namely, Winchester - and hopes to observe the secret of the 4077th's efficiency and success at treating wounded soldiers.

At first, Kwang is shocked and dismissive about the 4077th. He says the OR is chaotic, and their behavior off-hours (which includes drinking and gambling) is "decadent." They are "soft and weak-willed", supplied with a lot of food but constantly whining about the quality of it.

Meanwhile, the doctors are stumped by a rash that has infected several wounded soldiers. Nothing they try seems to work. They call a dermatologist but he is more concerned about his golf and doesn't want to be kept off the dance floor and doesn't give the MASH any useful advice. The rash gets worse and the patients are scratching so severely they are tearing their stitches.

Kwang marvels that the American doctors, with all their advanced training and medications, cannot figure out how to treat a simple rash. So Kwang offers his own remedy - a concoction of boiled tree bark which stinks to high heaven. The doctors are none too keen because of the stench, but Post Op is not short of volunteers for a trial, and the remedy works.

Later that night, Kwang completes his report to his superiors and prepares to leave. He concludes that the success of the 4077th is valid but their methods are so unorthodox that the North Korean hospitals would find it impossible to duplicate. The idea to abduct Winchester for information is not practical either - he is too much trouble to be worth the effort.

As he's leaving, he's stopped by Hawkeye, B.J., and Potter who thank him for the remedy and present him with an official commendation from the U.S. Army for his contribution. They invite him to the Officers Club for a drink.

Kwang is touched, and lies to his commanders, saying he needs to stick around and observe the 4077th some more - in reality, getting drunk with all of them in the Officers Club. Hawkeye, B.J., and Potter notice that Kwang's English has mysteriously improved over the course of the night, which he chalks up to the whiskey.

A second plot line is about Hawkeye winning a jeep at poker - except that the loser, a supply Sergeant named Cimoli, doesn't deliver a jeep but a 75mm howitzer instead. Potter wants Hawkeye to get rid of the gun but it proves more difficult than it seems. 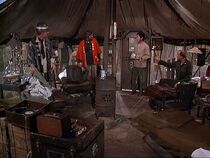 Winchester introduces Hawkeye and B.J. to Kwang. Note there are two phonographs in the Swamp! One is next to Winchester (he has just been listening to it). The other one is in the foreground. 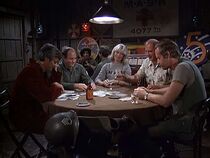 Poker game with Sergeant Cimoli. His helmet is in the foreground. The nurse in the distant background might be Nurse Shari but cannot be sure. 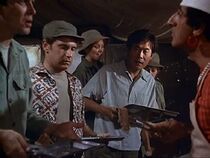 Scene in the mess tent. The tall red head nurse in the background is almost certainly Mary Peters as Lieutenant Peters. 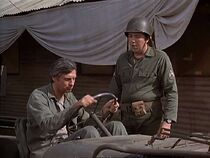 David Dozer always seems to land delivery/despatch roles. Here he is delivering a howitzer to Hawkeye. 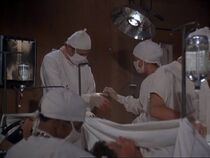 Laurie Bates has appeared uncredited several times already. Here is her first credited and speaking part. She is passing Winchester a hemostat and advising him they are running short. 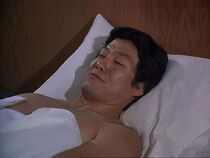 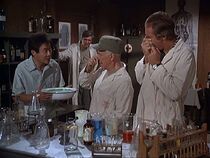 A good view of the lab. Kwang is presenting his answer to the skin rash problem. 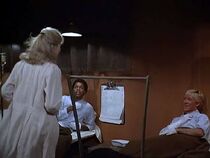 Welch on the right, Latimer on the left. Welch is telling Margaret that Kwang's tree-bark brew works and he wants more.
Add a photo to this gallery

Retrieved from "https://mash.fandom.com/wiki/Dear_Comrade_(TV_series_episode)?oldid=21533"
Community content is available under CC-BY-SA unless otherwise noted.