Deluge was the 96th episode of the CBS-TV series M*A*S*H, and, also the 24th episode of the fourth season of the series. Written by series co-creators Larry Gelbart and Simon Muntner, and directed by William Jurgensen, it first aired on February 17, 1976.

The Chinese Army joins the war, killing any hopes the 4077th has about a speedy resolution and homecoming.

A massive deluge of wounded hits the 4077th, and all the various cases are intercut with actual black and white Newsreel footage from the time - some of it important and newsworthy, some of it silly, like a ping pong-playing cat.

In addition to the casualties, landmines start to explode, set off by the extreme weather changes outside. News breaks that China has ruptured the U.N.'s front line, kicking off "an entirely new war."

The news gets so bad that orders are sent for all the nurses to be shipped out temporarily. But Margaret refuses to leave, even in the face of great danger. She feels so strongly she walks in in the middle of Col. Potter taking a shower, demanding she stay: "I was born to serve, Colonel, you must let me!" Potter reluctantly agrees.

Tensions start to flare, with Frank prattling on about how he's happy the Chinese have entered the war, and now the U.S. can "obliterate them all."

The intense load of casualties pushes the 4077th's supplies to absolute limits, forcing the doctors to operate bare-handed when they run out of rubber gloves and even resorting to Klinger's sewing kit after using up all other suture materials.

To make things worse, a carelessly-tossed cigarette starts a fire in Pre-Op, which Radar and Klinger struggle to put out. They finally do, arriving in O.R. just in time for a bomb to go off just outside, blowing out the O.R.'s windows and causing all sorts of chaos.

Eventually, the deluge subsides, leaving everyone exhausted. Potter walks in on Margaret as she is showering (leaving a bewildered Frank waiting outside), thanking her for staying. 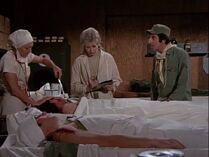 Pre-op scene during the deluge of wounded. Looks like Lieutenant Jo Ann on the left. 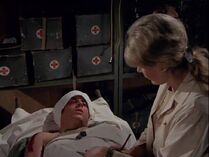 Tom Ruben (billed as PFC) tells Margaret he already handed his belongings to someone outside. Margaret tells him he has been robbed. 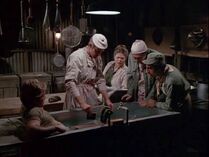 A rare view of the kitchen area and the kitchen sink. B.J. and Hawkeye treats phosphorus burns with copper sulfate. Looking on with Klinger is Lois Foraker as Nurse Able. 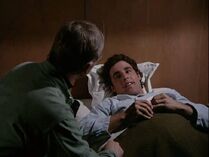 Kario Salem as a soldier (billed as "Youngster") with Father Mulcahy. 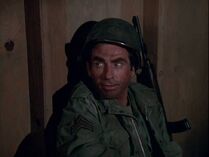 Anothony Palmer as a sergeant waiting for his buddy in the rest area outside of the O.R. His cigarette later sets fire to the laundry bin. 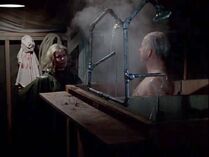 One of Loretta Swit's favorite scenes. She barges into the shower tent and demands that Potter allow her and her nurses to stay at their posts instead of being evacuated. "Colonel Potter, I want to see you!" "One step closer, and you'll get the whole picture," he replies. 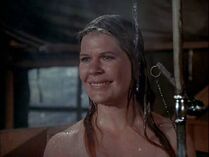 After the deluge, Potter returns the compliment and thanks Margaret in the shower for staying on, thus getting from her what is probably her widest smile in the whole series.
Add a photo to this gallery

Retrieved from "https://mash.fandom.com/wiki/Deluge_(TV_series_episode)?oldid=24485"
Community content is available under CC-BY-SA unless otherwise noted.