Exorcism is the 110th episode of M*A*S*H, the 13th in the fifth season of the show, which originally aired on CBS-TV on December 14, 1976. It was directed by Alan Alda, and written by Jay Folb from a story by Gene Reynolds and Folb.

Against Frank's objections, Colonel Potter allows an Korean exorcism ceremony to be performed for a local civilian who rejects an operation because of the bad spirits that surround the 4077th.

A Korean peddler pushing an overloaded cart full of knick-knacks set up shop on the compound. Col. Potter asks the man to leave (giving him an hour to have a "going out of business" sale), because he's blocking traffic.

He also asks Radar to move a "spirit post" that some of the locals set up, to ward away evil spirits. Potter, not believing in any of that stuff, asks Radar to move it out of the way. Radar tries to talk him out of it at first, but Potter insists.

No sooner does he move it, then a young Korean man riding a bike loses control and crashes into the peddler's cart. Then more unusual phenomena take place: a gauge breaks in the middle of an operation, the P.A. conks out, Col. Potter stabs himself with his scalpel, a lighter he bought that worked earlier stops working, light bulbs blow out all over camp, and Hawkeye accidentally breaks Frank's mirror, cracking the glass in two. Margaret points out that the date is Friday the 13th, but Potter dismisses it as superstitious hogwash.

Hoping to change their luck, Radar puts up a horseshoe on Col. Potter's office wall. Potter still scoffs at the idea, but likes the horseshoe as a simple ornament. Potter has a change of heart about his stance on lucky superstition and asks Radar to point the heels up "So the luck don't run out", which Radar obliges.

Later, an ambulance carrying some of the 4077th's patients home crashes, and they are all brought back to camp. One of the other wounded is a very old Korean man, who jumped in front of the ambulance because he was trying to frighten off evil spirits. He doesn't want to be operated on at the camp because of supposed evil spirits haunting the place. He's so scared he won't let Hawkeye touch him, even though it means he'll probably die because of his injuries.

His granddaughter, who followed her grandfather to the 4077th, says there is a village priestess who can perform an exorcism, which would put the old man at ease. After a debate about it in Col. Potter's office (with Frank against it, of course), they bring the priestess to the camp, where she performs an intricate, colorful, and (to the members of the 4077th) baffling ceremony.

The old man, now relieved, allows Hawkeye to perform the operation. All of a sudden, the P.A. starts working again, Potter's lighter works, and the gauge that was broken earlier is now fixed. Hmm...

Later, as a way to say thank you, the old man's granddaughter gives Hawkeye a metal wind-chime: "Not for scaring away evil spirits - for decoration."

Col. Potter, just to be safe, has Radar put the spirit post back where it was. Radar, as always, is ahead of him and has restored the post already.

At the end, Hawkeye and B.J. pull a trick on Frank by unplugging his radio and leading him to believe that the "evil spirits" are back. Hawkeye performs a faux exorcism using the wind chime and the radio mysteriously comes back on...thanks to B.J. secretly plugging it back in. 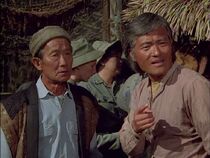 The peddlar on the left is addressed as Mr Yee. Both he and the interpreter (Johnny Yune) have many lines but both are not credited. Kellye is in the background and so is an unidentified nurse extra who looks familiar. 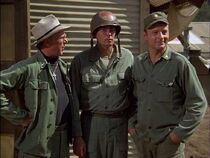 The medic in the center arrives with Kyong Ja and the grandfather. He has a few lines, telling Hawkeye what happened but he is uncredited. 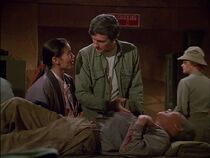 Kyong Ja and Hawkeye in preop with her grandfather. In the background, Jennifer Davis is passing. 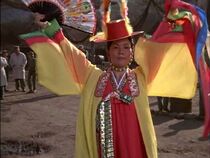 The exorcist gets a lot of screentime and her dance is the highlight of the episode but she is not credited. 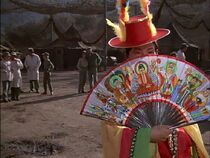 Detail of the exorcist's fan. It appears to depict a number of Korean deities. 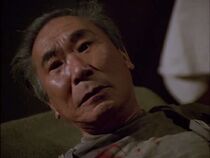 Philip Ahn as the grandfather who insists on the exorcism procedure before being operated on. 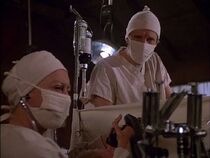 This anesthetist has a few lines early in the episode when she tells Hawkeye the blood pressure gauge is stuck. She is not credited. This really needs someone good at spotting eyebrows to identify her. 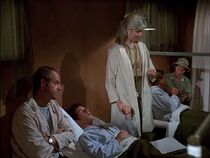 B.J., Margaret with Corporal Marsh (James Canning) who is at the MASH for the third time. The purpose of this shot is also to capture the nurse extra in the background. She wears glasses and looks familiar but is so far unidentified.