Fade Out, Fade In, Part 1 (also called "Fade In, Fade Out") was the 123rd episode and the premiere episode of Season 6 of the M*A*S*H TV series.

This episode, which was part one of an hour-long two-part episode arc, is most notable for its off-screen departure of Frank Burns and the arrival of a new surgeon, snooty Boston blueblood Major Charles Emerson Winchester III, played by David Ogden Stiers. The episode was written by Everett Greenbaum and Jim Fritzell and directed by Hy Averback. It originally aired on September 20, 1977.

With Frank late in getting back from R&R in Seoul, Potter sends for a temporary replacement, in the person of one Major Charles Emerson Winchester III...

With Frank despondent over Margaret's marriage, Hawkeye, B.J. and Potter arrange for him to take some needed R&R in Seoul, but he uncharacteristically fails to report back to camp on time. Radar is concerned, but Potter initially is not. Wounded arrive, and with both Frank and Margaret absent, the 4077th is very short-handed. One of the wounded is a doctor himself, Dr. Berman (Raymond Singer), whose chest wound is so severe that even Hawkeye isn't sure he'll be able to patch him up.

During surgery, when Potter complains aloud about Burns' absence, B.J. speculates that Frank went all the way to Tokyo to crash Margaret's honeymoon. Shortly after surgery, a very sullen Margaret reports back to camp earlier than expected, and quietly and promptly goes back on duty.

Meanwhile, Potter gets two calls from the MPs in Seoul, who say that a Major Burns has accosted both a blonde WAC and a blonde Red Cross woman, but escaped before the MPs could catch him. Potter thinks Frank is heading for a Section Eight, and makes some calls to get a replacement surgeon. He gets through to a Lt. Colonel Baldwin at Tokyo General Hospital as he is playing cribbage with a Major Charles Emerson Winchester, a smug and arrogant doctor. When he loudly points out to Baldwin that he has beaten him in cribbage to the tune of nearly $700, Baldwin decides he has the perfect candidate for temporary duty at the 4077th, and sends Charles packing. En route, he and his driver are fired upon and have to take cover. Their jeep is then hit and destroyed, and after the driver points the direction Charles needs to travel, he heads back to his own unit leaving Charles stranded.

Charles finally arrives at the camp in the back of an ox-cart. Radar is the first person to welcome him, but as he is wearing his dress uniform and carrying all manner of personal items, his general feeling of superiority over Radar is obvious. He is then introduced to Potter, Hawkeye, and B.J. as they are having a drink, and his aloof demeanor quickly grates on everyone, insisting on calling everyone "Doctor" even after they introduced themselves by their nicknames. He then states he doesn't plan to "stick around long enough to get chummy."

When word arrives that Dr. Berman has gone into heart failure due to a ventricular aneurysm, everyone rushes out. Charles wonders what the "panic" is about, and then states that he's performed the necessary procedure successfully over a dozen times. He performs the surgery, and it goes off without a hitch, except that Charles is very self-congratulatory. Margaret is impressed, but Hawkeye and B.J. are less than thrilled.

Potter gets another call about Frank, and then tells Radar, Hawkeye and B.J. the latest: Frank was finally arrested after drunkenly accosting another woman and her companion in a public bath, only this time it was Brigadier General Kester and his wife, and Burns was taken into custody for psychiatric observation. And then Potter drops the big news: Frank is being transferred out of the 4077th... permanently! Hawkeye and B.J. toggle back and forth between delight that Frank is gone for good, and outrage that they're losing their favorite punching bag; as B.J. points out, "This reduces the enemy to just North Korea!"

Potter invites Radar to join them in drinking a toast to the now-departed Frank; they agree that the toast must be something tender and sensitive, and Hawkeye comes up with one:

After sharing the drink, Hawkeye, B.J. and Radar (and eventually Potter himself) wildly throw piles of paper from Potter's desk into the air in celebration.

Still in a bind because of Frank's now-permanent departure, Potter again calls Colonel Baldwin to make Charles' temporary assignment to the 4077th permanent...

While tending to patients in post-op, Klinger has a chance meeting with a patient named Schaeffer, who asks him about his cross-dressing. When Klinger mentions he has been wearing women's clothing in the army for two years, Schaeffer informs him that he is a Captain and a lawyer from the Adjutant General's. Schaeffer further advises him that he should legitimately qualify for a Section Eight discharge. Later, he and Klinger meet with Potter, and Schaeffer informs him that he will convene a hearing as Klinger's attorney. 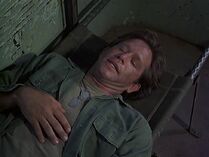 Tom Stovall plays a sergeant who doesn't want to go back to the front because he is sick of killing. He has several scenes and many lines but somehow didn't merit a named character. 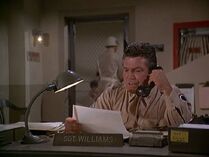 William Flatley as the M.P. Sergeant who tells Potter about Frank's exploits in Seoul. The enlisted man's M.P. branch of service insignia is just visible on his left lapel. The name board indicates he is Sergeant Williams. 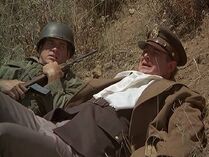 James Lough a.k.a. James Carroll as Winchester's driver. He appears 7 times in M*A*S*H, mostly as various G.I.s. He has a named character, PFC Felix Kornhaus in Season 5 "End Run".