Follies of the Living-Concerns of the Dead (TV series episode)

Follies of the Living-Concerns of the Dead was the 10th episode of Season 10 of the CBS-TV series M*A*S*H, also the 229th overall series episode. Written and directed by Alan Alda, it originally aired on January 4, 1982.

While Klinger is deliriously ill, he is able to communicate with the spirit of a dead soldier.

Klinger comes down with a kidney condition resulting in a high fever and fits of delirium. All the doctors are discussing what caused Klinger to become infected when a new batch of wounded arrive, one of which, a Private Jimmy Weston, is DOA, so his body is put off to the side while the camp tends to the others. Right after Weston is laid down, Father Mulcahy comes to give him last rites, at which point Weston's spirit rises out of his lifeless body. He futilely tries to get Mulcahy's attention, and then turns to Klinger asking him to do something. But Klinger, who in his delirium can actually see and hear Weston, can only say, "What can I do? Dead is dead, right?"

Weston cannot yet accept he's dead and wanders through the camp observing everyone else as they deal with their own petty problems as they prepare for surgery: Hawkeye and Charles argue over which nail each of them gets to hang their clothes on in the Scrub Room, and B.J. and Margaret squabble over which fork B.J. likes to use in the Mess Tent. Weston tries talking to each of them, but none of them can hear him. Weston goes into the OR and sees his pal, Private Franklin Hicks, being operated on by Hawkeye, Charles, and eventually Potter. Later, he watches as B.J. and Father Mulcahy go through his personal effects, including his calfskin wallet, a picture of his girlfriend, and his high school ring. They pack his belongings in a box, and Weston begins to realize that he is indeed dead.

In Post Op, Hicks asks about Weston, but through Mulcahy, Potter sadly informs him that he didn't make it. Hicks is shocked and saddened, and then talks about what a good friend Weston was, comparing him to the losers he has met, including one guy who stole a watch off a dead man. To Weston's frustration, Hicks sees no point to going on if people like Weston are killed. Mulcahy quotes Job's question to God about evil people flourishing while the good are allowed to die; he points out to Hicks that bitterness is not the answer.

Weston is pained by Hicks' lamenting and brings it up to Klinger, who can still see and hear him; Klinger tells him, "Well, look, what do you expect? How would you feel if you lost your best friend?" He is shushed by Potter, and then Mulcahy gives Hicks something to think about before letting him rest: "Would Weston have given up if you had died?"

Meanwhile, all the doctors are still arguing amongst themselves about how to treat Klinger's illness, ignoring Margaret's suggestion that they should work on getting his temperature down above all else. Eventually Margaret gets her point across and, with help from Kellye, gets some good results using numerous ice packs to break the fever.

Later that night, Hicks is inspired to write to Weston's parents about his death and his own remembrance of him; he dictates the letter to Potter who reads it back to him (with Weston listening):

"I'm Franklin Hicks that Jimmy has written you about. I feel I know you from Jimmy's description of you, so that's why I'm writing you this letter, although I wish I didn't have to.

"Yesterday, Jimmy and I were both wounded very badly. The medics got there right away, and they did everything they could for Jimmy, but I'm sorry, Mr. and Mrs. Weston, they just couldn't save him. But I want you to know it was very sudden, and he felt no pain.

"It's very difficult to write you about this, but I had to because of how much Jimmy loved you, and how much I loved Jimmy. He used to read the comic page to me and make up funny voices for all the characters. After a while it would have us both in stitches, and then when we'd be on patrol and he'd see I was getting scared, he'd start talking in one of those voices and it would really lift our spirits. I think that's one of the greatest gifts anyone could have.

"I know how terrible this must be for you, but I want you to know that you have my deepest sympathies. Yours very sincerely, Franklin Hicks."

In the pre-dawn hours, Hawkeye, B.J. and Charles are in the Swamp bingeing on gin from the still, drinking random toasts to anything and everything they can think of. As Weston sits there watching them, he begins to feel something is happening to him and says that they're beginning to look funny, "like you're all made up of little dots". As the surgeons continue drinking their toasts, Weston feels as though he has to go someplace, but doesn't know where. He begins walking across the compound, oblivious to brief bits of conversation, some silly, some serious, from others in the camp. Weston finds himself standing on an unfamiliar dirt road when another dead soldier calls out to him and tells him that they have to walk down the road to wherever it is they're going. The two walk alongside one another as other newly-dead soldiers from both sides of the war begin walking the same road.

The next day in Post Op, Klinger wakes up, his fever having broken, and Margaret, Hawkeye and B.J. are all happy to see him back to normal. Klinger asks about Weston, but none of them know who he's talking about. As the three of them argue over who has Post Op duty next, Klinger quietly lays back in the bed, pondering what happened-- or perhaps whether or not it happened at all... 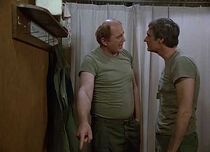 Winchester and Hawkeye argue over which clothes hook to use. 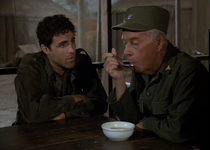 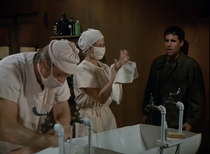 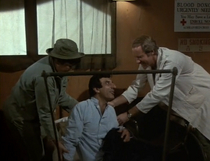 Nurse Kelly in one of her many uncredited appearances. 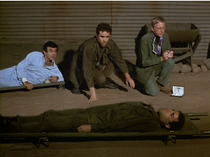 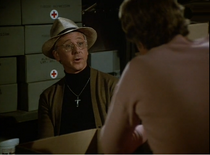 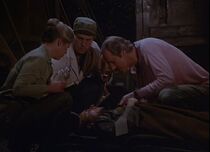 B. J. tries to save Pvt Weston. Looks like Jo Ann Thompson on the left. 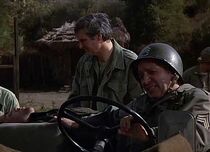 Perren Page in one of his many appearances as a driver. 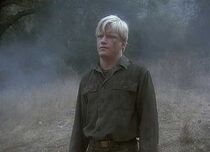 Jeff Tyler as the unnamed soldier who shows Weston the way down the road.
Community content is available under CC-BY-SA unless otherwise noted.
Advertisement