Hawkeye Get Your Gun

Hawkeye Get Your Gun

Hawkeye Get Your Gun is the 108th episode of M*A*S*H, the ninth in the fifth season of the show, which originally aired on CBS-TV on November 30, 1976. It was directed by William Jurgensen, and written by Gene Reynolds and Jay Folb.

Hawkeye and Potter provide assistance at a Korean clinic, encountering enemy fire almost every step of the way. Meanwhile, Klinger begins posing as a Gypsy to help get his discharge papers.

During a long session in OR, Frank keeps making less-than-subtle comments about Potter's age, and how he might not be as capable as his three younger surgeons. Potter is, of course, insulted. Later on, the 4077th gets a message from a Korean hospital, asking for help - two doctors, and all the medical supplies a jeep can carry. While trying to decide who will go, Frank puts his foot in his mouth again, suggesting that Potter is too old to go on this mission. Potter uses a deck of cards to decide who's going to go - and it ends up being Hawkeye and Potter.

As they climb into the jeep, Potter notices that Hawkeye is unarmed. Citing that carrying a weapon will only invite unwanted trouble, Hawkeye doesn't want to bring his sidearm, but Potter orders him to get it, which B.J. does. Soon, they arrive at the Korean hospital, which turns out to be a dilapidated hut. The commander, Major Choi (Mako), greets them, and immediately puts them to work. Hawkeye is dismayed (and more than a little snide) at the lack of sterile conditions, but Major Choi reminds him they are making do with what they have.

It turns out to be a marathon session, with the unwanted addition of enemy shellfire going on nearby. Eventually, Hawkeye and Potter try to catch some sleep in a side room, resting on a wooden crate. Hawkeye boasts he can put Potter to sleep, and tries to pseudo-hypnotize him into doing so. It works, but in reverse, as Hawkeye puts himself to sleep, leaving Potter to go back to work.

By daybreak, the deluge and enemy barrage are over, Major Choi commends them on their work, and they head home. On the way back, Potter finds that Klinger had packed a canteen full of booze in their knapsack, and the two drink liberally as they drive along. They both get hammered and silly, but things quickly get serious when the two are again fired upon by enemy shellfire which gets so close that they pull over and dive into a nearby foxhole, after which the jeep is shelled and destroyed, and then bullets start to fly.

Refusing to be "dragged off to some Chinese prison camp", Potter empties his gun returning fire. He insists Hawkeye do the same, but he adamantly refuses, even after Potter makes it a direct order. He lets Potter know that as a doctor it is not his place to cause wounds, but to treat and heal them. But when Potter persuades him to think of the gun as "The loudest cap pistol in Korea" and to "just shoot it and scare the living hell out of them", Hawkeye decides he can do that, and empties his gun firing straight up into the air, warning everyone within earshot to take cover; his actions earn the observation from Potter that "you're a crazier soldier than a surgeon". They both end up giggling in the ditch, just as the bullets stop flying. They then crawl out of the foxhole and encounter a platoon of U.S. soldiers on patrol who inform them that the NK have pulled out and the area is now secure, so Hawkeye and Potter drunkenly stagger their way back to camp. 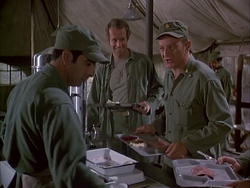 Carmine Scelza has a credit as "G.I". This is probably him, serving lunch to Burns who is not happy that there is no more rhubarb. 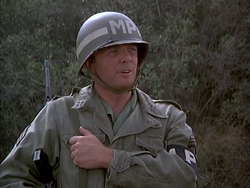 Richard Doyle as the M.P. He has a partner in the jeep who is not credited. 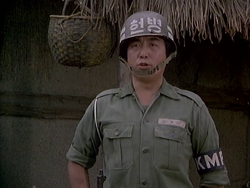 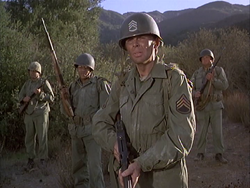 Thomas Botosan as the Sergeant. He is leading a patrol finds discovers Potter and Hawkeye after their jeep has been blown up 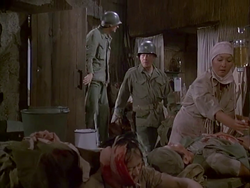 There are a number of Korean nurses in the episode. None have speaking parts and none are credited.

One of Potter's paintings is crafted, Hawkeye with his feet on desk. The finished version first appears in Exorcism.