Henry Please Come Home was the 9th episode of Season 1 of the TV series M*A*S*H, also the 9th overall in the series. Written by Laurence Marks and directed by William Wiard, it originally aired on November 19, 1972. Although it was 9th in broadcast order, this episode was actually the 2nd to be produced.

Henry receives a citation for the camp achieving the best efficiency rating, and then General Hammond reassigns him to Tokyo. Frank then changes the 4077th to make it more military and becomes a tyrant. But then he goes further and confiscates Hawkeye's and Trapper's still. The two then use forged passes to go to Tokyo to convince Henry to come back. They succeed by having Radar pretend he is sick.

In the O.R. Frank has an argument with Ginger Bayliss again (like the one he had in the "Pilot episode"). This time it is over the type of suture to use.

Coming out of the O.R., Frank tells Henry he wants to file insubordination charges against Ginger. The other doctors protest but before the discussion gets any further, Radar comes with news that General Hammond has awarded the 4077th a special citation for achieving a 90% efficiency rating, the highest by any medical unit in Korea.

Hammond visits the camp to present the award to Henry and then shocks everyone by announcing that Henry is being transferred to Tokyo for training and administrative duties.

Frank takes over as commander and becomes a tyrant. He institutes unnecessary military routines like early reveille and early morning calisthenics. The other doctors go along half-heartedly but then Frank goes too far and confiscates the still in the Swamp.

Hawkeye, Trapper and a few others gather in the mess tent to discuss what to do with Frank. Hawkeye concludes that the only solution is to bring Henry back, using his ego to entice him. The resourceful Radar goes through his stack and produces two passes to Tokyo that he has somehow "obtained".

Hawkeye and Trapper find Henry in Tokyo but he is enjoying himself too much to want to go back to the 4077th. Even mention of Scorch being "a basket case' doesn't move him. But then, according to plan, Radar puts through a call about himself being seriously sick with something which Hawkeye describes as a "tough case", "a diagnostic problem."

Henry decides to rush back to the 4077th but then stuns everyone by wanting to do exploratory surgery on Radar! Frank resists this, and even Hawkeye and Trapper agree with Frank. However Henry insists and wants to put through a call to General Hammond to override Frank. Radar gets up a little too eagerly to put the call through, thereby blowing the cover.

Henry demands to know what is going on. Hawkeye explains that they just wanted him back and Radar's fake illness was designed to make him feel wanted. Frank wants to call the M.P.s to arrest Hawkeye and Trapper but Henry stops him - he has decided to take over! 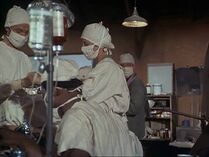 This nurse has a couple of lines like "clamp", "rib cutter". Could be the Jean Pleet who is credited as "nurse". 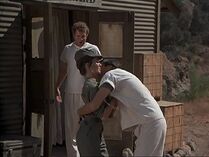 Hawkeye grabs this nurse coming out of the O.R. She is busy extricating herself. Could she be Jean Pleet? 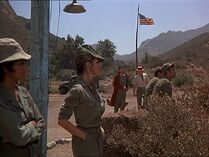 A better view of this second unknown nurse. She is listening to General Hammond announce Henry's commendation award. Could she also be the leading nurse in the running nurses scene in the opening sequence? 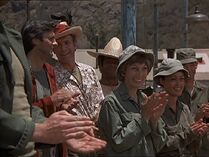 Hawkeye, Trapper and Spearchucker at the award ceremony. Those two nurses look familiar but can't tell who they are. 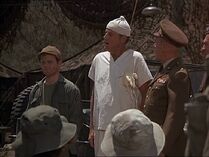 Bill Svanoe is credited as an aide. To the extreme right, there is an aide standing next to Hammond. His nose and eyes can just be seen. Generals have aides, so this is plausible. 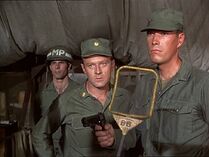 Ho-Jon has just announced that Frank Burns is inspecting the swamp with an M.P. and an aide. The M.P. is not credited but the aide could be Bill Svanoe. Of course, Burns isn't entitled to an aide but that wouldn't stop him appointing one. 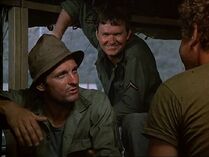 Bob Gooden's second of three appearances as Boone. He has a line or two here. 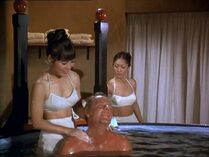 Kasuko Sakuro as Cho-Cho giving Henry a reason why Tokyo is preferred to the 4077th MASH. 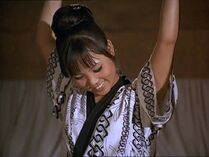 ....and a second reason. Here she is giving Henry a foot massage. 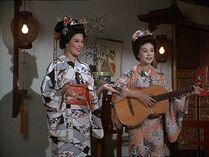 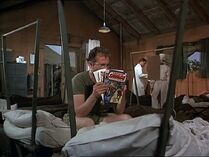 Radar with the anachronistic Captain Savage. See Anachronisms in M*A*S*H. 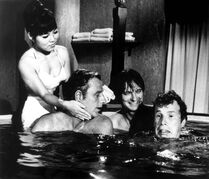 Behind the scenes
Add a photo to this gallery
Retrieved from "https://mash.fandom.com/wiki/Henry_Please_Come_Home_(TV_series_episode)?oldid=23287"
Community content is available under CC-BY-SA unless otherwise noted.