Henry in Love was the 16th episode of Season 2 of the TV series M*A*S*H, also the 40h overall episode of the series. Written by Larry Gelbart and Laurence Marks and directed by Don Weis, It originally aired on CBS-TV on January 5, 1974.

Devoted family man Henry takes some leave in Tokyo and returns head over heels in love with a woman half his age.

Frank is enjoying his week of command while Henry is away in Tokyo, except for the occasional nasty note left for him in the suggestions box. Henry extends his trip by two days and we soon learn why: Henry is in love. Not just love, but “head-over-heels, puppy-dog-in-love.”

Henry met a girl named Nancy Sue Parker in Tokyo, and he shows her picture to Hawkeye and Trapper. Hawkeye is impressed with the young girl, but asks, “You’re in love with her mother?” It turns out Nancy is 20 years old, and Henry has not decided what to do about Lorraine, his wife and mother of his three children. The captains think he is just having a fling and the crush will pass, but get concerned Henry may do something foolish. They are less than excited that Henry's fling is coming to visit the 4077th for the weekend.

Henry preps for his weekend by darkening his gray hairs (much to Radar's shock) and requesting a “You Make Me Feel So Young” record put in the Officers’ Club jukebox. Radar tries to present a letter from home to Henry, even offering to transcribe a reply, but Henry dismisses him.

Henry's prep continues: he starts jogging and doing pushups to get in better shape, but only wears himself out and gets a case of “bleeding hair.” Finally, Miss Nancy Sue Parker arrives and looks even better than described. Radar, clearly miffed with his boss, delays decorating the VIP tent and brings up Henry's letters from home in front of Nancy Sue. Impressed at the camp, she finds Radar “adorable”.

That evening, Henry takes Nancy Sue to the Officers’ Club, where the majors get their first look at Henry and his paramour. They disapprove, finding the relationship “immoral” and “disgusting”, with Frank having the audacity to sneer at a married man fooling around with another woman much to Margret's displeasure.

Nancy Sue hears “Buckle Down Winsocki” on the jukebox and she says it reminds her of her cheerleading days at Ohio State. Hawkeye eggs her on and asks her to do a cheer, much to Henry's embarrassment. Nancy Sue complies and puts on a cheer routine right in the middle of the club, complete with flips and splits and makes Henry beam like a proud father, as Hawkeye points out.

Henry and Trapper get called away for surgery, so Hawkeye ends up escorting Miss Parker back to her tent. Once inside, Nancy Sue plants a “goodnight tonsillectomy” on Hawkeye, who is taken aback by it and quickly leaves, running into Trapper and telling him what just happened. Trapper replies Radar just arranged a telephone call for Henry to his wife, so they rush to Henry's office.

Henry is speaking to Lorraine about her overdrawn checkbook and to his son about being the man of the house while he is serving in Korea. Henry informs the captains the girl who really is “the one” is $68 overdrawn on her checking account. Relieved, the captains retire for the night, Nancy Sue's duplicity unmentioned. Henry thanks Radar for placing the call to Lorraine, stating she was grateful and wishes he had made the call himself. Henry then is glad to see Nancy Sue off the next morning and relieved he did nothing further to jeopardize his marriage. 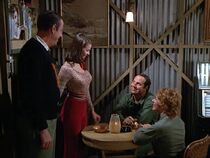 Fleeting view of Henry introducing Nancy Sue Parker to some people in the Officers Club. Looks very much like Patricia Stevens seated, back to camera. She first appeared in "The Incubator", two episodes ago.
Community content is available under CC-BY-SA unless otherwise noted.
Advertisement