Identity Crisis was the third episode of Season 10 of the CBS-TV series M*A*S*H, coming immediately after the 2-episode length season opener. It was also the 221st episode out of 256 in the series. Like a few other episodes in Season 10, this episode was produced during Season 9 but held over for broadcast in Season 10. It therefore carried a Season 9 production code in the Z-series. Written by Dan Wilcox and Thad Mumford, the episode was the first to be directed by David Ogden Stiers and first aired on November 2, 1981.

Father Mulcahy counsels a GI who is plagued by guilt because he has swapped tags with a dead colleague. Meanwhile, B.J. and Charles consider ways of keeping a soldier-salesman quiet.

Wounded arrive, including one soldier named Levin (Joe Pantoliano) who is having a bad reaction to the transfusion he got at Battalion Aid. B.J. determines he received the wrong blood type, and that his dog tag is mistaken.

After Levin has had the chance to recover, B.J. tells Margaret that they need to tell I-Corps that Mullen's dog tag needs to be changed. He interjects, saying that's not necessary, since he is scheduled to go home in just a few days.

Another soldier, James Mathes, is treated by Margaret and Hawkeye for minor wounds when he asks them to add more bandages to cover up the tattoo on his arm. The soldier explains that he received a "Dear John" letter from the woman his tattoo is based on, saying she has become involved with a wealthy prominent businessman and as a result she wants her photo back; she plans to pretend her relationship with the soldier never existed. Margaret is disgusted by this bit of "social climbing" and tries to assure the wounded man that he is better off without her. The soldier is less than assured, so Hawkeye develops another plan.

Father Mulcahy visits Mullen to offer religious services, but Levin seems nervous and disinterested. He says he's Jewish, but seems uncertain about it. Later, Klinger tells him that the 4077 laundry can't find his uniform, but Levin says the one left over - with another soldier's laundry mark on it - is his.

In the middle of the night, Nurse Kellye gets Mulcahy, saying that Levin wants to speak to him. Levin asks Mulcahy to hear his confession, which he agrees to. But Mulcahy is startled when Mullen begins the normal Catholic ritual of confession, as if he's done this before.

He tells Mulcahy about how he got wounded, and how he pretended he was dead while a group of North Koreans caught up with their victims. One of the dead was his buddy Josh Levin. The young man - actually named Gerald Mullen - took his friend's uniform and transfer orders, and plans to get out of Korea.

Mulcahy is shocked, and tries to talk Mullen out of it, saying that when he returns home, he won't be able to be either Mullen or Levin. But Mullen is determined, and says he's going through with the plan, regardless. He asks Mulcahy for forgiveness, but Mulcahy refuses, saying, "How can I, when you're virtually unrepentant?"

Meanwhile, Hawkeye has been traveling around camp asking for photos of women as a way to help Mathes. After gathering a large amount, he and Margaret return with a reply written to his ex-girlfriend, claiming the soldier cannot remember which woman she is and instructing her to remove her own picture while returning the rest. The wounded man's spirits are greatly lifted by this, and he adds a touch of his own: instructing Hawkeye to send the letter "postage due."

Later, Father Mulcahy visits Col. Potter for advice, and catches Potter in the middle of looking at a family photo album. After Potter talks lovingly about his family, Mulcahy gets an idea, and leaves before he even discusses anything with Potter.

Mulcahy comes back to see Mullen, armed with mail for Josh Levin. Levin's family and girlfriend are overjoyed with the news of his impending return. Mulcahy stresses that Levin's family will be gravely hurt by Mullen's actions, since Levin will of course never return home, and they will never learn what happened to him. Mulcahy then gets up and leaves.

The next day, the wounded in Post Op are moved out - some are sent home, others back to the front. Just before the jeep heading back to the fighting leaves, Mullen hands the mail and the dog tags to Mulcahy, asking him to return them to Levin's family. He then asks to climb aboard the jeep, claiming a mix-up. Mulcahy smiles as the jeep takes off, with Mullen in it.

A comic relief is the story of an annuity salesman, Corporal Alvin Rice, who just can't stop pitching annuities to anyone with ears, even the other wounded (three of his newest clients include Col Potter ;Major Houlihan; Nurse Kelly); both B.J. and Charles get so tired of listening to the sales talk that they trick him into being quiet until he leaves MASH 4077 and starts his sales talk all over again, to the relief of both doctors. 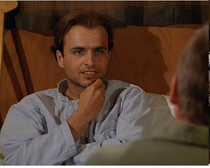 Joe Pantoliono as CPL Mullen, who's assumed the identity of a deceased fellow soldier in his unit, Josh Levin. 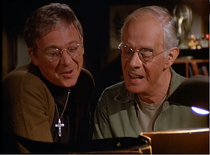 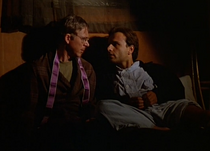 Mulcahy is able to persuade Mullen, who's trying to keep up the rouse in assuming Levin's idenity. 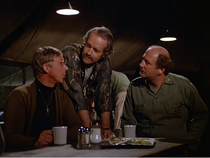 Mulcahy with BJ and Charles in the mess hall. 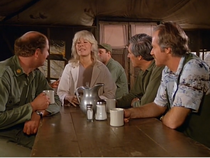 The gang in the mess hall. 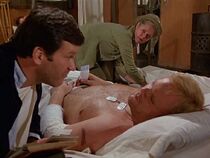 Rice tries to pitch his annuity sales to the dispirited James Mathes who is more concerned about his "Dear John" letter. Looking on is Jo Ann Thompson. 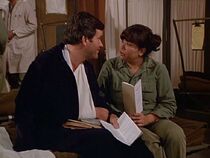 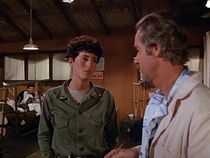 Shari Saba, billed as "nurse", asks B.J. to shut Rice up. He can be seen doing his sales pitch to an unknown patient in the background. 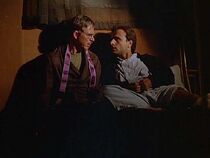 Josh Levin, who admits that he's really CPL Gerald Mullen making his confession to Mulcahy, haven taken his comrade's dogtags after he was killed in their foxhole by artillery. The camera zooms in slowly onto them in the darkened room for this important scene. 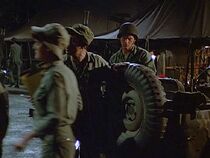 Bill Snider, shortly to become a regular extra playing various G.I.s. Here is one of his earlier appearances as a driver. He is the one wearing the helmet. 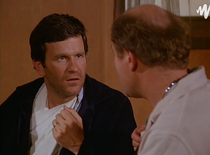 Charles is able to get Rice to stop his insurance sales pitch, in asking him to refrain from talking, in getting him to think it's to save his voice.
Add a photo to this gallery

Retrieved from "https://mash.fandom.com/wiki/Identity_Crisis_(TV_series_episode)?oldid=22475"
Community content is available under CC-BY-SA unless otherwise noted.