Iron Guts Kelly was the fourth episode of Season 3 of the CBS-TV series M*A*S*H, also the 52nd overall series episode. Written by Larry Gelbart and Sid Dorfman, and directed by Don Weis, it first aired on October 1, 1974.

When a visiting General dies inconveniently in her tent, Margaret pleads for Hawkeye and Trapper to help her, but the General's aide has other ideas.

Lieutenant General “Iron Guts” Kelly (James Gregory), one of the top generals in the U.S. Army, is arriving in camp. Henry is nervous about his arrival and tries chewing gum to cover the alcohol on his breath, but ends up giving the General a gummy salute when he and his aide, Colonel Wortman, arrive.

Kelly is impressed with the camp's handling of wounded and observes Hawkeye and Trapper during surgery. After some mawkish platitudes for the doctors and nurses, it's off to the Officers’ Club where Henry has a drink with Kelly and Wortman. Frank & Margaret arrive and Kelly is immediately smitten with the camp's Head Nurse and, of course, Margaret is more than happy to dally with a General.

Kelly is delighted to have a photo taken with Margaret, but when Frank wants a photo, he proposes that Wortman have Frank give him a tour of the motor pool to see how well it conforms to the Pentagon's "new Franistan Plan". He tells Wortman to take his time, at least a couple of hours. Wortman understands and plays along. The General then retires to Margaret's tent for a nightcap.

In the middle of the night, a panicked Margaret bursts into the Swamp, telling Hawkeye and Trapper she's in “terrible trouble.” Back in her tent, the doctors find General Kelly seemingly unconscious, but when Hawkeye takes his pulse he tells Margaret, "If his last words were 'I shall return', don't wait." In other words, the general was dead.

Margaret and the doctors begin to plan out what to do but then they're interrupted by Frank. So they put the General into Margaret's closet and Hawkeye and Trapper pretend to play cards while Margaret tries, with some difficulty, to get rid of Frank.

Hawkeye and Trapper drag the body to the VIP Tent where they find Wortman shaving his head. He's shocked to hear of the general's death, but, wanting to preserve Kelly's heroic legacy, Wortman intends to concoct a grand story about General Kelly dying in battle, and requests Hawkeye and Trapper sign a blank death certificate so he himself can fill in the details later, but they both refuse to do so, even after Wortman makes it a direct order. Wortman threatens them with court martial, but when Trapper warns him that they'll be the ones telling the truth, Wortman appeals to their sense of fair play and asks the doctors to at least help him load the General's body into an ambulance so he can personally deliver it to the front and stage his death. Frank watches as Hawkeye and Trapper load the General's body into an ambulance, and then he goes to Margaret's tent to ask her why there are so many weird things going on. As he sits on Margaret's bed, he's pricked by one of the general's decorative stars, but when he questions Margaret about it, she throws him out.

Meanwhile, Wortman orders Radar to find a sector where some fighting is going on. Eventually, Radar finds a battle, and Wortman leaves satisfied, but before he can get back to the ambulance, Igor and Dennis, who were having a party, load a bunch of Korean call girls into the same vehicle and drive away. Unable to find the ambulance, Wortman goes to the Swamp to ask where it is. Hawkeye and Trapper, having heard it pull away, assumed it was Wortman driving the ambulance. Frank enters and tells them all the ambulance was full of “floosies”, and that he has arranged for a military police checkpoint to stop the vehicle and have the occupants arrested. Wortman, furious that his plan has gone awry, storms back into the orderly room to try to have the ambulance stopped at the MP checkpoint.

Just as he arrives Henry is informed of an accident just outside camp: an ambulance went over an embankment and overturned. He learns the Korean girls inside are uninjured, but General Kelly has died. Henry's confusion is heightened when Wortman takes the telephone and starts ordering off-shore bombardment by the Navy, declaring that that "Major General Robert 'Iron Guts' Kelly is gonna perish in a full-scale, blazing, all-out, glorious, star-spangled-bannered death”.

Days later, Trapper and Hawkeye read in Stars and Stripes that General Kelly has died heroically in battle. 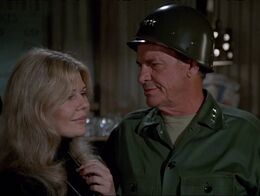 General Kelly takes a shine to Margaret and she with him. 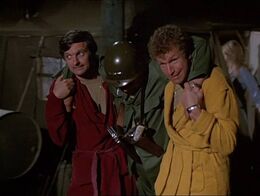 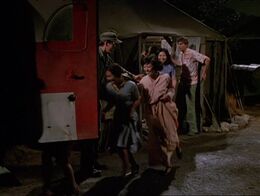 the party over, Igor and Dennis load their "local lovelies" into an ambulance, not knowing that General Kelly's body is inside!
Add a photo to this gallery
Retrieved from "https://mash.fandom.com/wiki/Iron_Guts_Kelly_(TV_series_episode)?oldid=24850"
Community content is available under CC-BY-SA unless otherwise noted.