L.I.P. was the seventh episode of Season 2 of the TV series M*A*S*H, also the 31st overall episode of the series. Written by Larry Gelbart and Laurence Marks from an original story by Carl Kleinschmitt and directed by William Wiard, It originally aired on CBS-TV on October 27, 1973.

Hawkeye has a new love interest, the newly arrived nurse Lt. Regina Hoffman. However his romantic interludes are interrupted by his efforts to help a G.I. Corporal Walker marry a Korean woman. It turns out that Hoffman is a racist who does not approve of inter-racial marriages and Hawkeye has to deal with a conflict between his principles and his romantic inclinations.

Hawkeye is busy trying to make time with a new nurse, Lt. Regina Hoffman (Corrine Camacho). After the movie, they wander back to her tent, but she rebuffs him, offering him a handshake. Hawkeye looks at her hand in disbelief.

Back in The Swamp, Hawkeye is drowning his sorrows, when a Cpl. Walker comes by, asking for Hawkeye's help.

Walker has a "wife" (a Korean woman who would only sleep with him if they were married, so Walker had the cook perform the ceremony) and a baby. The baby is sick, and Hawkeye diagnoses it as colic.

Walker also tells him another problem he has - he's being shipped out in a few weeks, and he doesn't want to leave his wife and kid behind. He asks Hawkeye for help.

Hawkeye gets Henry involved, who warns Hawkeye that the Army takes forever to clear all the paperwork, and it's a red-tape nightmare.

The next night, Hawkeye has another date with Lt. Hoffman, and he is smitten. She's flirty, talks about loves doing things outdoors, as well as golfing. Hawkeye's in love.

The next day, a Lt. Willis (Burt Young) from C.I.D. arrives to look into the Walker matter. He needs to talk to Hawkeye as well as Walker, and starts asking about Hawkeye's past.

This drags Hawkeye from another date with Lt. Hoffman, and he is none too happy about that. But he dutifully answers Willis' questions, and in so doing lets it slip that Walker and the woman have a baby. Willis flatly denies the marriage application on the spot.

Hawkeye makes apologies to Lt. Hoffman, asking to give him just a little more time. He and Trapper decide to frame Willis - they drug his drink, knocking him out. He wakes up covered in lipstick and women's undergarments, with Hawkeye and Trapper promising they took pictures.

Willis thinks they're bluffing, but he can't be sure. After suggesting they're going to make a case either way, Willis gives in to Hawkeye and Trapper, approves the marriage, and hot foots it out of the 4077th.

Hawkeye finally makes it back to Lt. Hoffman, and she asks him what kept him. He tells her about Walker, and his wife and baby. Hawkeye then wants to return to romance, but Hoffman keeps asking questions.

She finally asks, incredulously, "...and so you had to arrange for a marriage between one of our guys and a gook?"

Hawkeye, his romantic interest rapidly fading, tries to assuage her, but once she starts talking about "our people" (meaning Whites), Hawkeye pulls away. He then gives her a handshake, saying he wants the original one back. He tells her that, even with all her beauty and charm, "There are some pretty unappetizing ideas in there and I don't think I can take the mix."

Lt. Hoffman is incensed at this, and asks, "Is that all?" Hawkeye, while taking back the bottle of wine he brought, says no, offering her a big fat raspberry as he leaves her tent.

Later, Walker and his "wife" are genuinely married by Father Mulcahy, with Klinger catching the bouquet. 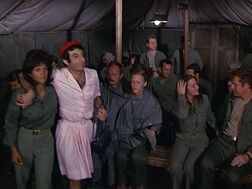 The crowd disperses at the end of the movie at the beginning of the episode. Plenty of recognisable faces here. Marcia Gelman is Trapper's date. Sheila Lauritsen is sharing a poncho with an unidentified man. Gwen Farrell is with Klinger. 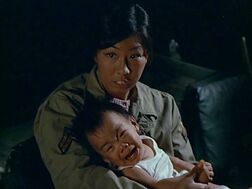 Corporal Phil Walker's wife Kim, and child. Both are uncredited. 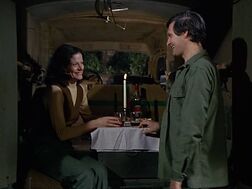 Hawkeye's date with Lieutenant Regina Hoffman, showing a rare interior shot of the ambulance. The racks and litters can be seen on the side walls, but what is that contraption projecting from the roof?
Community content is available under CC-BY-SA unless otherwise noted.
Advertisement