As a stuntman, he has performed in shows such as Charlie Chan and the Curse of the Dragon Queen (1981), Showdown in Little Tokyo (1991) and Beverly Hills Ninja (1997).

Leland retired in 1997 to work at a real estate investment and consulting company started by his father. He married his wife Peggy on December 17, 1991 and they have two children.[1][2]

Leland is the eldest great-grandson of Dr. Sun Yat-sen, the Chinese revolutionary and first president and founding father of the Republic of China. Since 2015 Leland has been chairperson and president of the Sun Yat-sen Center Foundation, based in Honolulu, Hawaii, which works to promote the ideals and teachings of the great Chinese statesman.

Leland Sun had 4 credited appearances on M*A*S*H ranging from Season 3 to Season 10. There is however some doubt about the appearance in Season 3: see the comments in the gallery. One of his more memorable appearances was as a wounded Chinese soldier in Season 8's "Are You Now, Margaret?". Leland is in character here, being ethnic Chinese. While in post op, he has a few lines where he expresses his thanks to Hawkeye in Cantonese. 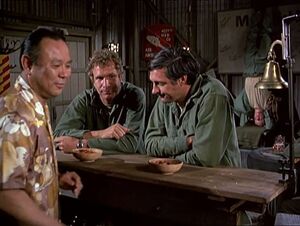 This is the second Mr. Kwang in "There Is Nothing Like a Nurse" and he is not played by Leland Sun. Going by the broadcast date, Leland should be 24 years old here but this actor looks a lot older. 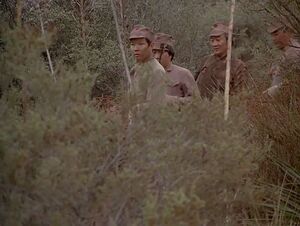 The soldier on the left (first in the line) is most likely Leland. He's the only soldier with a speaking part and he gives instructions to the rest so he must be the squad leader. The scene is from "Comrades in Arms". 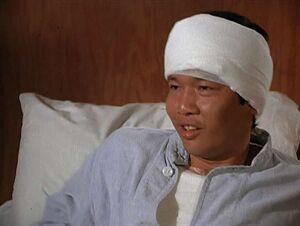 Leland plays a Chinese patient with a speaking part in "Are You Now, Margaret?". There's no doubt about the identification this time.
Add a photo to this gallery

Retrieved from "https://mash.fandom.com/wiki/Leland_Sun?oldid=19415"
Community content is available under CC-BY-SA unless otherwise noted.