Lieutenant Louise Simmons is a nurse who makes a single appearance in the Season 3 episode "Springtime". The part of Nurse Simmons was played by Mary Kay Place who also co-wrote the episode with Linda Bloodworth.

To Hawkeye and Trapper, Nurse Simmons is "short, freckles, fat glasses". But it is a lovely spring day and anything can happen. Radar comes across Simmons sunbathing in a camo pattern bathing suit and is instantly smitten. Continuing on his mail round, he delivers a letter to Klinger who is reading a book of poetry by Rupert Brooke. When Klinger runs off (all excited because his fiancée has agreed to marry him), Radar picks up the book and reads a few lines from Rupert Brooke's poem "Love": "They have known shame, who loved unloved. Even then / When two mouths thirsty for each other find slaking." He is inspired but does not know what to do next.

He meets Simmons again at the bulletin board where she is busy copying down the volleyball fixtures, but Radar and Simmons pointedly ignore each other. Not making any progress, Radar seeks advice from Hawkeye and Trapper. He can't make a move on her because he is ignoring her all the time. "Why?" asks Hawkeye. "Because she's ignoring me." "But you ignored her first," Hawkeye reminds him. "Yeah, that's because I'm trying to beat her to the ignore," Radar says. The doctors suggest a simple way out - ask her to a movie.

Unfortunately, Simmons is not interested in movies, preferring to stay in, listen to music or read poetry. Seizing this opening, Radar turns up at Simmons' tent that night with Klinger's poetry book. Simmons invites him in and asks him to read some poems to her. He opens the books and clumsily reads some thoroughly unromantic lines from Rupert Brooke's "Channel Passage" about retching and being sick on a ship. Suddenly Simmons pounces on Radar exclaiming, "You don't give a girl a chance do you!" and "There ought to be a law against guys like you!" She pushes Radar onto the bed, with Radar all the while protesting that she is "bending the book!"

Much later, Radar staggers into the company office, shirt ripped open and lipstick all over his face. Trapper and Hawkeye, who are there for Klinger's wedding to his fiancée over the radio, are astonished. "Radar, what happened to you?" "I think I've been slaked," Radar says. 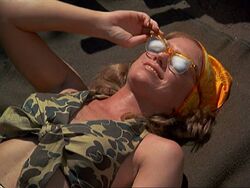 Simmons as she appeared when Radar first encounters her. The clothes are not standard issue - but the nurses probably modified whatever their uniforms freely. Klinger has a sewing machine, after all. 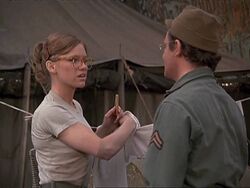 Simmons at the washing line with Radar. 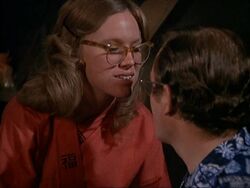 "There ought to be a law against guys like you!" Simmons' red gown was also worn by "Knocko" McCarthy in the Pilot episode.
Add a photo to this gallery
Retrieved from "https://mash.fandom.com/wiki/Lieutenant_Louise_Simmons?oldid=22382"
Community content is available under CC-BY-SA unless otherwise noted.