C.I.D Officer from Tokyo who comes to the 4077th to investigate Corporal Walker's application to marry a local Korean woman

M*A*S*H in a single guest appearance

Burt Young
Lieutenant Willis is a US army CID officer who makes a single appearance during the Season 2 episode of M*A*S*H titled "L.I.P.. The part of Lt. Willis was played by Burt Young.

Willis is a C.I.D. officer from Tokyo who comes to the 4077th MASH to investigate the application of Corporal Walker to marry a local Korean woman. Walker is in a hurry to get approval because he is due to be posted back to the U.S. and wants to marry the girl and bring her and their child back home.

Upon arrival at the camp, Willis first goes to the Swamp to interview Hawkeye about Walker's background. Hawkeye wants to delay the session until the next day because he has a date set up with Lieutenant Regina Hoffman but Willis is insistent so Hawkeye has to send Klinger to keep Regina occupied while he attends to Willis. After asking Hawkeye a lot of questions, he tells Hawkeye he doesn't see any case for leapfrogging procedure or expediting the application. Hawkeye has, however, been anticipating this, and has been plying Willis with martinis. Willis, who has been enjoying the drinks, keeps asking for more until he passes out.

Willis wakes up, "two hours and three nurses" later, with lipstick on his vest and other incriminating evidence on him. Radar comes in with his uniform, all freshly laundered, except, Radar says, they couldn't get the mascara off his Good Conduct ribbon. The photos, Radar says, will be ready in 20 minutes. Willis tells Hawkeye he knows it is a setup so that he will be forced to approve the Walker application. He isn't buying it. "It never happened!" he says. But Trapper challenges him to take the chance. What if it did happen? Willis relents and signs the approval, and asks for another drink! As he is leaving, he tells Hawkeye and Trapper, "The way you guys operate, I wouldn't mind if you took care of my hernia." "With or without pictures?" Hawkeye asks. 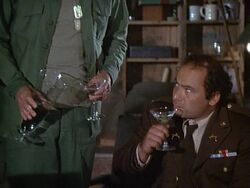 Willis begins the interview with a round of drinks. His First Lieutenant's bar (dull silver) can just be seen on his shoulders. This shot also shows a good view of his medals ribbons. Someone can have fun identifying them. 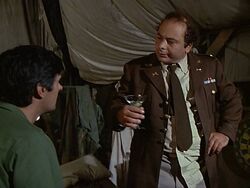 As the interview progresses, Willis gets more casual with his dressing. 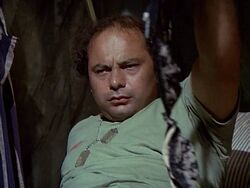 Willis waking up "two hours and three nurses" later, with incriminating evidence all around him, courtesy of Hawkeye and Trapper 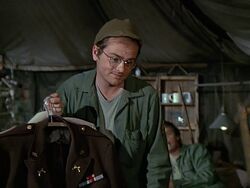 The Good Conduct ribbon is at the top. Red center with thin red stripes on either side. This award shows that he was once an Enlisted Man as it is given to officers. Col. Potter is also quite proud of his Good Conduct Medal with clasp as he tells Radar in "Change of Command".
Community content is available under CC-BY-SA unless otherwise noted.
Advertisement