Life With Father was the eighth episode of Season 3 of the CBS-TV series M*A*S*H, also the 56th overall series episode. Written by Everett Greenbaum and Jim Fritzell, and directed by Hy Averback, it first aired on October 29, 1974.

Mail from home worries Henry that Lorraine may be seeing other men. Father Mulcahy presides over a Jewish circumcision ceremony for the Korean-born son of a US GI.

Mail call brings a little bit of something for everone: Father Mulcahy gets a letter from his sister, Trapper gets a letter in crayon from his daughter, and Hawkeye accepts a generic letter addressed to “Occupant – MASH 4077.” It turns out to be a visual puzzle where you can win a pony if you can find the faces of ten U.S. presidents in the picture. Hawkeye and Trapper quickly get to work on it.

Henry gets another delivery from the Tabasco Film Co: Yvonne, Renée, and Loretta in "What the Parrot Saw" and Renée, Loretta, and the parrot in "What Yvonne Saw." The films are set to be screened at midnight in the generator shed.

A young Korean woman toting a small infant wanders the camp looking for a rabbi, but nobody understands what she is saying. She first encounters Frank and Margaret, but they barely give her the time of day. Hawkeye and Trapper fare no better, but once the woman produces a letter from her G.I. husband, it becomes clear she is looking for a rabbi to perform a bris for her newborn son. The baby's father is a Corporal Walter Jacobson, who is busy at the front and wants his child to be circumcised in accordance with Jewish tradition.

Henry is elated over a letter from his wife, Lorraine, supposedly giving him permission to fool around with other women. But the more he thinks about it, the more anxious he becomes.

Trapper and Hawkeye continue to work on their presidential puzzle and encounter Frank and Margaret locking lips in the x-ray room. The majors tell the captains they heard about the circumcision and will file a report if they perform this “elective surgery.” Henry is unraveling and assumes Lorraine has been unfaithful, so taking Hawkeye's advice, he goes to visit Father Mulcahy, who also is struggling with the contents of his letter. His sister is a nun and she wants her brother's blessing to leave the convent and start a family of her own.

In a well-directed scene, Father Mulcahy and Henry alternate sharing their feelings about their letters without listening to a word the other says. Henry then proceeds to call Lorraine about the letter and his worst fears come true: she (supposedly) had an affair with an orthodontist named Al Franklin.

Radar tracks down a rabbi on the aircraft carrier U.S.S. Essex offshore near Incheon. The rabbi will communicate bris instructions with Radar by morse code, which will be relayed to Father Mulcahy in the O.R. by radio. As Trapper and Hawkeye perform the surgery, Frank and Margaret take photographs for proof of guilt. The signal from the Essex fades before Mulcahy can finish, but the Korean mother finishes the ceremony – in Hebrew, no less.

Frank cackles about having the photographic proof to bust the captains, but foolishly hands the film to Trapper, who yanks it out of the canister to “inspect” (ruin) the pictures, thus defeating the antagonists again.

(The following scene is usually cut from syndicated airings.) At a party for the circumcised infant, Father Mulcahy realizes he's never seen a happier person than the Korean woman holding her baby, so he decides to give Kathy his blessing. A version of the traditional Israeli folk song "Hava Nagila" starts playing, and everyone gets up to dance. Then, in one of the most truly bizarre endings for an episode of M*A*S*H, Hawkeye shows up on a white horse, and he and Trapper gallop around the camp to practice for their impending pony. 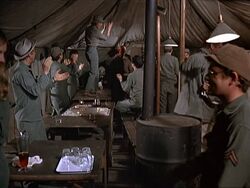 The bris party. Someone has just put on some Jewish music and people are getting up to dance. A nurse is dancing on the table. Look right at the back of the tent near the center of the picture. There is a soldier in Indian Army uniform with a red/white turban. 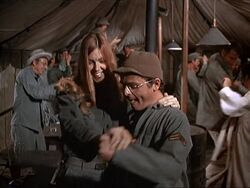 In the foreground, an uncredited Mary Peters (Lieutenant Peters) dancing with Radar.
Community content is available under CC-BY-SA unless otherwise noted.
Advertisement