Lil was the third episode of Season 7  of the M*A*S*H TV series, also the 150th overall series episode. The episode, which was written by Sheldon Bull, was directed by Burt Metcalfe. The episode originally aired on CBS-TV on October 2, 1978.

Radar gets bent out of shape when he thinks Colonel Potter is spending too much time with a visiting female colonel, and Hawkeye tries to figure out what B.J.'s initials stand for.

The 4077th is visited for inspection by Col. Lillian Rayburn (Carmen Mathews), who is not your typical hard-nosed stickler for regulations: she's warm and friendly, and seems to take a shine to Col. Potter, who is the only one in camp around her same age. They've known a lot of the same people, and immediately fall into telling each other stories from their overlapping past.

With Hawkeye spending his time trying to find out what B.J.'s initials stand for (after an off-hand remark by Col. Rayburn), and Margaret in a tizzy trying to be perfect for the inspection, Col. Potter and Lil - as he comes to call her - spend all their time together, sharing a bottle of scotch and going on a picnic.

Radar is not pleased at this turn of events, feeling that this Col. Potter is acting improperly. Margaret, once she has a talk with Lil about her future in the Army, relaxes and recommits herself to a career in the military. They share their bi-polar feelings over some drinks in the Officers Club.

After a few more days like this, Col. Potter and Lil only grow closer. One night, in Lil's tent over some booze, she makes a move on Col. Potter. Potter is stunned into silence, and has to awkwardly explain that nothing like what Lil expects to happen is going to happen.

He apologizes, saying that maybe he sent Lil the wrong message being so friendly - he was just so delighted to have someone of his own age to pal around with. But as long as he has a woman at home waiting for him...

Lil understands, and apologizes herself for misreading the situation. Awkward but friendly, they say good night, with Lil planning to leave for the next MASH the following morning.

The next morning, B.J., sick of Hawkeye's unyielding quest to find out his "real" name, gives it up: his parents were named Bea and Jay, hence, B.J. Hawkeye still isn't buying it. 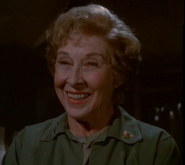