Love Story was the 14th episode in both broadcast and production order for Season 1 of the TV series M*A*S*H. It was also the 14th overall in the series. It originally aired on CBS-TV on January 7, 1973. It was written by Earl Bellamy, and directed by Laurence Marks.

Radar receives a "Dear John" from his fiancée and becomes depressed until a new nurse arrives, when he instantly falls in love with her. Majors Houlihan and Burns plot to break up the pair as their relationship is against regulations, but Hawkeye and Trapper are determined to help Radar along.

The episode opens in the mess tent, where Radar has lost his usual enormous appetite. Hawkeye and Trapper report this to Henry, who reveals that Radar has been in a very bad mood recently, sitting on top of a filing cabinet in the fetal position and not completing reports for headquarters. When Houlihan complains that she was sent ordinary cotton thread instead of surgical silk, they finally conclude that there is something wrong with Radar - he has never before messed up a requisition.

They give Radar a physical examination, which reveals that he is completely healthy physically - so the problem has to be in his mind. Frank immediately assumes that he is faking the symptoms, and that he should be assigned extra duty. But when Hawkeye and Trapper apply the appropriate pressure on Radar, he hands over a recording which turns out to be a Dear John letter, which includes the sounds of his crush, Linda Sue making out with her new engagement, Elroy Fimple.

Hawkeye and Trapper attempt to find another partner for Radar, but the nurses refuse to participate - they either don't like Radar or are busy with another date. Radar is just about to give up when a new nurse is transferred to the 4077th, who he immediately becomes infatuated with.

Hawkeye does some reconn and finds out that the replacement nurse, Lieutenant Louise Anderson, is interested in classical literature and music (and not so interested in Hawkeye). They drop this fact to Radar and train him up in faking intellectual pursuits so he would immediately appeal to the new nurse, and to respond with phrases like "Ah, Bach!" and "I'm partial to the fugue," in response to a discussion about music.

Hawkeye and Trapper manage to get Radar into a discussion in the mess tent with Nurse Anderson, where he throws every single stock phrase he is given and he scrapes through, only just. He manages to get her interested - she offers to lend him her record collection, for example.

Unfortunately, Frank and Margaret see it and do not approve of the love affair between an enlisted and an officer, and bring this up to Henry. When Houlihan threatens to send a complaint to General Clayton, Hawkeye plots to break up her romance with Frank Burns.

Some time later, Henry gives a lecture about the management of cardiogenic shock in the mess tent, Radar tells Margaret she is needed in Post-op. Hawkeye sneaks in and sits in her place, and gets fondled by Frank Burns.

That night, when Frank is preparing for a date with Hot Lips, Hawkeye replaces his aftershave with chloroform so that he passes out and cannot attend.

The next night, Radar again tells Margaret she is needed in Post-Op just as Frank is due to meet her in her tent, so that Frank finds Hawkeye and Trapper in her bed instead. When Hot Lips finally asks, in anger, why she is subjected to this plot, she finally agrees to stop pestering Henry and pressing to end Radar's relationship with Nurse Anderson.

But things don't work out for Radar. He can't keep up with Louise's conversation topics and falls asleep listening to her over a meal in the mess tent. Hawkeye and Trapper come over to wake him up and he instinctively blurts out: "Ah, Bach!" 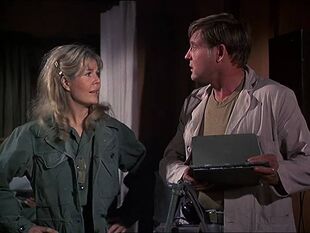 Jerry Harper as an unnamed sergeant. He is on Post Op duty. It is unusual for a corpsman to be on Post Op duty as they normally perform orderly duties. This suggests that the sergeant might be more highly qualified than regular corpsmen like Klinger. He might be a surgical technician, like Sergeant Barney Hutchinson, perhaps a male nurse in civilian life.

(Hawkeye is teaching Radar some stock phrases to use in conversation.)

(Hawkeye on the greatness of love)

(Hawkeye and Trapper watch Frank putting on shaving cologne, preparing for a date)