Movie Tonight was the 119th episode of M*A*S*H, the 22nd in the fifth season of the show, which originally aired on CBS-TV on February 22, 1977. It was written by Gene Reynolds, Don Reo, Allan Katz, and Jay Folb and directed by Burt Metcalfe.

Colonel Potter hopes a Western will be the cure for the 4077th's morale problem. But during the show, the staff of the camp is forced to make its own entertainment during the frequent film breakages.

Without any wounded to take care of, the 4077th is bored and cranky. A simple session of cleaning up the O.R. leads to the staff yelling at one another. Col. Potter gets so frustrated he walks out on all of them. But Father Mulcahy, coming from Seoul, brings some good news: a movie that Potter requested and he is clearly very excited about. He's so excited, in fact, he announces that his "all-time favorite movie" will be shown after dinner.

The crankiness continues through dinner - everyone's in such a bad mood, no one's talking, so dinner is a tension-filled event. But Potter comes in and announces the night's movie is the classic Henry Fonda picture My Darling Clementine (1946). This - and Potter's enthusiasm - seems to cheer everyone up.

Later, the movie starts, to the cheers and applause of the audience. Unfortunately, just a few minutes into the picture, the film goes off the reel and the screen goes dark. As Klinger fixes the film, Col. Potter organizes a community sing-along, and after some cajoling they all sing "The Tennessee Waltz."

The film starts again, and runs for another few minutes, when - at a crucial scene - it goes out again. The crowd starts to get really annoyed, when Father Mulcahy - via piano - breaks into "Gee Mom, I Want To Go Home", causing everyone to sing along, and add their own specific sets of lyrics. Radar then does some impressions, followed by everyone doing impressions of Father Mulcahy (Radar doing the best job), ending with Hot Lips singing a song all on her own, getting so wrapped up in the performance she doesn't even stop after the movie starts up again.

During the film's climactic shoot-out, everyone gets in on the act, play-pretending shooting each other, with them all falling over in mock agony. It leads to everyone laying on the floor as the movie rolls on. The festive mood is broken when a jeep arrives carrying wounded, snapping everyone into action.

In a closing scene not shown in most syndicated airings, we see the staff of the MASH hard at work in the OR. Col. Potter starts softly singing "My Darling Clementine", and one by one, the rest join in. 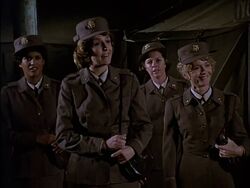 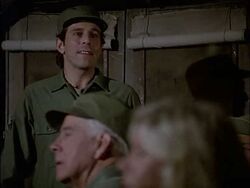 Jeffrey Kramer as the driver who comes to fetch the nurses but he also stays for the movie. In "Father's Day" (Season 9) he is also an I Corps driver. 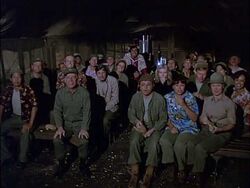 The movie audience is good for identifying extras. Kellye Nakahara and Jennifer Davis are with Radar on the front row. 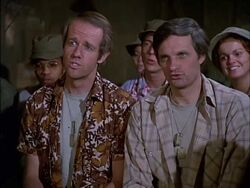 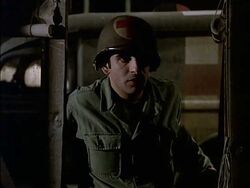 Carmine Scelza has a credit as "Corpsman". This is probably him as he is the only corpsman with a speaking part. 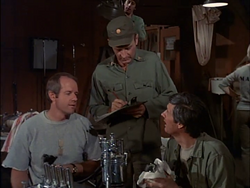 Carmine Scelza is probably the one cleaning the light behind Burns. Everyone in this scene has a credit. 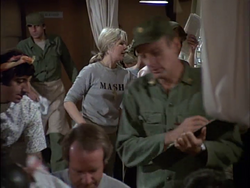 This is probably Carmine again. He is in the background, just coming in through the door.