"Requiem for a Lightweight" (Season 1)

Marcia Strassman
Lieutenant Margaret "Margie" Cutler was a nurse character who appeared for six episodes in the first season of the CBS-TV series M*A*S*H first season, beginning with the episode Requiem for a Lightweight. The part of Nurse Margie Cutler was played by Marcia Strassman, who would later go on to co-star in the hit ABC-TV sitcom series Welcome Back, Kotter with comedian/actor Gabe Kaplan and John Travolta.

Margie makes her first appearance as a newly arrived nurse in Requiem for a Lightweight. The episode begins with the P.A. system announcing the arrival of wounded and summoning all personnel to the O.R. Several nurses rush out of the shower tent wrapped in towels. Margie is the last one to do so, and collides with Hawkeye and Trapper along the way. She manages to extricate herself from them but loses her towel while running off. This elicits one of Hawkeye and Trapper's rare salutes. Both Doctors become smitten with her and immediately vie for her affections. However, they both go to Cutler's tent and find her packing her things. Margaret has decided that she is a distraction for the doctors and has had transferred her to another unit. Henry, who is under pressure to put up a boxer for an inter-unit boxer match agrees to bring Margie back if one of the doctors survive three rounds in the ring. The unenviable honor falls to Trapper. With some creative use of ether on his boxing glove, Trapper makes it through the match. Henry brings back Margie as promised - and, of course, she is attracted to Trapper for fighting for her.

For the rest of her appearances, however, she becomes Hawkeye's love interest. Along with Trapper and Hawkeye, Margie would also act as a foil to both Majors Houlihan and Burns, taking part in many of Hawkeye and Trapper's shenanigans.

Her second appearance is in Yankee Doodle Doctor, where she takes part in Hawkeye and Trapper's farcical Marx brothers movie about the 4077th MASH.

In Bananas, Crackers and Nuts, she approaches Hawkeye, offering to spend some time with him as he had asked her out so often without success. However, Hawkeye has been pretending to be crazy in order to qualify for some R&R, so he turns down Margie's advances.

In Edwina, Margie becomes the ring leader of the nurses. Nobody wants to date her friend, the nurse Edwina, so she organizes all the nurses to reject the advances of the men in the camp until someone agrees to do so. Desperate, the men in the camp draw straws and Hawkeye gets the short one - which amuses Margie greatly.

In Love Story, Radar is all depressed after receiving a "Dear John" recording from his fiancée, so it's now the turn of the men to try to organize a date for him with one of the nurses. Hawkeye approaches Margie in Post-Op, but Margie says she is unable as she already has another date for the night. "With whom?" Hawkeye asks. "You!" she replies. He immediately starts considering other options.

After this, there will be a fairly long break until Ceasefire. Here, the camp is jubilant to hear news of an impending ceasefire and everyone's thoughts turn to going home. Meeting Hawkeye in Post-Op, Margie drags him to a private corner and tells him they have to start making "going-home" plans. However Hawkeye rejects her, telling her a lie that he is "suffering from terminal marriage." This earns him a smash on the head with a bed pan.

Ceasefire would be Margie's last appearance. After this, she would be written out of the series with no explanation. Given that Hawkeye had rejected her with a lie, one would imagine any future relationship between the two would be very tense. 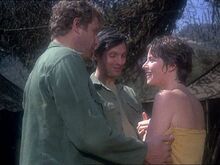 One of the first views of Margie Cutler - in "Requiem for a Lightweight". She collides into Hawkeye and Trapper while running out of the shower tent. She will shortly lose her towel and gain a rare salute from the two doctors. 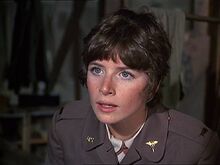 Towards the end of "Requiem for a Lightweight", Margie is brought back to the 4077th after the boxing match. The bars on her shoulders, brassy in color, look very much like Second Lieutenant's bars. Unfortunately she doesn't wear insignia in her other appearances so her rank cannot be confirmed. 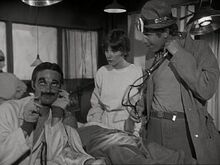 Margie acting in the Grouch Marx-like movie that Hawkeye and Trapper made. Scene from "Yankee Doodle Doctor". 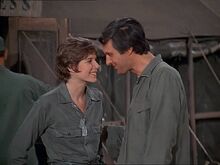 In "Bananas, Crackers and Nuts", Margie tries to be friendly with Hawkeye but only gets rejected by him. 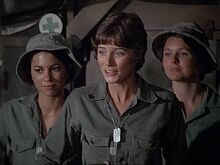 In the episode "Edwina", Hawkeye has just drawn the short straw to date Lieutenant Edwina Ferguson. Margie is delighted and can't wait to see how it turns out. "Now we'll all get to see how the great lover operates," she says. 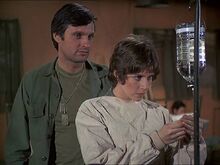 In "Love Story", Margie turns down Hawkeye's request to date Radar because she already has a date ... with Hawkeye! 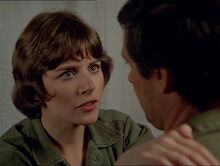 Her last appearance. In "Ceasefire", she wants a long-term relationship but Hawkeye turns her down, saying he is suffering from "terminal marriage".
Community content is available under CC-BY-SA unless otherwise noted.
Advertisement