Officers Only was the 15th episode of Season 2 of the TV series M*A*S*H, also the 39th overall episode of the series. Written by Ed Jurist and directed by Jackie Cooper, It originally aired on CBS-TV on December 22, 1973.

After saving the life of a General's son, Hawkeye and the rest of the 4077th are rewarded with their own Officers' Club. This causes some discontent when enlisted men are refused entry. When the General's son, who is an enlisted man, is denied entrance, Henry agrees to let the families of officers use the club. Hawkeye then proceeds to "adopt" all the enlisted men in camp.

Trapper faces a difficult chest operation and summons an exhausted Hawkeye to assist in surgery. As they operate, Henry informs them they are working on Private Mitchell, the son of General Mitchell.

Meanwhile, Klinger introduces his latest section eight ploy: pregnancy! Henry is none too pleased with it, especially when General Mitchell suddenly shows up. However, his demeanor brightens when the General delivers him a crate of 12-year-old scotch as a token of his appreciation for saving his boy.

Mitchell's memory is still poor, for he doesn't seem to recognize Majors Burns or Houlihan when introduced to them in post-op. (They had pressed charges against Henry and met Mitchell at the disciplinary hearing in "The Trial of Henry Blake")

Margaret, apparently no longer her own #1 (see "Hot Lips and Empty Arms"), is back to her old ways of sucking up to generals and shamelessly promoting Frank. Mitchell wants to reward the doctors who saved his boy, so he grants Hawkeye and Trapper three days and nights in Tokyo. Henry feels less than rewarded when he has to field numerous calls of complaint about his captains from Tokyo businesses.

Hawkeye and Trapper return from R&R to find the newly constructed Officers’ Club, which Frank tells them was donated by General Mitchell (the general is fond of his O-Clubs, after all). Unfortunately, the Officers’ Club means just that: no enlisted personnel allowed. Radar and the other enlisted give Hawkeye and Trapper the cold shoulder, and they understand why, so they talk to Henry about lifting the restriction.

As Frank and Margaret enjoy a quiet drink (he, a Shirley Temple, she, a scotch old-fashioned without the fruit) in the club, Hawkeye and Trapper try to get them to sign a petition allowing enlisted personnel. Naturally, they refuse.

The Officers’ Club has its official opening that night with General Mitchell and his trusty sidekick, Captain Fox, in attendance, and everyone is decked out in their Class-A's. The General's son is brought in for the festivities, but Hawkeye reminds General Mitchell his son is not an officer and, therefore, not allowed entry.

Despite protests from Henry and Frank, General Mitchell agrees with Hawkeye, saying a custom is a custom. But Hawkeye suggests they make an exception and allow family members in the club.

With Henry's concurrence, General Mitchell agrees, thus instituting a new policy. Hawkeye stands at the doorway and announces all his (enlisted) “family” who just happen to be waiting outside. These family members include Radar O’Reilly, “who’s been like a son to me", Corporal Klinger, "who’s been like a daughter", and other assorted "relatives", while those assembled start humming "The Battle Hymn of the Republic". Soon the club is overflowing with “family”.

In a closing scene not usually aired in syndication, the party seems to be winding down at the new "O-Club": Col. Blake and Nurse Watson are falling asleep in each others' arms; Radar and Nurse Kellye are happily dancing together; Klinger is slow-dancing with Nurse Gwen, and General Mitchell is dancing even slower with Margaret, much to Frank's chagrin, who has been steadily getting drunk on spiked Shirley Temples (thanks to Hawkeye and Trapper). When they suggest Frank go punch the General, he agrees, but passes out instead. 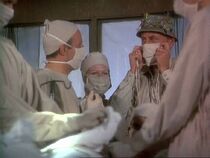 Frank barges into the O.R. insisting on replacing Trapper to operate on the General's son. He forgets who the Chief Surgeon is. Henry respects the protocol and asks Hawkeye for his decision. He tells them to leave "alphabetically". 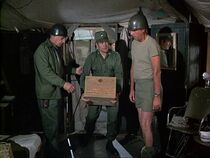 Henry is not quite prepared for General Mitchell's visit but he does welcome the gift of the case of scotch. 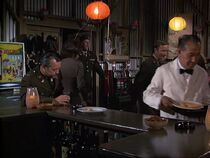 A view of the Officers Club with its early decor. There are two slot machines and a juke box. On the far wall is a Japanese painting. 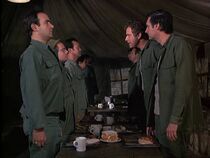 The enlisted men resent the Officers Only policy. Here they request permission to sit and resume eating in the mess tent. 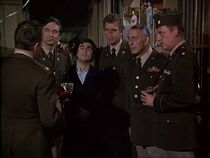 The MASH personnel debate whether enlisted men such as Mitchell's son (center) should be admitted to the Officers Club. They finally accept Hawkeye's creative suggestion to allow relatives - well the whole MASH is family! 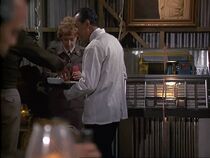 View of Patricia Stevens in her second confirmed uncredited appearamce. 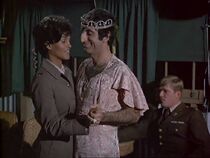 Lots of dancing action at the opening of the Officers Club. Klinger does an elegant dance with Gwen. 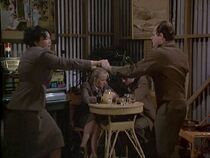 .... while Radar does an energetic number with Kellye. 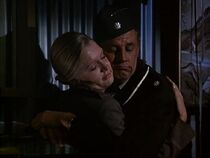 Henry dances cheek to cheek with Lieutenant Watson. He has been hitting on her since 6 episodes ago in "Dear Dad...Three". 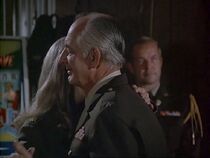 General Mitchell seems to enjoy himself, spending the night slow dancing with Margaret, watched by his aide Captain Fox.
Community content is available under CC-BY-SA unless otherwise noted.
Advertisement