Pilot was the first episode of the M*A*S*H television series. It was originally shown on September 17, 1972 and repeated twice, on April 1 and August 5, 1973. It was written by Larry Gelbart and directed by Gene Reynolds.

The Swamp's Korean houseboy, Ho-Jon, is accepted to attend school at Hawkeye's alma mater. The camp raises money to send Ho-Jon to Maine by raffling a weekend in Tokyo with a nurse, much to the chagrin of Hot Lips and Burns.

It is Korea, 1950 ("A hundred years ago"), and personnel of the 4077th Mobile Army Surgical Hospital are milling around, keeping themselves busy in between sessions in the O.R. Captains Trapper John McIntyre and Benjamin Franklin "Hawkeye" Pierce are playing golf when one of Trapper's shot lands in the mine field and blows up. Majors Frank Burns and Margaret Houlihan are in her tent, reading and playing footsie under the table. Lt. Colonel Henry Blake, the company's C.O., is popping a bottle of champagne in his tent with a nurse. Capt. Spearchucker Jones and Cpl. Walter Eugene "Radar" O'Reilly are playing catch with a football, when Radar turns and says, "Here they come!" Somebody replies, "I don't hear nothin'," to which Radar replies, "Wait for it." Choppers or helicopters arrive shortly thereafter. The opening credits play over scenes of the staff rushing to the chopper pad and tending to the wounded, featuring most of the scenes that would become the regular opening credit sequence for the rest of the series.

Hawkeye starts a letter to his father trying to describe living and working in Korea during the Korean War. During the O.R. session, Hawkeye propositions the nurse assisting him. Frank Burns gets into an argument with Nurse Ginger Bayliss about which instrument the doctor asked for versus which one he really wanted. After the session, Burns and Major Houlihan accost Pierce and McIntyre about their behavior in the O.R..

After blowing off Burns and Houlihan, Pierce and McIntyre head to The Swamp where Ho-Jon serves them martinis using gin from their still. Radar brings the mail around, and Pierce receives a letter from the dean of his alma mater that says that Ho-Jon is accepted into the school. Now all they have to do is come up with the $2,000 for travel and tuition. McIntyre suggests selling Spearchucker, but Pierce comes up with the idea of raffling off a weekend pass for two in Tokyo with a nurse for company.

Pierce and McIntyre go to Blake's office to propose the idea to him. While not completely trusting the surgeons, Blake agrees, but wants to know which nurse they have conned into going. Pierce suggests the only obvious choice, Lieutenant Dish. Blake says that she will never go for it, but Pierce is confident that he can convince her.

Later in the Swamp, Pierce and McIntyre count up the money they have collected, but it only comes to $600. Pierce decides to collect Burns' donation without Burns knowing. While Pierce is thumbing through Burns' bible, Burns walks in and demands to know what is going on. Pierce claims that he was just borrowing Burns' bible. Burns then goes on a tirade about how Pierce and McIntyre are corrupting Ho-Jon, about their snide remarks towards him, about how they are turning the camp into a brothel and about the fact that they are operating a still. Burns then grabs the still and runs across the tent. When Pierce and McIntyre corner Burns, he throws the still on the ground and breaks it.

Pierce and McIntyre go to Blake to complain, but Blake informs them that the raffle and party are canceled because he doesn't want Burns to complain to Brigadier General Hammond. Blake also tells them that he has to go to Seoul and wasn't happy about having to miss the party.

As Blake and Scorch take off in a helicopter headed for Seoul, Radar hands Pierce two weekend passes. While they are walking down to the camp from the helipad, an announcement comes over the PA system informing the camp that everyone will be confined to duty and that all other activities are canceled by order of acting commanding officer, Major Burns.

The surgeons come up with several ideas on how to deal with Burns but none of them are good enough. Then, in the recovery room, Pierce tells Burns to listen to somebody's heart. When Burns bends over the patient to listen to his heart, Pierce injects him with a sedative. A bandage is wrapped around Burns' face and Pierce leaves orders that the "patient" should be given a sedative every hour, on the hour.

At the party Houlihan approaches Pierce, who is dancing with Dish, and asks where Burns is. He says he doesn't know and that she should enjoy herself by giving somebody a dancing physical. Houlihan calls General Hammond to complain about Pierce and then checks in on the patients. When she pulls one patient's pants down to give him a shot, she recognizes Burns.

Pierce announces that they have raised $1800 for Ho-Jon and then has Dish draw a name for the raffle. He guides her hand to an entry taped to the bottom of the jar. Radar, hearing a helicopter, goes up to the helipad and greets General Hammond and Blake. As Hammond enters the party, Pierce announces that Father Mulcahy is the winner of the raffle. Houlihan enters with Burns, bandages still wrapped around his head. Hammond greets Houlihan with the nickname "Hot Lips". She exclaims, "Those two, they're ruining this war for all of us!" Hammond demands that Pierce and McIntyre be arrested, but they say they can't because the helicopters that Hammond is about to hear are going to be filled with Canadian casualties and that they have to stay and operate.

After the session, which Hammond participates in, he tells Blake that Pierce and McIntyre are the two best surgeons that he has ever seen and that Blake needs to be sure not to lose them, even to Hammond. Hammond leaves just as Pierce and McIntyre come out of the O.R. handcuffed to each other.

Viewers who pay close attention to the closing credits (see below) would have noticed a billing for Laura Miller as "Knocko". But where is she?

Captain Bridget "Knocko" McCarthy is a character from the 1970 MASH movie. She is also listed in the script for the Pilot episode of the TV series where she is described as a 30-year old attractive no-nonsense nurse.

From the script "Knocko" is the O.R. in the opening scene where she is assisting Trapper. She also has one line, when she reports that a patient she and Trapper are trying to revive is coming around. Unfortunately this bit is edited out. During the party later the episode, the script has "Knocko" dancing with Trapper but there is no speaking part.

Laura Miller never appeared in another M*A*S*H episode. She also had a short acting career and photos of her are extremely rare, and without a speaking part, it is very difficult to say for certain which person in the pilot episode she is. A best guess has to be made by studying the script. See Captain Bridget "Knocko" McCarthy for images of her.

These notes are summarizing what lines/scenes are removed from the syndicated reruns on various cable tv channels - likely to make more time for commercials and sometimes for morality issues.

This episode is relatively unscathed - just the longer introductory sequence and closing sequence - If anyone notices anything I miss in these segments, just send me a note. Be as curious as you want to be, as kind as you can afford to be, and as strong as you are. 22:02, December 2, 2015 (UTC) 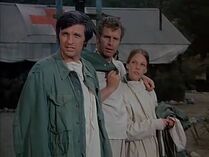 Hawkeye, Trapper and a nurse after a long O.R. session. Who is the nurse? Does she look like the Knocko McCarthy in the photo further down? 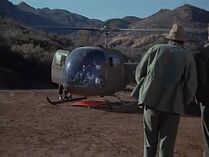 Henry and Scorch have just entered this chopper to get to Seoul. This Bell 47J chopper is a later version of the medevac choppers used in the show and is anachronistic. See Anachronisms in M*A*S*H. 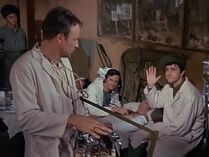 Bruno Kirby in his only appearance as Boone. He is the one waving to Frank. He helps Hawkeye and Radar sedate Frank and bundle him into bed but doesn't get any lines. 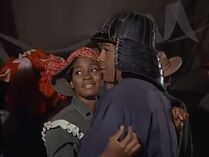 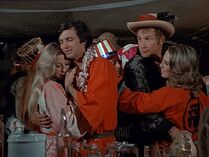 The nurse in the red gown dancing with Trapper is believed to be Knocko McCarthy. See her character page. 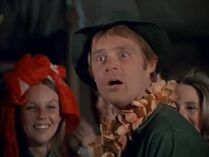 George Brown, in his only appearance as Father Mulcahy.