Point of View was the 11th episode of Season 7 of the M*A*S*H TV series, also the 158th overall series episode. The episode, which was written by Ken Levine and David Isaaces, was directed by Charles S. Dubin. The episode originally aired on CBS-TV on November 20, 1978.

Viewers get to see a wounded soldier being treated at the 4077th through his eyes.

Seen entirely from the point of view of a G.I. named Pvt. Rich (voiced by David Stafford), we follow Rich as he is wounded in battle and then flown to the 4077th.

There he's met by B.J. and Radar, and then Klinger. As he's being transported to the camp on the back of a jeep, we see that Col. Potter seems extraordinarily angry and short-tempered.

Rich is visited in Pre-Op by Hawkeye and Nurse Baker (Jan Jorden), and he sees laying next to him is his friend Pvt. Ferguson (Hank Ross). Hawkeye and B.J. determine he has a piece of shrapnel in his neck, which is preventing him from talking. He's then visited by Father Mulcahy, who reassures him.

He undergoes an x-ray from Klinger (who admits the Army taught him how to do it, something he never thought he'd know), and then gets wheeled into surgery, where Hawkeye tells him everything will be okay.

Later, Rich wakes up in Post Op, where the soldier next to him can't shut up. His mind wanders, and he notices Hawkeye, Margaret, and Winchester discussing Col. Potter's sudden change of behavior. Winchester smugly suggests it's senility.

Private Rich notices Hawkeye looking over his chart, and we can see from Hawkeye's face that not everything is working out the way he hoped. He tries to see if Rich can talk, but he's still unable to. Hawkeye says to give it more time. He then gets a sponge bath from Margaret, who is gentle and discreet, and talks her way through it so that Rich barely realizes it's happening. Before he knows it, it's over.

Col. Potter comes to visit, and he sort of fesses up to Rich that he's in a rotten, distracted mood. After Potter leaves, Klinger wheels him to the Mess Tent, where he again overhears the doctors discussing Col. Potter's strange behavior.

Potter comes by to visit again, and Rich manages to get Potter to open up about what's bugging him. Potter reveals he's forgotten his wedding anniversary, and he's so ashamed he's furious with himself and the war. Rich, using a pencil and paper, suggests Potter just call her, but Potter isn't sure.

After he leaves, Rich tells Hawkeye what's going on with Potter. Then he begins to cough, and Hawkeye decides Rich needs to go back into surgery, with Winchester assisting. Later, Rich awakens, the surgery having gone perfectly. Hawkeye asks Rich to say something, anything, and he answers, haltingly, "Don't...know...what...to...say." Hawkeye and the other doctors are thrilled to hear it.

After Radar tells Potter that they called his wife, explaining what happened and she responded that she understands how busy her husband can be with his important duties. Potter is touched at the gesture and softens up. Hawkeye thanks Rich, saying his look of confidence really helped. Rich responds with a raspy, "Thank you."

The last we see of Rich is in the Evac Bus, and Hawkeye, B.J., and Potter wish him good luck and good bye. Laying next to his buddy Ferguson, who is overjoyed at being shipped home, he silently watches the 4077th recede in the distance, the doctors waving goodbye. 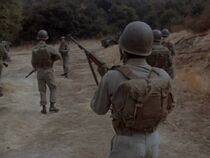 This is the only view we get of Mark Baxley, billed as the Sergeant. He is at the center in the distance. He probably got credited because he has so much shouting to do, telling Ferguson and Rich to spread out. 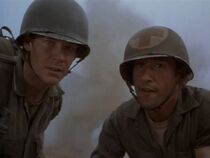 This medic at the right is the first responder so he is probably Edward Gallardo, billed as Medic #1. The soldier to the left also has a few lines here and later at the chopper pad but is uncredited. 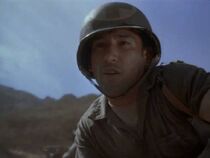 There is a billing for Medic #2 but where is he? This is the only other scene with a medic who speaks, at the pad where Rich is loaded on to the chopper. So this is Paul Tuerpe. But he looks a lot like Medic #1. 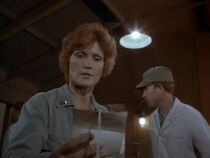 Nice foreground view of Jennifer Davis. She gets a speaking part, but is uncredited. 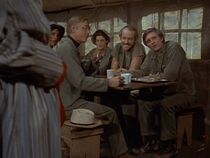 Gwen Farrell (left) and Shari Saba (next to B.J.), uncredited nurses in the mess tent.
Add a photo to this gallery

Retrieved from "https://mash.fandom.com/wiki/Point_of_View_(TV_series_episode)?oldid=22591"
Community content is available under CC-BY-SA unless otherwise noted.