Private Lorenzo Boone was a minor character who appeared in the in the 1970 Robert Altman directed M*A*S*H* film and also four times in Season 1 of the M*A*S*H TV series.

Boone in the MASH film[]

In the 1970 MASH film, actor Bud Cort made his screen debut as Private Boone who was a corpsman at the 4077th MASH. Boone is on duty in Post-Op when a patient develops complications. Major Frank Burns (Robert Duvall) asks Boone to fetch some adrenaline and a cardiac needle. Boone is nervous and unsure, and appears to have fetched the wrong item because moments later, Burns says, "You idiot. I said a cardiac needle." Boone apologizes and offers to get a nurse but Burns says it is too late and blames Boone for the patient's death, saying, "You've killed him." Trapper (Elliott Gould) witnesses the incident and feeling it is unjust, takes Burns to the supply room and punches him just when Henry Blake (Roger Bowen) enters the room with the newly arrived Major Margaret Houlihan (Sally Kellerman) on a round of introductions.

Pvt. Boone also appeared on M*A*S*H TV series played by two different actors. In the Pilot episode, Boone is played by Bruno Kirby. In the opening teaser, he is playing football with Radar and Spearchucker. He is standing behind Radar when Radar tells everyone he hears the choppers coming. Later, Boone is seen in Post-Op where he helps Hawkeye and Radar sedate Frank and bundle him into bed.

In Chief Surgeon Who?, actor Robert Gooden takes over as Boone. He is on sentry duty in the camp when he encounters General Barker who demands to know where Henry Blake is. The General walks away but turns back to see Boone walking away. He has a nurse hidden under his poncho behind him! In Henry Please Come Home, Boone is part of the plot to get rid of Frank where he suggests pushing Frank in front of a chopper with the blades going. In Germ Warfare, Hawkeye and Trapper get Boone to drive Frank's blood and urine samples to the lab in Seoul and come back with the report.

After four appearances, the Boone character was dropped without explanation. 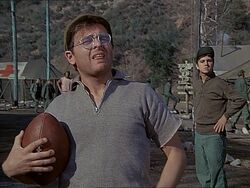 Boone is behind Radar in the teaser to the Pilot episode 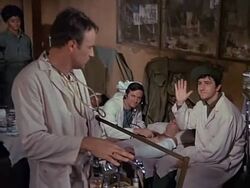 Bruno Kirby in a second scene in the Pilot episode, this time in Post Op 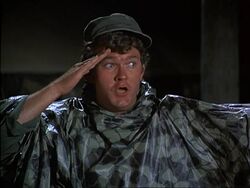 In "Chief Surgeon Who?" Robert Gooden as Boone directs General Barker to Henry Blake's tent. "Were you born in this position?" asks Barker. "Yes, sir- No, sir!" 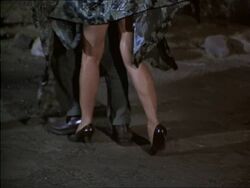 Boone creeps away from General Barker but he is not alone! Wonder who she is? 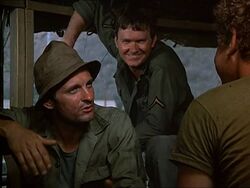 Boone in the plot to get rid of Frank Burns in 'Henry Please Come Home".
Community content is available under CC-BY-SA unless otherwise noted.
Advertisement