Smilin' Jack was the 94th episode of the CBS-TV series M*A*S*H, and, also the 22nd episode of the fourth season of the series. Written by Larry Gelbart and Simon Muntner, and directed by Charles S. Dubin, it first aired on February 3, 1976.

A chopper pilot with diabetes, dead set on bringing in the most wounded from the front to be the 'Chopper Pilot of the Year', continues flying against the docs' orders.

The 4077th gets a visit from Smilin' Jack (Robert Hogan), a hot-shot chopper pilot, who is working on attaining the record of Chopper Pilot of the Year, by bringing in the most wounded.

Jack visits Hawkeye in O.R., and then asks out a nurse. He then visits his old friend Col. Potter.

Potter and Jack talk about old times, and work out a trade for some supplies. Before Jack leaves, though, Potter notices an old scratch on Jack's hand that he says he patched up months ago. Jack dismisses it, and leaves.

Later that night, Jack is having drinks in the O Club with Hawkeye and B.J., and he's hustling them for drinks by pulling off a trick involving a hypodermic needle. The jovial mood is broken when Potter arrives, officially grounding Jack upon completion of a physical. Hawkeye and B.J. do the work up, and Jack seems in good shape, except he's unwilling to give them a urine sample. He's so hostile, the doctors bluntly ask him what Potter suspects. Jack fesses up - he's got diabetes.

Hawkeye and B.J. try and press upon Jack the risk he's taking being up in the air while having diabetes. Jack insists no one is grounding him - no one.

Later, Jack jumps in his chopper and heads to battalion aid, in an attempt to pick up four wounded soldiers at one time, therefore beating the record in what he knows will be his last chance.

Col. Potter tries to get him to land, but Jack won't listen. He does manage to bring four wounded back to the 4077th, setting the record. Jack is thrilled to have set the record,  and willingly hands his pilot's wings and insulin syringes to B.J., symbolically ending his flying career.

In a side plot, Radar befriends Corporal Owens, one of the soldiers brought in by Jack. Owens is afraid of returning to the front, having been wounded twice, but he feels better after Radar gives him his lucky four leaf clover. Radar tells him, "It's a bit squished. I had it in my pocket when a Jeep ran over me. But mostly it works, though."

Days later, Jack and Owens prepare to leave the 4077th for Seoul. Just as they leave, chopper pilot "Dangerous Dan" comes in with another load of wounded, thus taking back his record. Jack ruefully accepts his fate. 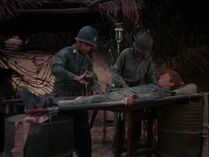 Owens given first aid at a battalion aid station before being airlifted out. Note the captains bars of the battalion surgeon. He is sprinkling sulfa powder over the wound. 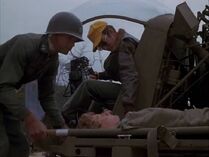 Owens being loaded onto Jack's chopper. This episode shows a lot of detail about how the wounded are loaded and secured onto a Sioux helicopter. 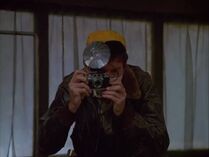 Jack with his camera in the O.R. The camera looks authentic for that era. What model of camera is that? 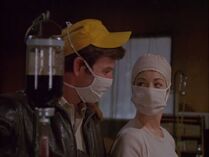 According to IMDb, Lieutenant Cathy King (uncredited) is played by Alba Francesca. The original source of this information is not known but she does look like Francesca. 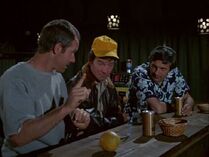 Jack teaches B.J. a trick with a syringe in the Officers Club. 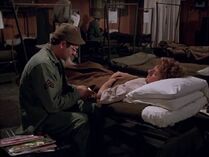 Radar hands Owens his lucky four leaf clover in order to reassure him. 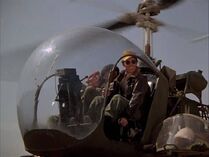 Jack overloads his helicopter. Note the two casualties inside his cabin. 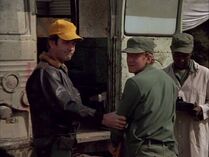 Jack and Owens depart the 4077th just as Dangerous Dan comes in with another load of wounded.
Add a photo to this gallery

(Hawkeye and Potter talk in the O.R.)

Retrieved from "https://mash.fandom.com/wiki/Smilin%27_Jack_(TV_series_episode)?oldid=23429"
Community content is available under CC-BY-SA unless otherwise noted.