Snap Judgement was the seventh episode of Season 10 of the CBS-TV series M*A*S*H, also the 226th overall series episode. Written by Paul Perlove, and directed by Hy Averback, it originally aired on December 7, 1981.

When Hawkeye's snappy new Polaroid camera is stolen, Klinger searches the black market and finds it. Unfortunately en route back to camp, Klinger is stopped by MPs who assume he is the camera thief.

Hawkeye and B.J. receive a gift from the grateful father of a patient of theirs - a brand new, super expensive Polaroid camera. As much as they appreciate the gift, they're worried its going to get stolen, since at the moment the 4077th is suffering from a crime wave of pilfering.

After a series of failed attempts to get the camera to work, it is, in fact, stolen during a session in OR. This enrages everyone, no one more than Colonel Potter, who nevertheless is confused as to what to do about it. Potter instructs Klinger to fill out a stolen goods report, but after a week or so when there's no news, Hawkeye and B.J. look into it. They are told by HQ that they never got the report Klinger filed - turns out he screwed up and sent them an empty envelope.

Hawkeye and B.J. are furious at Klinger for messing up, and now are convinced they'll never get the camera back, since the crook or crooks had has a week's head start.

Klinger, feeling guilty over his screw up, decides to do some investigating of his own: he goes to Rosie's Bar, and bribes Rosie to find out about any black marketeers in the area. Rosie tells him about "Little Chicago", a roving band of thieves selling stolen merchandise. Klinger secretly searches for and finds Little Chicago, and finds the stolen camera. He buys it back with his own money, driving back delighted he fixed his mistake. But he's stopped by some MPs, who think Klinger stole it.

Back at the 4077th, the MPs return the camera to Hawkeye and B.J., and tell them the culprit is Klinger. They laugh at this, insisting Klinger is innocent, but the MPs refuse to listen and go ahead with their case.

The Army's CID sends an investigator named Captain Triplett (Peter Jurasik) to the 4077th to see if there's strong enough evidence to put Klinger on trial. Everyone lays on the white wash to protect Klinger, so much so that Jurasik tells Hawkeye, B.J., and Potter over drinks that "No one's tried to insult my intelligence this badly since Basic Training. However, they are relieved when Triplett declares that there's no evidence he stole the camera. Unfortunately, Rosie arrives at the table and, unaware of who is in her presence at moment, she tells them to send a message to Klinger that CID is investigating stolen goods and that Klinger should wait to sell anything in Little Chicago. Triplett, hearing this, re-opens his investigation.

Triplett recommends a Special Court Martial and a trial is scheduled. Potter reveals to Klinger that a guilty verdict would likely mean a six-month prison sentence. Klinger tries to see the upside of being found guilty, thinking it would mean he'd at least be out of Korea, but Potter has even more bad news: the six months in the stockade would be spent doing "hard labor". Worse yet, Klinger would be dishonorably discharged losing all his veteran benefits, and on top of that, the criminal charge would permanently go on his civilian record for the rest of his life...

In the military, there are three levels of court martial: 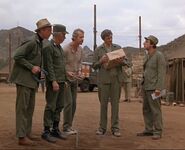 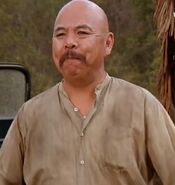 Add a photo to this gallery
Retrieved from "https://mash.fandom.com/wiki/Snap_Judgement_(TV_series_episode)?oldid=22831"
Community content is available under CC-BY-SA unless otherwise noted.