Springtime was the fifth episode of Season 3 of the CBS-TV series M*A*S*H, also the 54th overall series episode. Written by Linda Bloodworth and Mary Kay Place, and directed by Don Weis, it first aired on October 15, 1974.

When spring arrives, Klinger gets word from home that his sweetheart back in Toledo wants to marry him. Father Mulcahy (with help from Radar) arranges to do this over short wave radio. Radar falls in love with a nurse, while a grateful patient won't leave Hawkeye alone.

A genuine spring day is just the tonic to relieve the stress and fatigue of the O.R. Trapper wants to grab a couple nurses, a bottle of booze, and head into the hills, but Hawkeye would rather catch up on his sleep. Meanwhile, Radar is drawn to Lieutenant Louise Simmons (Mary Kay Place) who is taking advantage of the sunny spring day by sunbathing in front of her tent.

Frank & Margaret take to the countryside for a secluded picnic where Margaret is entertained by the flaring of Frank's nostrils. Lounging nearby reading poetry is Klinger, clad in his best Scarlett O’Hara frock. Radar delivers a letter to Klinger, informing him his girl back in Toledo, Laverne, has agreed to marry him.

Post-op contains a couple of characters. The first is a silent soldier who wandered in without dog tags and clutching a cat protectively. The second is a burly Marine (Alex Karras) named Lyle Wesson who was operated on by Hawkeye. Wesson, about 6′ 2″ and 250 pounds, pledges his gratitude to Hawkeye for saving his life and takes to following him around camp like a personal valet. Hawkeye and Trapper arrive at a packed mess tent for lunch, causing the hulking Wesson to “suggest” Goldman and Troy give up their seats and to “order” two trays of food from Igor for the captains to eat.

Radar has been getting nowhere with Lt. Simmons, so he turns to Hawkeye and Trapper for romance advice. Radar admits he is ignoring Simmons because she has been ignoring him, so Hawkeye makes the simple suggestion he ask her to the movie that night.

Henry, who earlier turned down Klinger's request to return to Toledo for the wedding, instead arranges for the corporal to marry Laverne over the radio by utilizing a ham radio operator in Iowa. After Henry explains the whole procedure to him, Klinger wonders if it wouldn't be easier for him to go home for the ceremony.

Radar approaches Simmons, who is hanging laundry outside her tent. He brings up tonight's movie (“Firstborn of Godzilla”) but she is not the movie type, preferring quiet evenings of listening to music and reading poetry.

The mute soldier with the cat is still occupying a bed in post-op. Frank threatens the soldier and gives him to the count of five to relinquish the cat, but Hawkeye steps in and attempts a more humane approach. Hawkeye talks the young man into giving him the cat, but then the soldier puts Hawkeye in a headlock. Fortunately, Wesson shows up and frees Hawkeye, who states they are now even, but Wesson won't hear of it.

Radar shows up at Simmons's tent armed with chocolate and Klinger's book of poetry. Simmons invites him in to read a poem, and as he starts reading, Simmons can't help but throw herself at him--literally.

In Henry's office, Father Mulcahy conducts the marriage ceremony for Klinger and Laverne over the radio and Klinger is decked out in a white wedding dress. Hawkeye and Trapper arrive for the festivities dressed to the nines and offer a wedding cake as a gift. As the radio communication is interrupted, Frank and Margaret barge in, demanding the marriage ceremony be ended or else they'll file a report. Wesson then enters, and when Frank insults Hawkeye, he twirls the Major over his head until he agrees to apologize and scrap the report. Radio reception is restored, Klinger and Laverne are married, and Radar trudges in, clothing askew and lipstick marks all over his face, claiming he was slaked. (Most syndicated airings cut this scene off at Laverne saying "I do.", then return from commercial at the part where the confetti is thrown and Radar walks in.)

In the rarely-viewed "epilogue" scene, it's pouring rain that night as the doctors enjoy a martini and the lull in fighting. Radar comes over asking if they have any poetry books, and the captains take to teasing Radar about his recent romantic encounter. 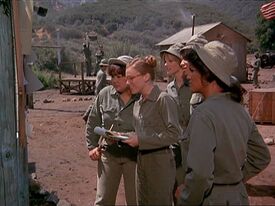 Nurses at the bulletin board studying the volleyball fixtures. Besides Simmons, there is Kellye and Gwen. Two unknowns are behind Simmons. 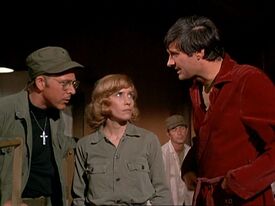 Patricia Stevens has a few lines as she tells Hawkeye about the soldier with the cat, but she was not credited. 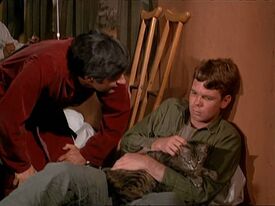 This is the unnamed soldier played by Greg Mabrey who doesn't talk throughout the episode. The end credits list him as "Pasco". But how did Mulcahy and Stevens know the cat is named "Fluffy"? 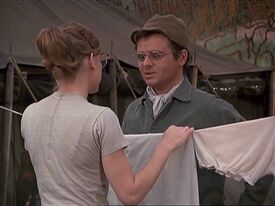 Radar with his paratrooper scarf trying to chat up Nurse Simmons. 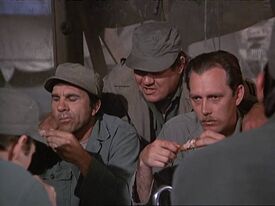 Goldman on the left, Dennis Troy to the right. Lyle is "persuading" them to give up their seats for Hawkeye and Trapper. 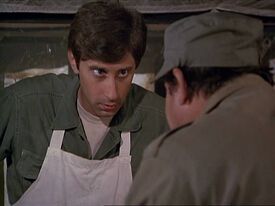 Jeff Maxwell is billed as "server" in this episode. Lyle wants "two of everything" for Hawkeye and Trapper. 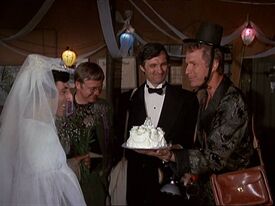 Hawkeye and Trapper get dressed up for Klinger's wedding.
Community content is available under CC-BY-SA unless otherwise noted.
Advertisement