That's Show Biz was an hour long story-arc written by David Pollock and Elias Davis and directed by Charles S. Dubin. Originally produced during Season 9, it was held over for broadcast as part of Season 10, first airing on October 26, 1981 as the Season 10 opener. Its initial network broadcast was an hour-long episode, but in syndication it was divided into two parts.

A traveling USO show brings an unexpected touch of vaudeville to the 4077th when the star showgirl requires an emergency operation.

A USO troupe gets caught in the middle of an artillery barrage, and one of the performers, a young singer named Marina Ryan comes down with an inflamed appendix. She's taken by chopper to the 4077th, where Hawkeye literally sweeps her off her feet, carrying her to a jeep.

The rest of the troupe follows Marina to camp: a comedian named "Fast Freddie" Nichols, musicians Sarah Miller and Ellie Carlyle, and exotic dancer Brandy Doyle. They ask if they can stick around and do a show, though Freddie is anxious to stay on schedule. But, after some cajoling, Freddie finally relents, and they put on a show for the wounded in Post Op. After the show, the troupe prepares to leave, but word comes down that all the roads are closed off due to heavy artillery nearby, and so the troupe is "held over" at the 4077th. Everyone is happy at the news except for Hawkeye and B.J., who are driven out of the Swamp in the middle of the night, unable to sleep due to the hysterical cackling of Charles and Klinger at Fast Freddie's jokes.

The travel restrictions are finally lifted, and Hawkeye tells Marina that she's well enough to leave with them, but she protests, insisting that she can stay behind so she and Hawkeye can get closer. But Hawkeye gently declines, saying they're simply too different to have a relationship. Marina unhappily accepts this, and tearfully promises to send him a postcard on New Year's Eve. The troupe packs up and departs, singing and waving goodbyes as their truck makes its way down the road.

Later that evening, everyone is a little down now that the entertainers have left; Potter compares it to the feeling he gets right after the circus leaves town. Hawkeye and B.J. are relieved that they don't have to listen to any more of Fast Freddie's jokes, which is why they barred Klinger from entering the Swamp. But when he says he has given up comedy and promises no more jokes, Hawkeye reluctantly lets Klinger inside, and he promptly shows off his new passion: playing the accordion!

The Music in the episode[]

At the start of the second episode (or second half of the episode), Freddie complains to Potter that the troupe may not make it to a gig in Hoboken, NJ if they have to stay at the MASH longer than expected. He tells the Colonel that he hopes it would be a step closer to getting on Toast of the Town, which was the original name for The Ed Sullivan Show. Potter doesn't seem to know who Sullivan is, which is odd, considering his landmark variety show began in 1948, two years before the Korean War began.

Also in the second half, Father Mulcahy calls the chaplain of the 8063rd, trying to help Sarah find her brother's keepsake ballet slippers. He calls him by his first name, "Charlie". One can't help but notice the joke, intentional or not - Charlie, the chaplain (Charlie Chaplin). 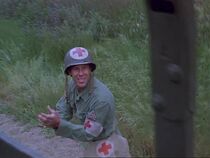 This medic is not credited but he has a few lines as he tends to Marina after the mortar attack. 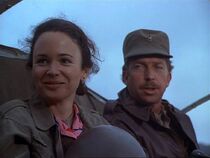 Marina arrives at the MASH. The pilot with her has a brief speaking part but he is not credited either. He is wearing the insignia of a Warrant Officer (j.g.). 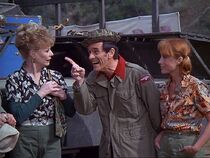 From left to right, Brandy, Freddie and Ellie also arrive at the MASH. Sarah has just stepped out of the camera view. 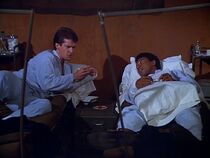 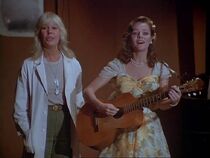 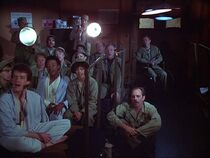 The audience in post-op during the rendition of "Sweet Molly Malone". Note the stage lights. Below the light on the left is Jo Ann Thompson. Shari Saba is below the light to the right. Even Winchester (next to Shari) is singing. 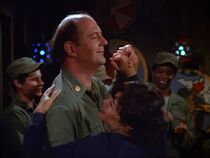 Ellie's virtuosity with the piano inspires Winchester to dance with Kellye during her rendition of "Beer Barrel Polka." 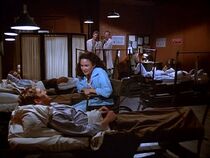 Marina attempts to cheer Private Nowicki who has refused to say a word to anyone else. She will break the ice, but not initially. 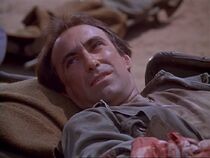 This G.I. is uncredited but has quite a few lines. He has just passed Hawkeye the pair of ballet shoes Sarah is looking for. For some reason, the 8063rd MASH has passed them to his battalion aid station for him to bring over.