The Chosen People was the 19th episode of the 2nd season of the CBS-TV series M*A*S*H series; it was co-written by Laurence Marks, Larry Gelbart, and Sheldon Keller from an original story by Keller and Gerry Renert. Directed by Jackie Cooper, the episode originally aired on January 26, 1974.

A Korean family sets up home in the compound, while a Korean woman shows up with a baby she insists is Radar's. This surprises everyone, not least the man himself.

Captain Pak (Pat Morita) is back at the 4077th, though not to play poker. This time, he is a medical observer in O.R. and provides some humorous Korean translations for the doctors.

The arrival of a Korean family in camp is heralded by their ox popping into Henry's tent for a quick hello. The family patriarch (Jerry Fujikawa) starts building a shelter in the middle of the compound. Unable to communicate with them, Captain Pak is called in for translating. Pak tells Henry the Korean man said this is his property and he intends to farm it.

As Henry calls Civilian Affairs for assistance, he is visited in his office by a young Korean woman named Choon Hi and she is not alone. She has an infant son in her arms and claims the baby's father is “G.I. Joe” which prompts Henry to say “Well, I’m afraid we don’t have anybody by that name here, Miss.” Choon Hi says the father is a doctor in camp who speaks like the “wind song”, making Henry think Trapper or Hawkeye is responsible.

Henry gets more bad news when Pak tells him he had a long talk with the Korean family and they are giving the unit three days to get off their land. Hawkeye, Trapper, Frank, and Radar all make their way to Henry's office and Choon Hi points out Radar as the father of her baby boy. All are naturally stunned as Radar admits he knows Choon Hi since he is a frequent visitor to her village, but says he is not the father and there must be a mix-up. Radar doesn't seem absolute in his profession of innocence, so the doctors are slightly skeptical, but Frank, of all people, has the bright idea of checking the baby's blood and the mother's against Radar's type, which earns him a round of applause.

The Korean family has now set up an entire homestead in the compound complete with shelter, cooking and laundry facilities, and the father is sowing seed. Lieutenant Harper from the Judge Advocate General's office arrives to investigate the pregnancy claim filed by Choon Hi while Frank speaks on the phone to a Major from Civilian Affairs about displacing the Koreans, but ends up getting an unwanted proposition.

The blood tests come back, revealing that Choon Hi, the baby, and Radar have blood type A, B, and O respectively, meaning Radar is not the father of the child. Radar, unaware of this recent development, tries to claim the baby as his, telling Henry, Hawkeye, and Trapper that he was "somebody different" that night, wearing his paratrooper scarf with "nothing on underneath" and was "looking for trouble" after two beers. However, the blood tests disprove his claim, and Choon Hi admits the baby's father is an unknown American G.I. and now she is ostracized from her family with no place to go. A truck from Civilian Affairs arrives to take the Korean family to a village south of camp, and Choon Hi and her son depart with their newly adoptive family. As the camp watches them leave, Radar admits to Hawkeye that he is insecure about being a virgin and he liked that for a short time, everyone thought he wasn't. Hawkeye assures him that sometime that will change, and on their way back inside, Lieutenant Lyons asks Radar if she wants to be his date to the camp's movie night. Trapper and Hawkeye suggest he wear his paratrooper scarf, since "it worked before".

When Radar had to have a blood test to establish paternity for Su Yong, in which he didn't match, it was the only means to tell paternity, until the advent of DNA testing which didn't start until the mid-1980s. 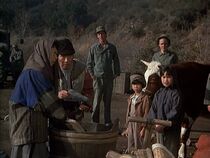 the Korean family. Jerry Fujikawa (2nd from left) as the father. The mother is not credited. Looks like Sheila Lauritsen in the background. 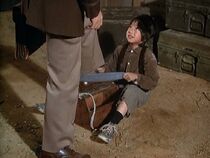 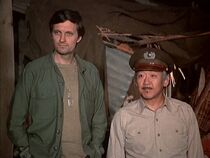 Captain Sam Pak with Hawkeye. Notice Pak's cap badge with the Korean "taeguek" symbol on it. Compare with Charlie Lee's in "To Market, To Market". 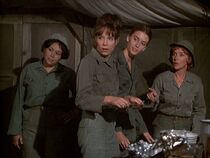 Nurses in the mess tent are surprised to see Radar bringing in Choon Hi and the baby. There is Kellye Nakahara, Bobbie Mitchell, possibly Kathy Denny Fradella. Cannot identify the one on the right. 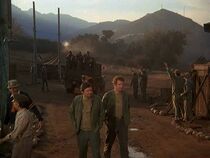 The Korean family leave on a truck. Interestingly the sign on the tent to the right says "Nurses Shower" - not commonly seen.
Add a photo to this gallery
Retrieved from "https://mash.fandom.com/wiki/The_Chosen_People_(TV_series_episode)?oldid=23377"
Community content is available under CC-BY-SA unless otherwise noted.