The Consultant was the 17th episode of Season 3 of the CBS-TV series M*A*S*H, also the 65th overall series episode. Written by Robert Klane, with a story by Larry Gelbart and directed by Gene Reynolds, it first aired on January 21, 1975.

Dr. Borelli visits to demonstrate his artery transplant technique. Unfortunately, being so close to the front at the 4077th causes Borelli's drinking problem to interfere at the worst time - when a patient needs the transplant.

Hawkeye and Trapper are off to Tokyo for a medical conference, but golf and geisha take a higher priority. On the Ginza, they meet Major Anthony Borelli (Robert Alda), a civilian medical consultant with an honorary rank. Borelli is attending the conference and chides the captains when he learns they'll be skipping the lectures to chase girls. Hawkeye and Trapper explain they work at a M*A*S*H unit where technique takes a back seat to speed of service. Borelli, who has never been to Korea, is invited to the 4077th by Hawkeye and skip the “cozy locker room” of Tokyo. Borelli declines, citing his experience with the front lines of World Wars One and Two.

Back at camp, Henry is relaxing in a makeshift swimming pool and is joined by Hawkeye and Trapper who proudly admit they skipped the conference. A lone chopper arrives, producing Major Borelli, who obviously changed his mind. Borelli bunks in the Swamp and Hawkeye and Trapper are genuinely happy he's chosen to witness the real action of the war. Wounded arrive and Borelli, not exactly comfortable with front-line conditions, watches the doctors in action. Frank is about to amputate a leg with serious arterial damage, but Borelli steps in and claims the leg can be saved with an artery transplant.

Radar tracks down an artery for grafting at a British unit sixteen miles away, so Hawkeye and Trapper go pick it up. Dr. Borelli is paged to perform the surgery, which the medical staff is eager to witness, but he remains holed up in the Swamp. Irritated by the senseless delay, Hawkeye confronts him and learns Borelli is too “soused” to operate. Borelli tells Hawkeye he is good enough to perform the operation and he'll help guide him through it.

A large crowd watches Hawkeye successfully perform the arterial transplant under Borelli's direction, but Hawkeye gives the Major the cold shoulder, still incensed the doctor would be too drunk to operate. The two men meet up afterwards in the Swamp, where Hawkeye chastises Borelli for excessive drinking. Borelli admits the carnage of war got to him, but gently reminds the Captain that he is the one with a still in his tent and wishes him luck on his third war.

In a final scene not normally shown in syndication, Borelli departs via chopper, saying goodbye to Henry, Frank, Margaret, and Trapper. Hawkeye is absent, but shows up at the last second and literally tips his hat to Borelli, effectively burying the hatchet with the man he realizes he could soon become. 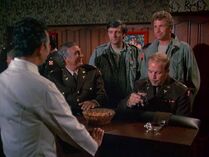 Hawkeye and Trapper meet Borelli in Tokyo. Tad Horino has a credit as the bartender in the foreground who doesn't get much of a speaking role. 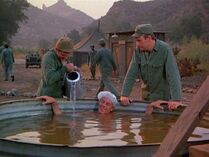 Henry in a makeshift pool in the camp compound. 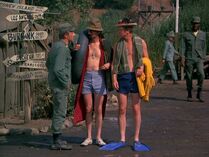 Hawkeye and Trapper, back fron Tokyo, decide to join Henry in the pool. Frank is not amused. 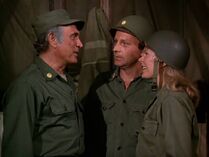 Frank and Margaret meet Borelli after his arrival at the 4077th. Not often do we see Margaret in a helmet, especially in camp. 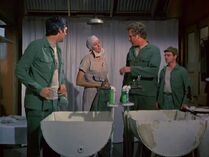 This is the unidentified nurse who has a small speaking role talking to Trapper in the scrub room. See Unidentified Nurses. 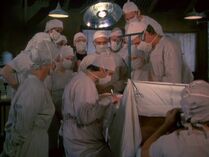 Surgery scenes are great for identifying people, but only if you have a good eye for eyebrows. Margaret is assisting Trapper. In the foreground, Kellye is the anesthetist. 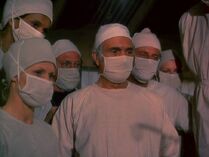 A close up view of Borelli and others watching the arterial graft operation. The nurse to the left of Borelli looks very familiar. Trapper's mystery nurse could be the one at the back, right of Henry. 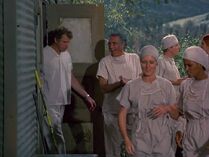 The nurse with Gwen Farrell looks like Trapper's date. Who is she? 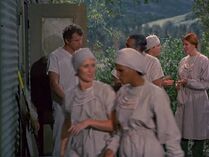 The red headed nurse in the background talking to the corpsman is Lt. Peters, played by Mary Peters. In other episodes, she's usually seen dancing with Radar (for comedic effect, seeing as she's so tall).
Community content is available under CC-BY-SA unless otherwise noted.
Advertisement