The General's Practitioner was the 118th episode of M*A*S*H, the 21st in Season 5 of the show, which originally aired on CBS-TV on February 15, 1977. It was both written by Burt Prelutsky and directed by Alan Rafkin.

Hawkeye is not at all excited when a visiting general decides he wants him to be his new personal physician. Radar becomes a surrogate father for a soldier's half-Korean baby after he is shipped back home.

During an OR session, a Colonel Bidwell arrives demanding to see Potter; he tells him that he is looking for a private doctor for his commander, one Lt. General Theodore Korshak, and he wants the best doctor the 4077th has got, namely Hawkeye. Potter tries to dissuade Bidwell, trying to get across just how un-military Hawkeye is. But Bidwell refuses to listen and asks to watch Hawkeye at work.

In OR, Hawkeye nearly loses a patient, but he frenetically performs CPR on the patient screaming, "Don't let the bastard win!" (referring to Death, according to Potter), and almost by sheer force of will, Hawkeye brings the patient back to life. But when Bidwell gets too close for Hawkeye's comfort, he barks at him to "move it or get it amputated!". Potter and Bidwell walk out to Bidwell's jeep, where Potter reiterates what a bad mix Hawkeye and Korshak would be. Bidwell says he'll mention that in his report, and drives off.

Later that night, Potter joins Hawkeye and B.J. for drinks in the Swamp, and explains to Hawkeye the reason for Bidwell's visit to camp, adding that when Korshak found out that another Lieutenant General had gotten himself a personal doctor, Korshak decided he wanted one of his own for image and prestige. The next day, Bidwell is in a jeep with General Korshak, on their way to the 4077th.

Korshak arrives, makes his way to Potter's office (who for some reason is already slightly soused), and they have a drink. Korshak then demands to see his new personal physician. Hawkeye arrives, but gives only facetious answers to Korshak's questions, but rather than be riled, Korshak is actually charmed by Hawkeye's frivolity.

Things get more serious when Korshak formally says he wants Hawkeye as his doctor, but Hawkeye refuses, saying he is not interested in being Korshak's "court jester" while there are wounded kids he can save if he stays at the 4077th. Korshak shows Hawkeye his rank on his collar, which he got through hard work and "not taking 'no' for an answer", but Hawkeye counters by showing Korshak his own empty collar, where his caduceus (medical insignia) should be; Korshak correctly guesses that Hawkeye got his caduceus from hard work as well, and Hawkeye argues that if he has to be in Korea, then he should do the work he was trained for.

Korshak then asks to see Hawkeye at work, so Hawkeye gives the General a physical and finds out that he is at least ten pounds overweight and has high blood pressure, but even with this news Korshak refuses to give up his cigars and booze. Hawkeye then tells Korshak that he will agree to be his personal physician, but only if he is allowed to return to the 4077th after his funeral; Hawkeye warns the general that "the stroke that's headed your way is a lulu", saying that it can happen at any time, which Korshak refuses to accept. Hawkeye tells him he has two ways he can avoid it: either check in to a Tokyo hospital and start taking care of himself, or "sit on a land mine".

Korshak still refuses to listen and says Hawkeye will get his reassignment orders in a few days. Hawkeye chides Korshak on how lucky he is to has a choice, while most of the other guys who come through camp do not. Korshak begins to drive off, but Hawkeye reminds him of the soldiers that he can save if he remains there in camp, and asks him whether or not the soldiers do come first as Army brass always says. Admitting that they do indeed come first, Korshak finally changes his mind and agrees to cancel the whole thing. He drives off, leaving Hawkeye to stay and do his job.

Later, Frank asks Potter to recommend him for the job of Korshak's personal doctor. Potter agrees, and starts writing down the various bursts of salacious material Hawkeye and B.J. offer up, leading Frank to protest getting what he asked for.

A friend of Radar's, Corporal Mulligan, has earned his rotation points and is heading home to Wyoming. When he asks Radar to take care of his Korean girlfriend Mai Ping, Radar is nervous about it but agrees to do it, and is even more shocked when he finds out that Mai Ping has an infant son, named Li Chin, who was fathered by Mulligan.

He gets B.J. to come and give Li a physical, and during the walk to the hut tries to get some answers and advice about what to do and how to help Li and Mai. Radar confides in B.J. that he worries about the boy, about how he's going to get along in his war-torn home. B.J. compliments him on being a "good father", and then, after his physical, gives Li Chin a clean bill of health.

Just as Radar's fondness for Li (and for Mai) begins to grow, Mulligan makes a surprise return, telling Mai that he was almost on the plane heading stateside when he realized he loved Mai and Li too much to leave them behind, so he came back to get the two and take them with him to Wyoming. Inwardly, Radar is heartbroken, but as he is about to leave he intentionally and wordlessly leaves his teddy bear behind for Li, but as he is walking out, Mai returns it to Radar in gratitude for what he did for them. 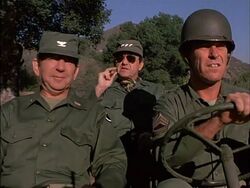 Korshak and Bidwell on the way to the 4077th. Note the Master Sergeant driver (uncredited). 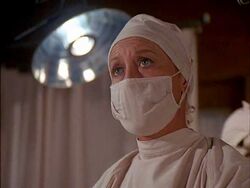 This unnamed and uncredited nurse in a demanding surgical scene has some lines and looks older than the other extras who play nurses. She is also given quite an extensive close up shot. It is speculated that she might be Connie Izay. 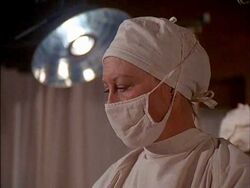 Here is another view of the same nurse, from the side. A close-up is not given to anyone else in this scene. 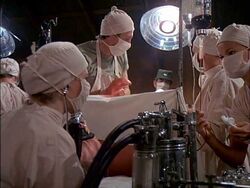 Hawkeye calls to "Amanda" to bring adrenaline. This is the best view of her. She is the one on the extreme right inserting the adrenaline into the IV. The anaesthetist in the foreground is Margaret. 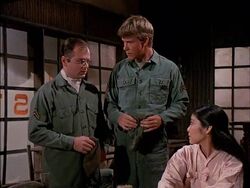 Mulligan introduces Radar to Mai Ping. Radar has taken off his wool cap for her, as gentlemen do when meeting a lady. Note that he is also wearing his paratrooper scarf as he frequently does when meeting girls. 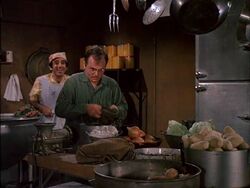 Radar in the kitchen with Klinger. It seems like there is no shortage of fresh vegetables in the camp, so why do they always complain about the food?