The Gun was the 86th episode of the CBS-TV series M*A*S*H, and, also the 14th episode of the fourth season of the series. Written by Larry Gelbart and Gene Reynolds, and directed by Burt Metcalfe, it first aired on December 2, 1975.

Frank sinks to a new low when he steals a wounded colonel's vintage Colt 45 revolver from the camp's gun locker, and then allows Radar to stand accused.

Wounded arrive at the 4077th, including a Colonel Chaffey (Warren Stevens), who is armed with a rare, antique pistol as a side-arm. As standard procedure, Radar takes it and locks it up in the gun bin, but not before Frank takes a few moments to drool all over it, in a display of machismo.

Later, when Radar returns to the gun bin, he sees that Chaffey's gun is gone, so he tells Potter, who starts an investigation to find it; if it remains missing, Radar could go to the stockade for 15 years. Radar is paralyzed with fear: "I won't get out until I'm thirty - that's almost dead!" The gun fails to turn up, and Potter has to break the bad news to Chaffey who, as expected, furiously demands Radar be brought up on charges.  Meanwhile, Frank shows Margaret an antique gun that he got from home. He asked to have it sent to him because he "missed my old pal".

Though they can't prove it, Hawkeye and B.J. are convinced that Frank was the one who stole the gun and confront him in the OR, but Frank refuses to give an inch and states that everyone is entitled to be innocent until proven guilty, pointing out that Radar deserves the same consideration. Hawkeye and B.J., annoyed that Frank is actually right for once, back down.

Certain that his guilt has already been presumed, Radar gets drunk, and in the middle of the night goes to see Chaffey to protest his innocence. While there, they both hear a gun go off, causing everyone to run outside. In the confusion, Frank stealthily makes his way to Margaret's tent, with a gun shot wound to his foot. He initially tries to tell a tall tale about getting into a fight with someone he saw lurking in the Supply Shed, but Margaret coerces the truth out of him, that the gun isn't and never was his, and while he tried to return it, it went off. Margaret is furious at Frank for stealing the gun and then lying about it, and Frank has learned his lesson: "When you steal something, don't ever try to return it".

With the gun now returned, all of the charges against Radar are dropped. Chaffey apologizes to Radar, and Potter, realizing that the gun is more trouble than it's worth, suggests that Chaffey should donate it to a museum, but Chaffey refuses to listen, insisting on keeping it until he dies, and rides off.

The next day, Hawkeye and B.J. see Frank limping - he claims it's an old football injury, but they hint that they know the true source of the wound. How did they know? Just a guess, really - a "shot in the dark."

The Gun is the first episode of Season 4 to air on Tuesday night (9:00 pm ET), as CBS returned M*A*S*H to its formerly-solid Tuesday night lineup. At the beginning of Season 4, CBS punished M*A*S*H for its season 3 shock finale Abyssinia, Henry by moving it to Friday night (first at 8pm, then at 8:30pm ET); this maneuver caused the show to fall to #15 in the Nielsen ratings as it was pitted against NBC's strong Friday night lineup of Sanford & Son followed by Chico and the Man. After it was moved back to Tuesday nights, M*A*S*H returned to the Top 10 and remained there for the rest of its run-- even after permanently moving to Monday nights during Season 6. 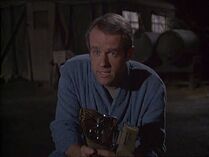 First good view of Colonel Chaffey's gun - B.J. lifts it off him during triage. 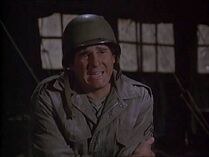 This soldier has a lot of lines as he describes how he, Colonel Chaffey and the others in the jeep were injured when an American tank ran them off the road. Strangely, he goes uncredited and we don't know who he is. 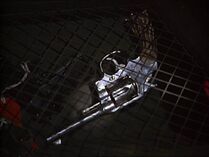 A close up of the gun in the gun bin, which allows us to identify it as a Colt New Service, 1898. 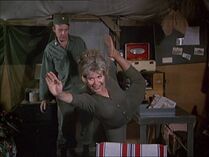 Margaret doing yoga. Her body suit is olive green and she is a stickler for regulations. Wonder if the body suit is official army issue. 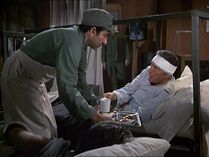 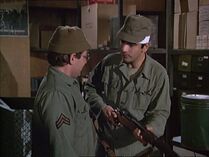 This soldier gets a line or two but is uncredited. 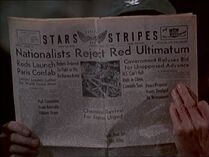 Colonel Potter holds up his copy of Stars and Stripes, allowing us to identify it as the Pacific edition 20 April 1949. Either anachronistic or they are just being like any doctor's waiting room. 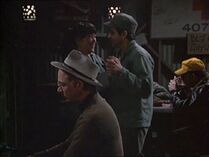 Lieutenant Smilin' Jack Mitchell or someone wearing his characteristic flight jacket and yellow cap. He is in the background is this scene in the Officers Club.
Community content is available under CC-BY-SA unless otherwise noted.
Advertisement