The Incubator was the 12th episode of Season 2 of the TV series M*A*S*H, also the 36th overall episode of the series. Written by Larry Gelbart and Lawrence Marks, and directed by Terry Becker, it originally aired on CBS-TV on December 1, 1973.

Hawkeye and Trapper decide they need an incubator to aid their medical work, and fight the army red tape to get one.

Hawkeye and Trapper are frequently stymied in treating patients by the 4077th's lack of an incubator. They lose valuable time sending samples all the way to Tokyo, so they set out to see if they can get one.

They go to Colonel Henry Blake who proudly shows off a new barbecue grill from the Army Quartermaster. Henry arranges a meeting with Captain Sloan, an officer from the Quartermaster Corps. Sloan refers to his manual and then tells them they can't have one - it would be considered a luxury. But they could have a pizza oven! Henry gets all excited about the pizza oven, but Hawkeye and Trapper leave Henry's office disgusted at the supply Captain "who won't tie his shoe without a direct order."

Later Radar tells them he had located an incubator, in fact, three of them, at the 728th Evac Hospital in Pusan. Delighted, Hawkeye and Trapper go to Pusan to see Major Arnold Morris (Ted Gehring) at the 728th. But Morris has to have everything in triplicate and refuses to give any of them up, in the fear one might break, and as he says to them "then I'd only have two!".

Hawkeye and Trapper go next to Colonel Lambert, the 728th Evac Hospital commander. Lambert agrees they can have an incubator, or even a B-52 bomber, but for a price. After all, he is sending Korea to Switzerland "one dollar at a time". Lambert doesn't even stay on the base - he has two houses, one blonde, one brunette.

Hawkeye and Trapper then move on up the chain of command to see General Mitchell. They crash a press conference he is chairing to ask him tough questions about why MASH hospitals are not given incubators. Naturally, being a press conference, the last thing Mitchell wants to do is give answers. The press conference descends into chaos when Hawkeye yells "Give me a incubator or give me death." and calls the General a "NINCOMPAC".

Back at the 4077th, Henry tells Hawkeye and Trapper that Mitchell wants the two of then arrested, but Henry cannot afford to because there are wounded to be attended to. Leaving Henry's office, Radar shows them his proud acquisition: an incubator! It turns out he got it by trading the barbecue that Henry got. 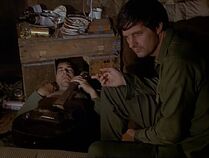 Hawkeye doesn't recognise this guest after a wild party in the Swamp.. Trapper tells him it is "Dr. Klein, Eye, ear, nose and guitar." 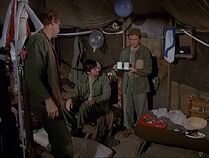 Radar brings in coffee in the aftermath of the party. Dr. Klein is still behind and below Hawkeye. 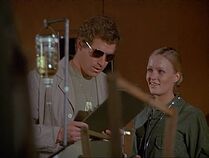 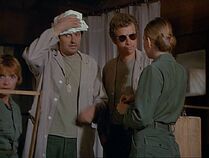 On the extreme left, uncredited appearance by Patricia Stevens, probably her first - she has just passed Hawkeye an ice pad. She will shortly walk across the camera foreground but most of this will be blurred as she moves fast. 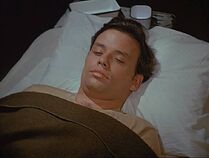 Uncredited patient referred to as Rizzo. He develops a fever and therefore needs a blood culture, which can be done much more quickly if the MASH has an incubator. 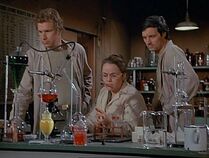 Nice view of the lab with Nurse Owens.
Add a photo to this gallery

Retrieved from "https://mash.fandom.com/wiki/The_Incubator_(TV_series_episode)?oldid=20437"
Community content is available under CC-BY-SA unless otherwise noted.