The More I See You (TV series episode)

The More I See You

The More I See You

The More I See You was the 95th episode of the CBS-TV series M*A*S*H, and, also the 23rd episode of the fourth season of the series. Written by series co-creators Larry Gelbart and Gene Reynolds, who also directed the episode, it first aired on February 10, 1976.

A nurse that Hawkeye had a common law marriage with and never got over arrives at the 4077th. And Hawkeye's heartbreak is only intensified when he learns that she is now married.

It's a boring day at the 4077th. Hawkeye and B.J. are so bored they are sitting around, basically talking nonsense to one another.

But things start to look up, when they see a jeep arrive carrying two new nurses. Hawkeye and B.J. watch from the Swamp, and then Hawkeye is stunned - one of them is an old flame, Carlye Breslin. More than an old flame, actually - Hawkeye reveals to B.J. that he and Carlye were deeply in love, lived together for over a year, and then it "busted up", as Hawkeye says, trying to sound casual.

Later, they go to visit the nurses in their tent, bringing gifts as a way to say welcome. Carlye (Blythe Danner) is just as stunned to see Hawkeye, but they both pretend they've never met. But little things slip through - Carlye already knows where Hawkeye's nickname comes from, and even finishes a joke Hawkeye tells, as if she's heard it before.

They invite them to drinks after dinner, and later that night Carlye comes to visit Hawkeye, who is alone in the Swamp.

At first Hawkeye is guarded and defensive, but soon he drops the facade and they talk, openly, about the old days. Hawkeye is mad Carlye - now Carlye Walton - is married (to an ad man named Doug). Carlye is having none of it, reminding Hawkeye that he was always married to medicine first, and that's what busted them up in the first place.

The conversation turns into an argument, and Hawkeye admits "There's been no one since you - faint copies at best." They resolve to try to work together, despite their history. Carlye leaves, leaving Hawkeye to grimace and mutter, dismissively, "Doug."

Later, Hawkeye and Carlye work together in surgery, but Hawkeye is snappish and mean, unable to stay professional. He suggests they talk again, after work.

They meet up in a small hut with a dirt floor away from the camp. They have some drinks, talk some more, and Hawkeye reveals how devastated he was when she left him. Eventually, though, they are embracing another. Hawkeye kisses Carlye, promising things will be better this time. Carlye is hesitant, but eventually responds.

A few days pass, and while filing some paperwork in Radar's office, Hawkeye and B.J. (who is waiting for a long distance call to Peg to go through) talk, with Hawkeye sort of apologizing for not being around much lately.

This becomes a discussion of Hawkeye having an affair with a married woman, and Hawkeye asks if B.J. has ever been unfaithful. B.J. says no, but he's gentle and unjudgemental with Hawkeye in explaining that the reason he hasn't cheated on Peg isn't because "God will send me to Hell without an electric fan, or it's not the right thing to do... I simply don't want to."

Radar finds Hawkeye and shows him that Carlye has put in for an immediate transfer. Hawkeye heads to Carlye's tent, demanding an explanation. She says she can't continue on this path, and will tell Potter the truth so she can be transferred immediately.

Hawkeye tries to get to her to stay, even feebly offering to propose to Caryle. Carlye isn't buying it, and points out to Hawkeye how shaky his commitment really is, and that his first love will always be - and should be - medicine.

Hawkeye accepts this, and they embrace one last time. Hawkeye makes a final, half-hearted joke, and leaves.

Later, Hawkeye and B.J. are back to being bored again. Eventually, though, the talk comes back to Carlye. Hawkeye says he doesn't mind that she's gone again, it's just that "she never altogether leaves." 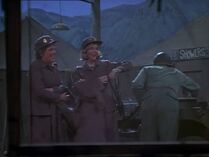 Nurses Carlye and Becky arrive at the 4077th, as observed through the mosquito net of the Swamp. They are wearing the taupe service uniform. 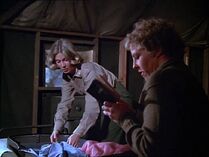 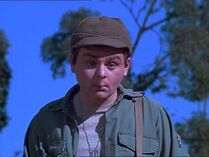 A small side plot has to do with Potter's painting hobby. Here Radar does an imitation of a turtle while posing for Potter. 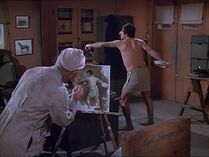