The Trial of Henry Blake

The Trial of Henry Blake

The Trial of Henry Blake was the eighth episode of Season 2 of the TV series M*A*S*H, also the 32nd overall episode of the series. Written by McLean Stevenson and directed by Don Weis, it originally aired on CBS-TV on November 3, 1973.

Henry is put on the spot as Frank and Margaret file formal charges of treason against him.

Henry and Radar, in their dress uniforms, leave on a trip to HQ, but don't say why. Meanwhile, Frank is walking around with a nasty grin on his face, and when Hawkeye and Trapper mouth off to him, he warns them that he might soon be in charge, so they better knock it off.

At HQ, Henry is facing a hearing led by General Mitchell as to whether or not he should be court-martialed, after formal charges were filed by Frank and Margaret. Examples of Henry's alleged lack of leadership are read out, including:

And most serious of all:

Henry doesn't deny these events, but says it doesn't mean the 4077th isn't doing its duty. Mitchell is unimpressed, and places Henry under arrest. He tells Henry that he should have Radar head back to camp to collect material to defend Henry against the treason charge.

Back in camp, Radar tells Hawkeye and Trapper what's happened. They plan to prepare a defense, but Frank and Margaret have them placed under house arrest in a gutted Swamp wearing only their skivvies. When Klinger brings in their meals, Trapper gives Klinger a note to drug the MP guarding them, which he does successfully, allowing Hawkeye, Radar and Trapper steal a jeep, and race to HQ before it's too late; when they find out what happened, Frank and Margaret pursue them in another jeep.

Henry is accused of faking requisitions and then channeling supplies to Meg Cratty, an American nurse who lives and operates a clinic inside North Korea; again, Henry does not deny the charges, and Mitchell tells him that given his admission he has no choice but to recommend court-martial. Henry simply offers, "I was just trying to help".

Just then, Hawkeye, Trapper, and Radar barge in to the hearing along with Meg Cratty, who brought along a young pregnant woman who is alive because of Henry's charity. Meg gives a forceful speech to Mitchell and the others, saying that she doesn't ask anyone's politics when they come to her clinic for help. She then says that Henry is the only one who was willing to help her, calling him "a caring, decent man, which is more than I can say about any of you high-priced bellhops." Hearing Meg's testimony, Henry is empowered to speak up for himself, claiming that his actions improved the life expectancy of the infants in the region, he was never paid under the table, and never deprived the wounded GI's of anything. He then says he is only guilty of trying to do what's right and help people in need, and that they could "hang my butt from a flagpole."

As Mitchell quietly discusses the new evidence and testimony with the other officers on the panel, Frank and Margaret arrive claiming to Mitchell that Hawkeye and Trapper are AWOL, and prime examples of Henry's incompetence; Henry counters that he "never set out to be a junior General MacArthur", but was only trying to run a hospital. With Meg's testimony and evidence now on the record, Mitchell is ready to drop the charges against Henry, but Frank has to agree to it. Frank naturally refuses, until Hawkeye somehow takes a piece of paper without anyone looking and shows Frank the "new evidence" which causes Frank to quickly change his mind. Margaret is aghast at Frank's sudden reversal, but when he shows her the paper, she too abruptly changes her tune, and the hearing is adjourned.

Crumpling up the paper and throwing it on the floor, Margaret storms out in disgust with Frank following, while Mitchell invites everyone for a drink. As Henry asks Hawkeye and Trapper what their "new evidence" was, Radar picks up the paper, opens it and reads aloud:

"Dear Mrs. Burns, Since you're so proud of your husband as an officer, it is sad to report that he is frequently out of uniform, and maybe you should know with whom."

In other words, Hawkeye and Trapper threatened to tell Louise about Margaret if Frank continued to advance the charges against Henry.

The trial is over, and an exonerated Henry returns to the 4077th with General Mitchell. The entire camp turns out in formation to greet them-- all wearing Style-Rite wingtip shoes. 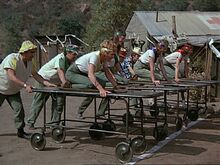 The gurney race at the starting post. Nearest to camera is Girl Away (yellow), then Bouncing Betty (green), Gal O' War (blue) and Hawk's Pride (red). 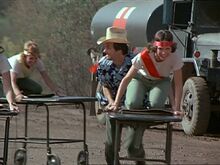 Hawk's Pride. Leads most of the way but came in second. 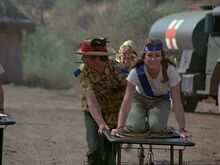 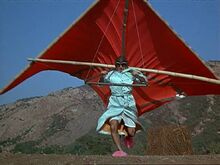 Klinger attempting to escape on a hang glider. "Like a big red bird with fuzzy pink feet." 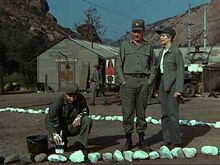 One of Jeff Maxwell's favorite scenes. Frank orders Igor to paint the stones white but Margaret reminds him that it is against air-raid regulations. So Frank tells Igor to paint only one side of each stone and "turn them over at night!" In the background, Frank has a group of men performing rifle drill. 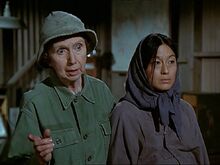 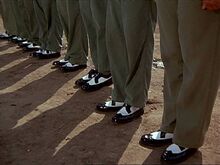 A formation of style-rite wingtips welcomes Henry and General Mitchell when Henry is cleared of the charges.
Community content is available under CC-BY-SA unless otherwise noted.
Advertisement