To Market, To Market

To Market, To Market

To Market, To Market was the second episode of Season 1 of M*A*S*H TV series, the second overall in the series. The episode was written by Burt Styler and directed by Michael Herlihy, and first aired on CBS-TV on September 24, 1972. Although the second episode to be broadcast, it was actually the third to be produced.

The black market has made off with the 4077th's supply of hydrocortisone, so Hawkeye and Trapper make a deal with the marketeers to trade Henry's vintage desk for the supplies.

Pierce and McIntyre are in the OR operating on a two star general. As the operation progresses the general becomes shocky, Hawkeye orders the plasma to be pushed in and for hydrocortisone. The nurse tells him that they are out, when told to get another one she informs him there is no more. After the session, Pierce and McIntyre head over to supply wanting to know why the hydrocortisone wasn't ordered for the latest shipment. Major Houlihan says she did the requisition and that she ordered the hydrocortisone. Major Burns comes in and adds that it, along with half of all the rest of the supplies, was hijacked by the black market. Burns then informs them that there is a truck of supplies waiting to be unloaded outside.

When the two get there, they discover the truck is empty; they then go to Blake's office to tell him of the theft. When they walk in they see that Blake has a 100 year old oak desk, which he is giving serious attention to. They tell Blake about the theft and he asks them what they want him to do. They suggest that he call General Hammond and demand some action. Blake says he can't do that. Radar comes in and tells Blake that there is a phone call from General Hammond. Blake asks Hammond for more hydrocortisone, but Hammond says no as they have already been sent two supply shipments.

Radar finds the name of a black marketeer, Charlie Lee, who Pierce and McIntyre go to see in Seoul. Right after entering his building, they decide to go back outside and hire somebody to look after the jeep. By the time they get there, about ten seconds after leaving, the jeep has already been stripped to the frame. They meet Charlie Lee and ask him about hydrocortisone. He says that he has a box and that it costs $10,000. After a series of offers which are no match for what Charlie already has or can beat, they offer to trade the hydrocortisone for Blake's desk.

Charlie Lee shows up at the 4077 dressed as a South Korean General. Lee is inspecting the desk while Blake tells him about it. Pierce and McIntyre ask how he got it in the room as it is obviously to big to fit through the door. Meanwhile, Burns tells Lee's driver to move his jeep. After a quick argument over his rank Lee's driver pulls up his pant leg and shows a multitude of watches which he tries to sell to Burns. He then asks Burns if he wants to sell a watch. Lee agrees to the trade, but the desk must be ready to be put on his truck at exactly 0600 the next morning. As he leaves Burns and Houlihan are talking, Burns is sure that they are up to something but doesn't know what.

Radar wakes Pierce and McIntyre up at five am the next morning. They sneak out of The Swamp and into Blake's office. While they are working to take the desk apart Burns comes by to check up on the office and meets up with Houlihan. As they head off to the supply tent, Burns locks the door. Radar goes out to try to convince the truck driver to wait for the desk. Pierce and McIntyre cut down a wall in Blake's office and carry out the desk. Before they can get it on the truck, Burns recognizes the driver as the same guy who tried to sell him a watch the previous day and tells him to leave or he will call the MPs.

Burns comes around the building to find Pierce and McIntyre on their knees pretending to pray at the desk which they covered up. When Pierce and McIntyre catch up to Radar, he tells them that the truck already left. Pierce tells Radar to get O'Brien.

Blake and Burns go to Blake's office and find the desk is gone. As they go out the wall that has been cut down, they notice the desk, attached to a helicopter, fly by.

Charlie Lee shows up with two hundred vials of hydrocortisone. Blake comes up and tells them that the insurance company will pay off on the desk if he can give them a believable explanation. He seems to recognize Lee and asks him if he has a relative who is a General in the South Korean Army, but Lee tells him, "You know how it is. We all look alike." 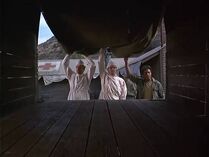 Trapper and Hawkeye look into the truck carrying the hydrocortisone and find it empty. Next to them is John C. Johnson as the truck driver. 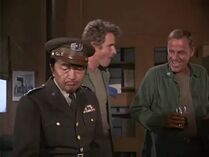 A close up showing the detail of Charlie Lee's South Korean 3-Star General's uniform. Some think it is a Chief Warrant Officer's insignia serving as the cap badge, but it is actually a genuine ROK officer's cap badge - the red and blue enamel of the "taegeuk" symbol at the center of the badge can just be seen. 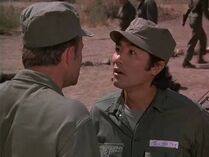 Robert Ito as Lin, Charlie's driver. Looks like the word "Lin" can just be seen as the first word on the white tape on his uniform. 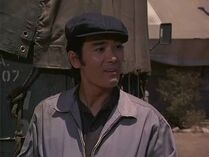 Lin again, this time driving the truck that is to take Henry's table away. They don't manage to load the truck up because Frank intervenes, but Lin distracts Frank long enough for Hawkeye and Trapper to sneak off with the desk in another direction. 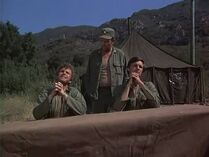 Frank stumbles on Trapper and Hawkeye with the desk. They say they are attending morning mass. Frank is convinced enough to remove his cap. 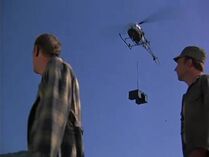 Henry and Frank looking bewildered as the chopper flies over them carrying the desk.