"Yankee Doodle Doctor" is an episode from the television series M*A*S*H. It was the 10th episode to be produced but was the sixth episode to be broadcast. It first aired on October 22, 1972, and was rerun April 8, 1973. It was written by Laurence Marks and directed by Hy Averback.

General Clayton wants a documentary to be filmed about the 4077th, but when Hawkeye and Trapper realize the film is to be propaganda, they literally take matters into their hands and ultimately make a film of their own.

Lieutenant Bricker from Special Services is filming a documentary about MASH units. On advice from General Clayton, he arrives in camp looking to include the 4077th in his film.

Hawkeye and Trapper are reluctant to contribute at first, but reconsider when they realize the alternative would be to have Frank get involved.

When wounded arrive, Bricker and his film crew are endlessly getting in the way of the doctors during triage and in the OR, and Bricker is constantly trying to get them to act up for the camera. Also, Frank is asked to narrate the film, and he rehearses in front of Hawkeye and Trapper, uttering the phrases "saints in surgical garb" and "Yankee Doodle Doctor" as he reads the script. It's at this point that Hawkeye and Trapper realize the film is nothing but propaganda.

Trapper is ready to let the whole thing go and just be a part of the film as Bricker wants to do it, but Hawkeye decides he wants to be even more involved, so late that night, using Radar to distract and detain Bricker, Hawkeye and Trapper go to his tent, break into his locker and expose all of the film footage, ruining the film.

The next morning, not knowing who did it at first, Henry is faced with telling General Clayton over the phone, but as he explains what happened and what the vandals left behind, Henry quickly concludes that Hawkeye and Trapper were the culprits, and he and Bricker go to confront them. Bricker is willing and ready to re-shoot the film, but Hawkeye and Trapper want no part of it. Bricker calls them a couple of weirdos, but Hawkeye retorts that at least they come by their weirdness honestly, unlike the phony film Bricker is trying to make. Henry wants to make some compromises, but Bricker is unwilling and decides to scrap the whole film and leave camp. Henry begs Hawkeye and Trapper to reconsider, saying that the film would be a great feather in their caps; they decide they can make it themselves and ask Henry if he can get Bricker to leave the film equipment and crew behind. They convince Henry they can do it, and so the next morning, Hawkeye and Trapper start filming their own movie in earnest.

Once completed, the film makes its debut in the Mess Tent in front of the whole camp and General Clayton. The film begins with Clayton's introduction, after which two nurses stroll past Hawkeye, Trapper and Radar (seemingly in uniform) holding a large banner saying "MASH 4077". Just as the nurses walk by, the three drop the banner to show that none of them were wearing pants. The film Hawkeye and Trapper have made has turned out to be a comedy romp with Hawkeye playing Groucho Marx as the Yankee Doodle Doctor, with Trapper playing Harpo Marx, and Radar as the patient with Nurse Cutler and the others, and with Frank's pre-recorded narration. The following scenes involve Hawkeye as Groucho operating on a patient (Radar) using a hand saw, a ball-peen hammer and a rubber chicken, and later still Hawkeye and Trapper as themselves in hooded robes solemnly walking across the compound to what turns out to be a wild party in the Mess Tent.

The funny parts of the film make Henry and most of the rest of the camp laugh, but General Clayton watches unamused, as do Frank and Margaret. But then the film ends on a somber note, with Hawkeye looking directly into the camera as he talks about one of his patients:

"Three hours ago this man was in a battle. Two hours ago we operated on him. He's got a 50-50 chance. We win some, we lose some. That's what it's all about: No promises, no guaranteed survival, no 'saints in surgical garb'. Our willingness, our experience, our technique are not enough. Guns and bombs and anti-personnel mines have more power to take life than we have to preserve it. Not a very happy ending for a movie, but then no war is a movie."

Clayton is not thrilled, but he also admits that it wasn't all bad; he orders his intro and Hawkeye's dialogue at the end be saved, but wants the rest of it destroyed, but then also orders a copy of the whole film for himself, saying, "We gotta have something to laugh at when this whole thing is over."

This is one of the first episodes of M*A*S*H to deal strongly with anti-war themes.[1] In April 1973, this episode was cited by Newsweek as an example of "irony at its most abrasive".[2]

During the part of the comic movie, Groucho Pierce is "operating" on Radar with a saw, he says a line after "You'll be a better man for this." that usually comes out as intelligible. However, closed captioning has deciphered it as "Woodsman, spare that tree.", which was an old Victorian parlour song from 1837. 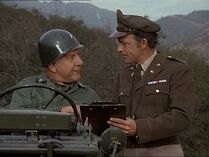 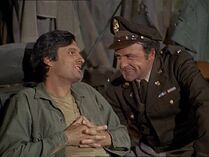 Bricker tries to persuade Hawkeye to star in the show. 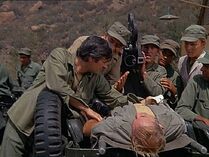 Nice triage scene. Hawkeye and Bricker to the left. Martin with the camera in the center. To the right, in the white coat is probably Tom Sparks as the unnamed corpsman. There are several corpsman in the episode but this one gets the most screen time so it is likely to be the one credited. 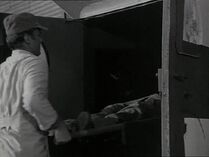 This is the same corpsman again, this time starring in Hawkeye's production. 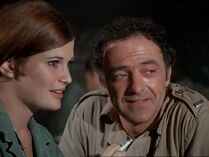 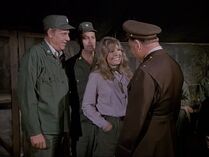 Margaret and the others greet General Clayton who has come to watch the premiere of Hawkeye's film.
Add a photo to this gallery

Retrieved from "https://mash.fandom.com/wiki/Yankee_Doodle_Doctor_(TV_series_episode)?oldid=23285"
Community content is available under CC-BY-SA unless otherwise noted.